A journey through Tobias World

3-year-old Minnehaha boy will be focus of yearlong series

Tobias Adams isn’t one for a measured reaction. When he’s excited about something, you’ll know it.

Boy, will you know it.

His mom, Jasmine Adams, asked the big question just after Tobias and his cadre of siblings, cousins and friends arrived for the celebration: “Want me to hold your candy while you jump?”

Tobias pumped his fist in the air, and with more volume than seemed possible from his little lungs, he let out a shriek.

“YES!” he shouted. “I. LOVE. JUMPING!!” He hopped in place a few times to really drive the message home. And then off he went in socked feet, slip-sliding up the ramp of the nearest bouncy castle, his T-shirt emblazoned with “Mom is my superhero” bunching up as he tumbled back down.

With Tobias, that level of enthusiasm is par for the course. He feels strongly. He reacts accordingly.

“He has the energy that you would assume any 3-year-old boy has,” Jasmine said, “times five.”

The indomitable nature of the mighty Tobias will likely come in handy.

As a freshly minted 3-year-old, he’s staring down a big year. He’ll be trying out for a Lil’ Kickers soccer team soon, his first big organized athletic endeavor. His hair, currently worn wound into a bun at the back of his head, is about to be lopped off in his first haircut. He’s set to start preschool in the fall. He might even learn how to ride a bike.

All that, on top of the huge stuff already happening. He just started to sleep in his first big-boy bed. He just went on his first train ride, all the way to Seattle.

What a time to be Tobias.

The Adams family includes four people: Tobias, Jasmine, her husband, Matt, and her daughter, 7-year-old Arianna. They live in a Minnehaha apartment where Tobias and his sister share a bedroom. The decor is split straight down the middle — his side is blue, her side is pink.

Matt works as machine operator at a warehouse that makes hospital equipment. Jasmine is a stay-at-home mom and travel agent, working remotely to book trips for clients. She also has spinal muscular atrophy, a genetic disease that affects the nervous system’s ability to control voluntary muscle movement. She uses a wheelchair.

So far, Tobias’ world revolves around his relationships with others. Mimicking Matt, he learns to brush his teeth. Playing pretend with Arianna, he learns to use his imagination to transform the living room into a school bus. But his orbit extends outside of the core family, too, to the Adams’ network of relatives nearby. Tobias’ grandparents and an uncle live in Castle Rock, and another uncle lives in Portland. A few are farther away — in Pullman — but still a car ride away. As a result, Tobias and Arianna are growing up alongside a pack of cousins.

Though he’s just barely transitioned from toddlerhood, Jasmine recently noticed an uptick in her son’s attention span. His tolerance for long, quiet activities is starting to improve, and he’s picked up an affinity for puzzles. He’ll sit and do one from start to finish, she says proudly.

But Tobias’ defining quality is that he’s not even the tiniest bit self-conscious, even for someone his age. He just has no fear, Jasmine said. Where Arianna was more reserved, Tobias tramples through life.

“His outgoing personality is the most unique thing about him. Just the way he can interact with and communicate is not like the average kid,” Jasmine laughed. “I think that’s just by nature. He’s an Aries.”

It’s hard to overstate just how consequential our fourth year on this planet is in shaping the person we eventually become.

Physical, social, emotional and mental development are all in hyperdrive. The way those skills develop, intertwine and manifest as outward behavior varies from child to child — there’s no such thing as a typical 3-year-old. Children learn and grow at different rates, and like everyone have strengths and weaknesses.

Sara Waters, an assistant professor of human development at Washington State University Vancouver, is an expert in how the first few years lay the groundwork for the rest of our lives. She said our early relationship with our caregivers helps shape our relationship to the world around us, and our place within it.

It’s the “fired together, wired together” principle of brain development, she said — the pathways we form and reinforce early on become the framework for how we live our lives.

According to Kimbree Brown, early learning program manager of the Childhood Development Program at WSU Vancouver, 3 is the age when kids really start to establish their own agency as individuals.

They start to make choices. They start to pursue different courses of action based on their own internal process, instead of just mimicking what they see in adults and other kids, and they start to form more complex opinions.

This is the point, for instance, when many kids start to nurture early seeds of empathy.

Say a 3-year-old sees a friend crying and walks over to pat them on the shoulder. It would appear a simple gesture to the casual observer, but it’s the culmination of a series of distinct, complicated skills: The child would need to recognize the physical signs of sadness in another person’s face. They need to be able to self-regulate their own emotions, and keep from crying in response. They need to put themselves in another person’s shoes, and think about what they would want if they were sad. Then they need to actually make the decision to take an action to try and make that person feel better. A gentle shoulder pat stems from a web of emotional literacy, foresight and imagination.

It’s a big task, for such a little one. Some children get there faster than others.

“That is going to look different for each kid. It’s not that at 3, exactly, these skills will come online,” Waters explained.

“There’s kind of a developmental range, if you will. Some kids are going to develop these skills sooner than we would think of as typical, some kids might take a little more time, but it can all be in a kind of typical developmental range. You’ll see some of each of that at 3.”

An early sign of that ability? Taking turns. When Tobias waited his turn to jump in and out of a playhouse with his cousins at his birthday party, he demonstrated a form of empathy — of weighing other’s wants and needs, instead of just his own. These early kernels of consideration eventually transition into more complex forms of friendship and connection with peers.

The same idea applies to physical development. Bodies, and kids’ understanding of their own bodies, change at this age, too.

By the time the third birthday rolls around, most kids are good runners. They can usually hop, and some can jump high off both legs and land safely. Tobias, if his JJ Jump exploits are any kind of indication, definitely falls in this camp.

A 3-year-old tends to generally be aware of his or her body in space, but can struggle with the details — they might be able to pull on their own sweater, but they’ll probably shove their arm into the wrong hole. They can pour their own juice, but half the pitcher might end up on the table.

At that age, fine motor skills are also starting to come together.

“They’re moving from just scribbles, to actually being able to hold a pen or pencil to write letters,” Brown explained. Drawings might start to look more like actual objects, too. Instead of blobs of color, parents might be able to make out a picture of a house, or a sun, or a self-portrait. 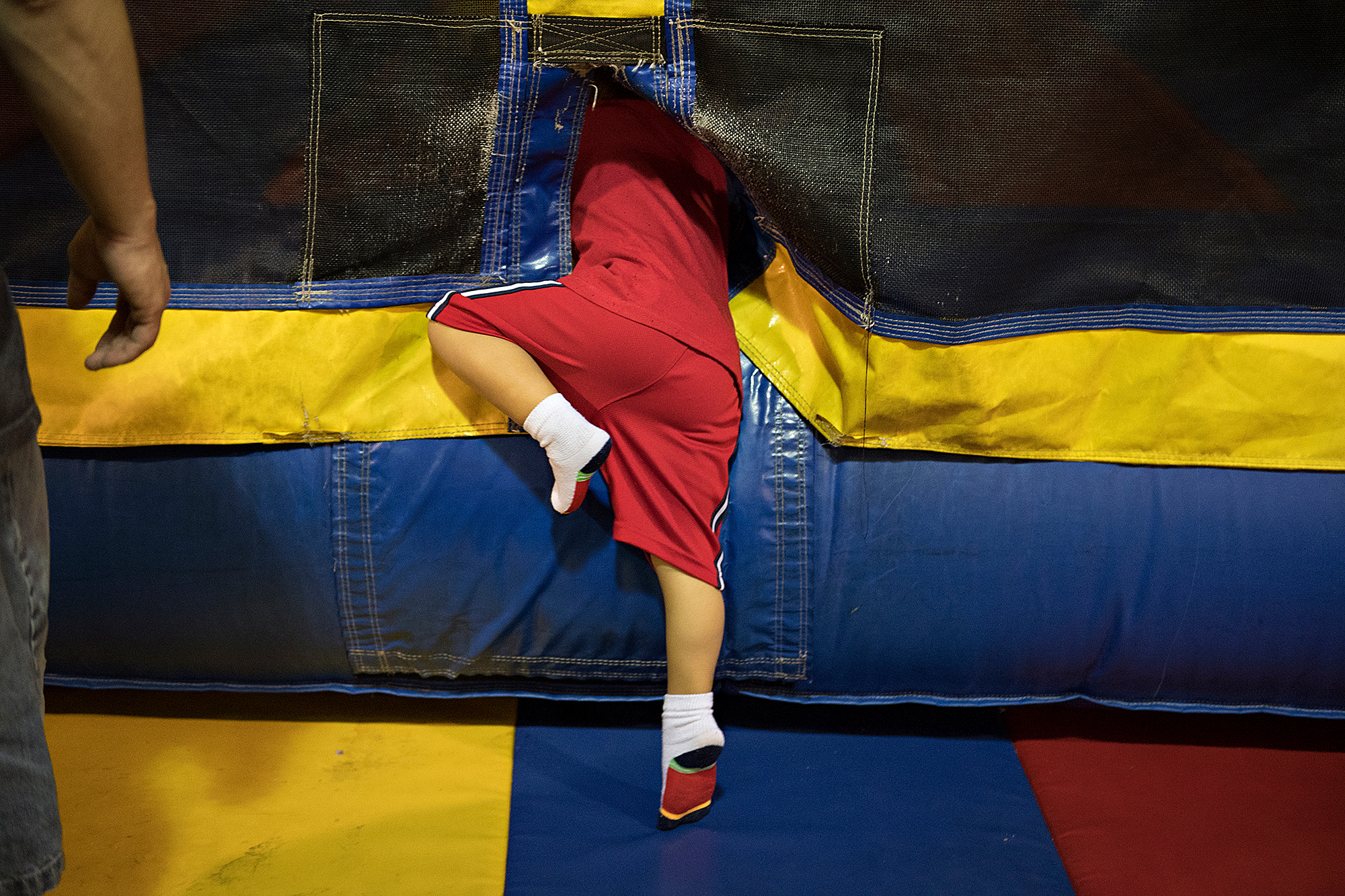 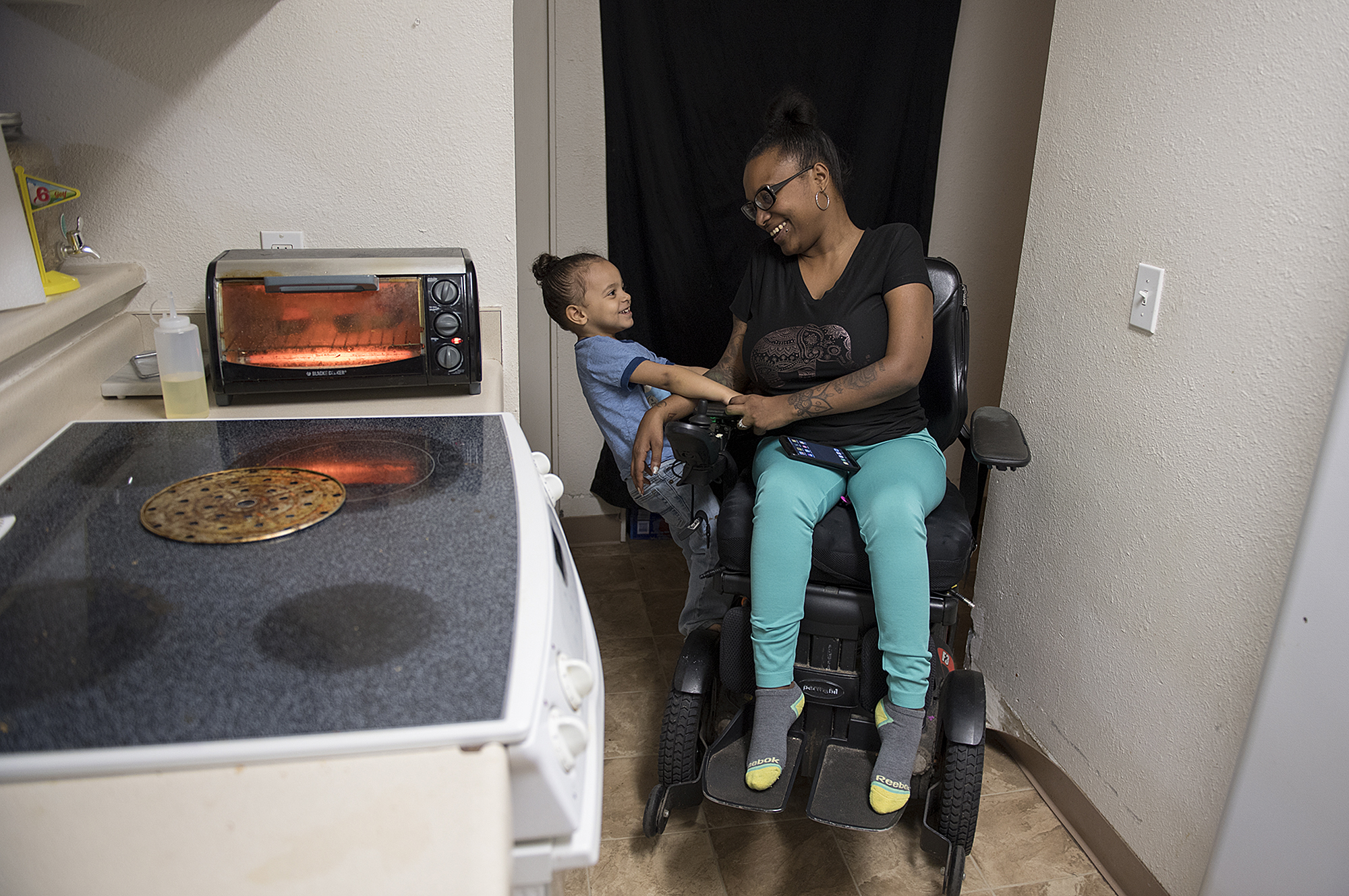 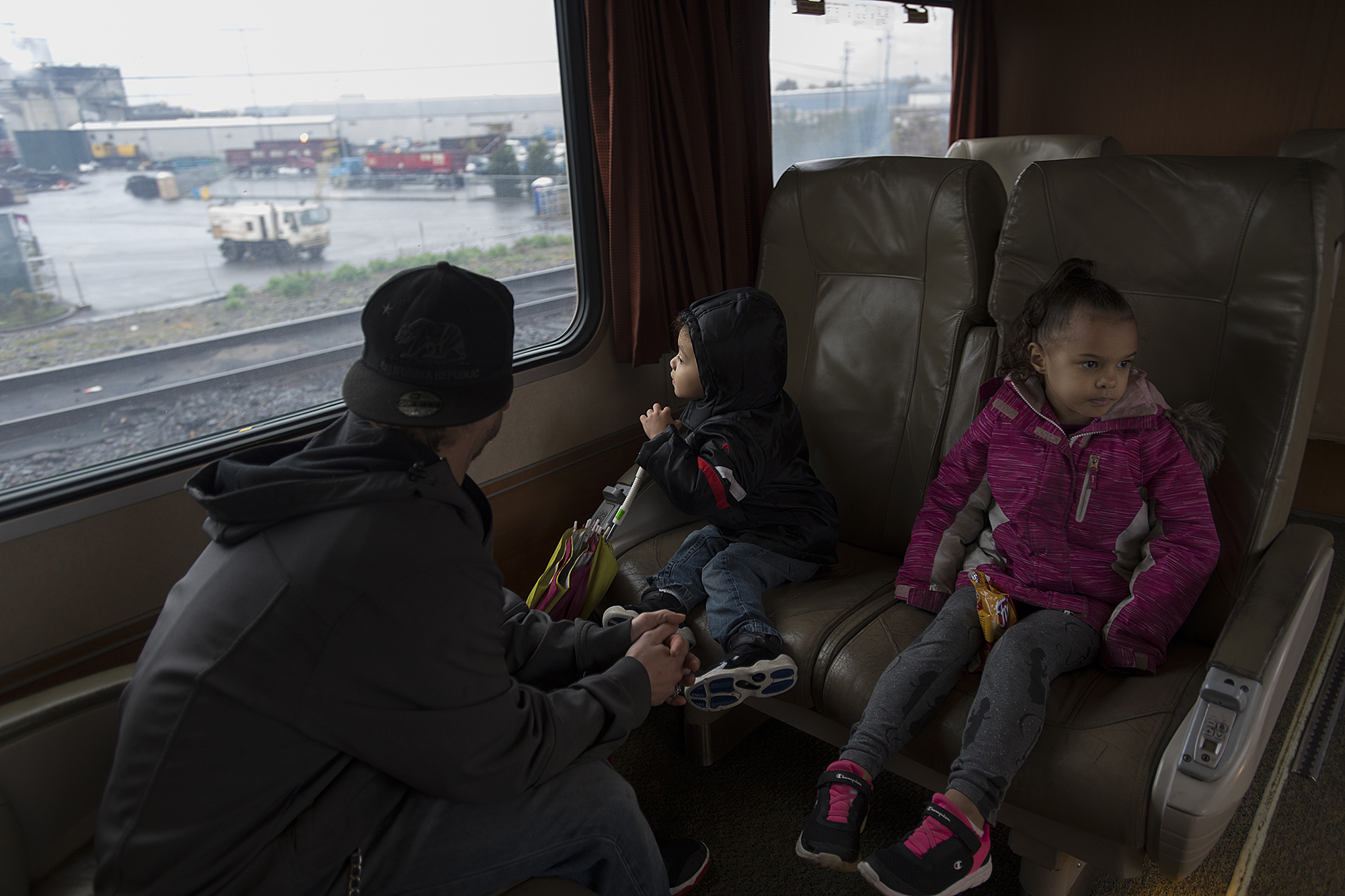 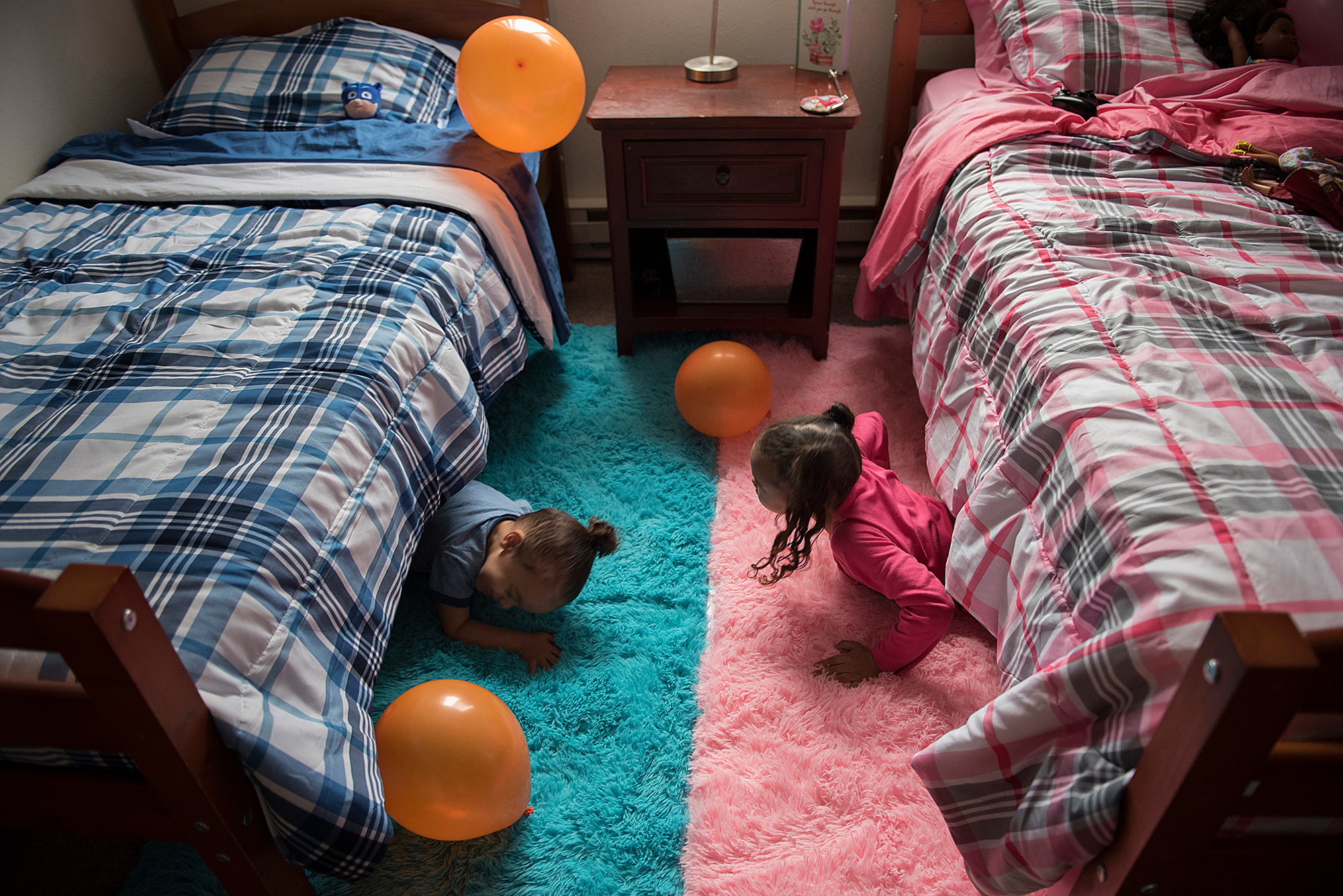 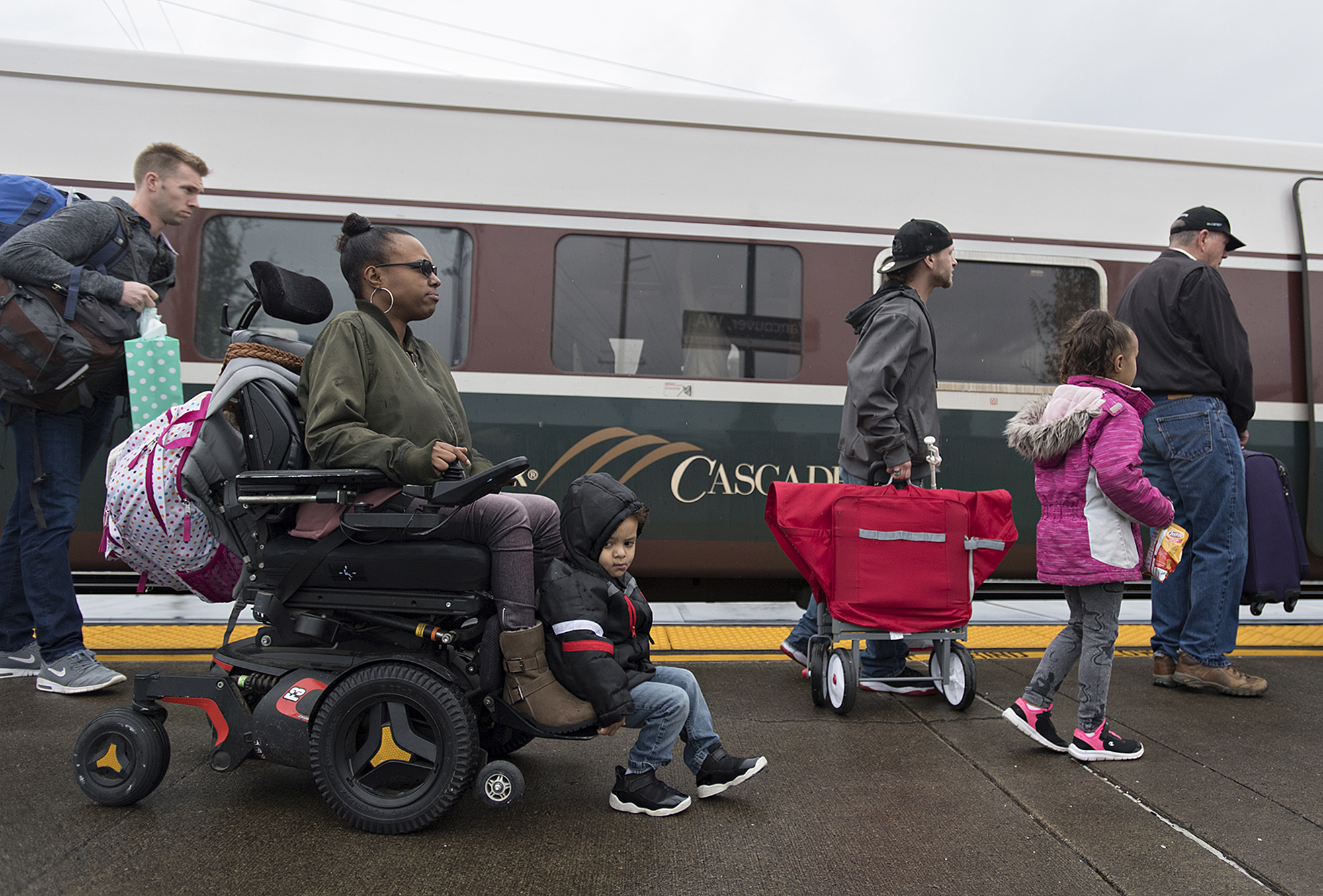 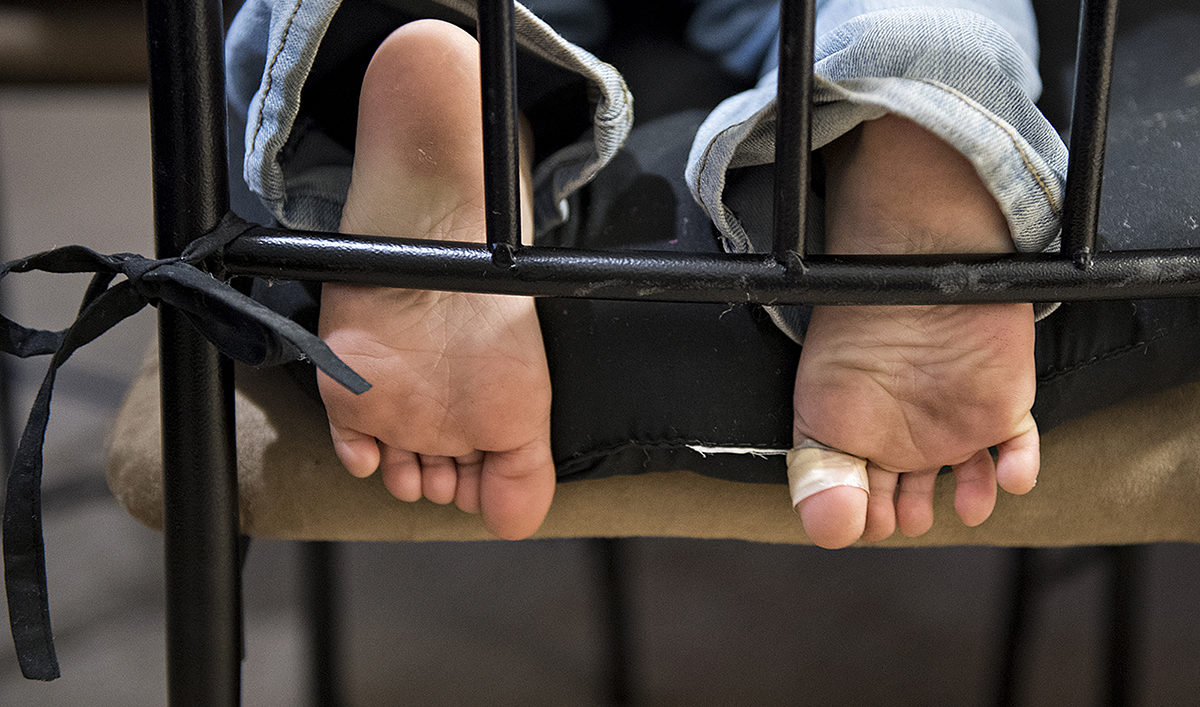 Tobias is a very physical kid by most metrics. He loves to dance, and as a Play-Doh aficionado spends lots of time interacting with his hands. But when it came time to tackle the pile of birthday presents, he needed an assist from the grown-ups in the room to get through the tape, paper and ribbons.

But who doesn’t need a little help now and then? Even — especially — when the box is full of Marvel Avengers action figures.

This year Tobias will face hurdles big and small. He’ll rack up accomplishments that might feel minor to other people, but to him will feel titanic. He’ll giggle and do somersaults and throw tantrums.

Back in January, we sent out a call: “Is your son or daughter turning 3 years old soon? The Columbian is looking for a child to follow during the third year of his or her life as part of a series examining what it’s like to be a 3-year-old in Clark County.”

We received an outpouring of responses from parents, and we sat down with a few families from around the region before selecting Tobias and the rest of the Adams clan.

We chose to spotlight a 3-year-old because kids undergo tremendous changes in their emotional, social, mental and physical development as they transition from toddlerhood to childhood. They also undergo more subtle changes. But when you’re 3, the small ones feel big, too, so we want to be there for all of them.

Also, 3-year-olds are goofy and awfully fun to write about. Which doesn’t hurt.

We’ll follow Tobias through his fourth birthday, including regular check-ins that will track the milestones in his developing world. Of course, every child is different, but we hope that family, caregivers, friends and loved ones of little ones around Clark County find moments along this journey that they can relate to.

The monks of White Salmon

by Patty Hastings
Next: Austin Justin

A walk in progress