A walk in progress

A year and a half after corrective surgery, 6-year-old Austin Justin keeps moving the progress goalposts, one step at a time

Austin Justin crawls onto the scratched metal bleachers at Mountain View Ice Arena in Vancouver, ready to take the rink.

“Let’s see if I remember how to do this,” Fich says.

“I do,” Austin responds.

Austin is familiar with an ice rink, but he also feels at home shooting on his Little Tikes plastic basketball hoop, or on the baseball diamond in Miracle League, or pretending to score touchdowns in his front yard in Brush Prairie.

Austin may be a typical young sports enthusiast, but it is his persistence and confidence in the face of disability that makes him stand out.

Austin was born with a genetic disorder called unknown muscle myopathy. He was born with twisted legs and clubbed feet. He underwent surgery to correct his feet, and braces keep his feet in proper position.

Essentially, the ebullient Austin navigates the world without hip or calf muscles, and with leg tendons so tight his legs were bent at a 70 degree angle when he was born. Corrective surgery at Shriners Hospitals for Children in Portland about 18 months ago reduced the bend to 10 percent, and Austin now has less restrictive braces.

The braces are decorated with a Seattle Seahawks logo.

When Austin was born, doctors thought he had no chance of walking. Now he can take about four steps on his own, and he regularly stands by himself, according to his mom. He uses a walker and crutches to get around, or does a bear crawl, placing clenched fists on the ground to maneuver.

The corrective surgery Austin received is the same one his mother underwent when she was 15. Tabitha Fich walked with a hunched back and utilized a walker or wheelchair occasionally. Now she walks completely free of assistance.

In the same way mother and son have battled their myopathy, they’ve also found solace on the baseball field. Fich played in the Challenger League for eight years growing up. That’s similar to the Miracle League Austin started playing in this year. Miracle League is an organization that provides children with disabilities the opportunity to play baseball through the help of “buddies” who assist players in hitting the ball or running the bases.

Fich says she progressed from walker to crutches to standing “tall and upright” by herself while playing baseball.

“They made it as close to a regular team as possible,” Fich says. “Even though we had our own little challenges, we felt like everybody else out there playing. Some people don’t get to do certain things, and we’re out there like everybody else, being part of a huge group. You don’t really think about yourself and how your disability is. You’re out there and watching everybody else and you’re like, ‘Oh, I’m doing this too.’ And it’s really cool.”

“He’s so active and independent,” she says. “He wants to do everything.”

Fich isn’t far off when she says “everything.” Austin says he doesn’t like golf, but outside of that, nearly every major sport interests him. He’s been playing hockey for a couple of years. He started with sled hockey, but last year, he skated by himself without a sled for the first time at Lloyd Center in Portland. His stepfather, Nate Streitt, was nearby for help, and Fich took pictures.

That’s one out of many times Austin has proved his mom wrong about what he can accomplish. She said Austin progress so quickly because of his determination, as well as his ability to bounce back if he doesn’t succeed initially.

“There were times where I used to be like, ‘No you can’t do that,’ or ‘I don’t think that’s possible,’ and he proves me wrong every time,” Fich said. “That’s not in my vocabulary anymore, because he just shuts me down.”

Austin gets motivated watching professional sports. He’s got lots of confidence, which is clear if you watch him dribble and shoot around on his mini plastic basketball hoop. He’ll compare himself to Golden State Warriors’ point guard Steph Curry, one of the best shooters in the history of basketball. He’ll wrap black tape around his wrist to make it look like he’s wearing a wrist band.

“This is making me a professional shooter now,” Austin says.

When Austin swishes shots, he pumps himself up.

“This is in for sure,” Austin proclaims.

“Downtown,” he exclaims a second later.

Austin says that proving people wrong is a big motivator and something he enjoys doing. Austin asked to be pitched to in Miracle League instead of hitting off the tee, an extremely rare occurrence for his age in the league. He says he wants to do everything by himself.

He’s already accrued a couple of outfield hits in the young baseball season, and he fills his time at home time by shooting and dribbling, since the NBA playoffs are going on. 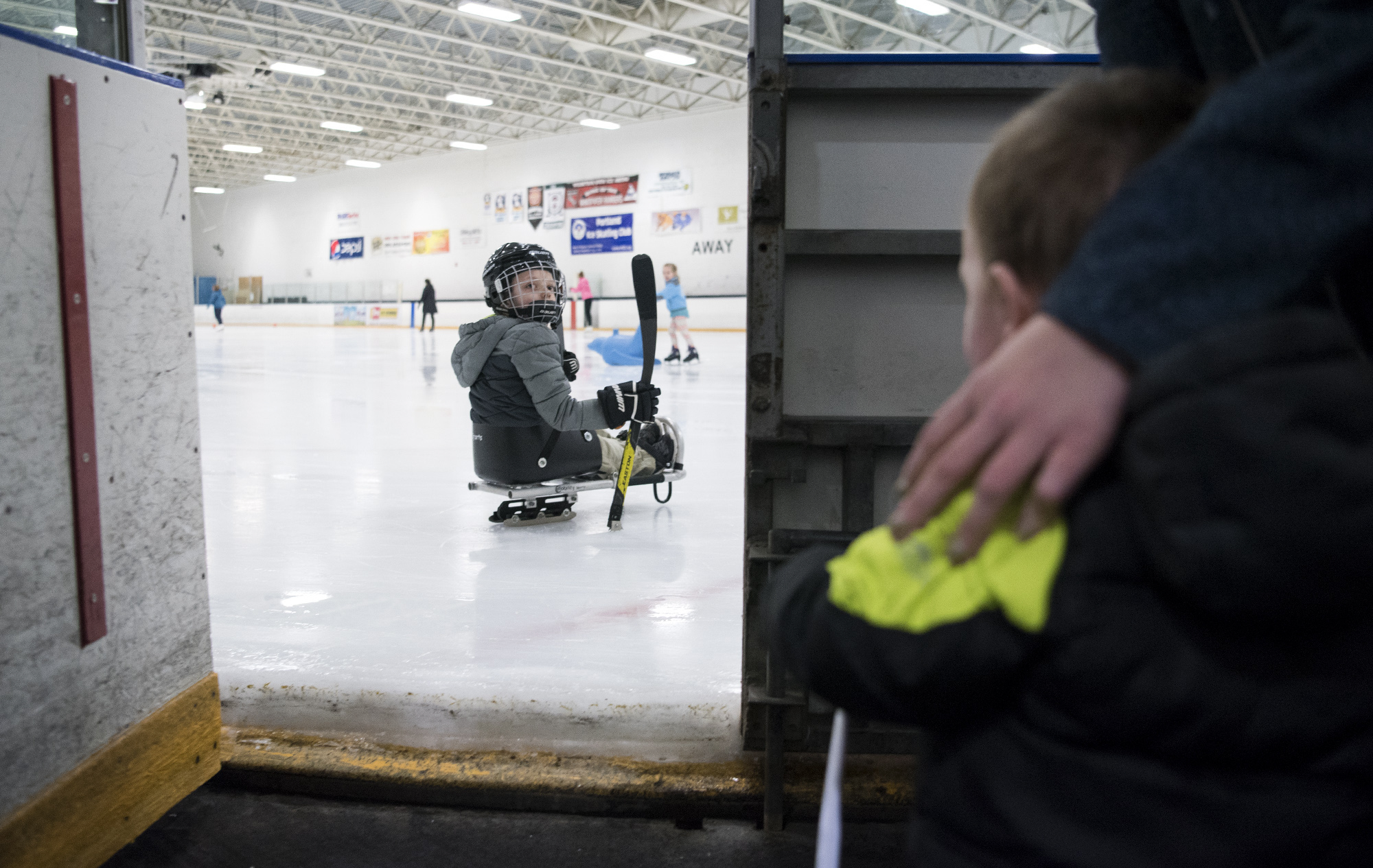 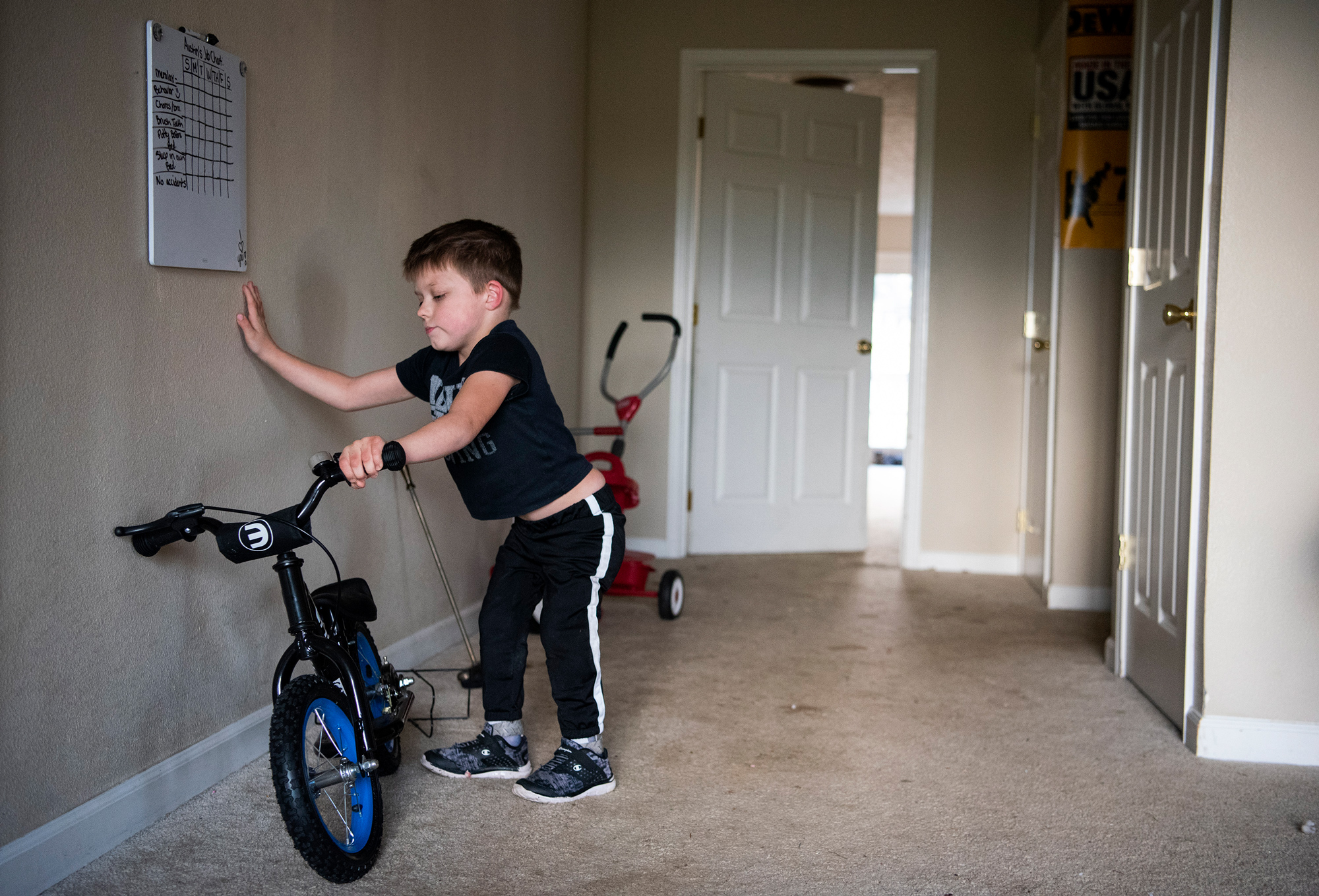 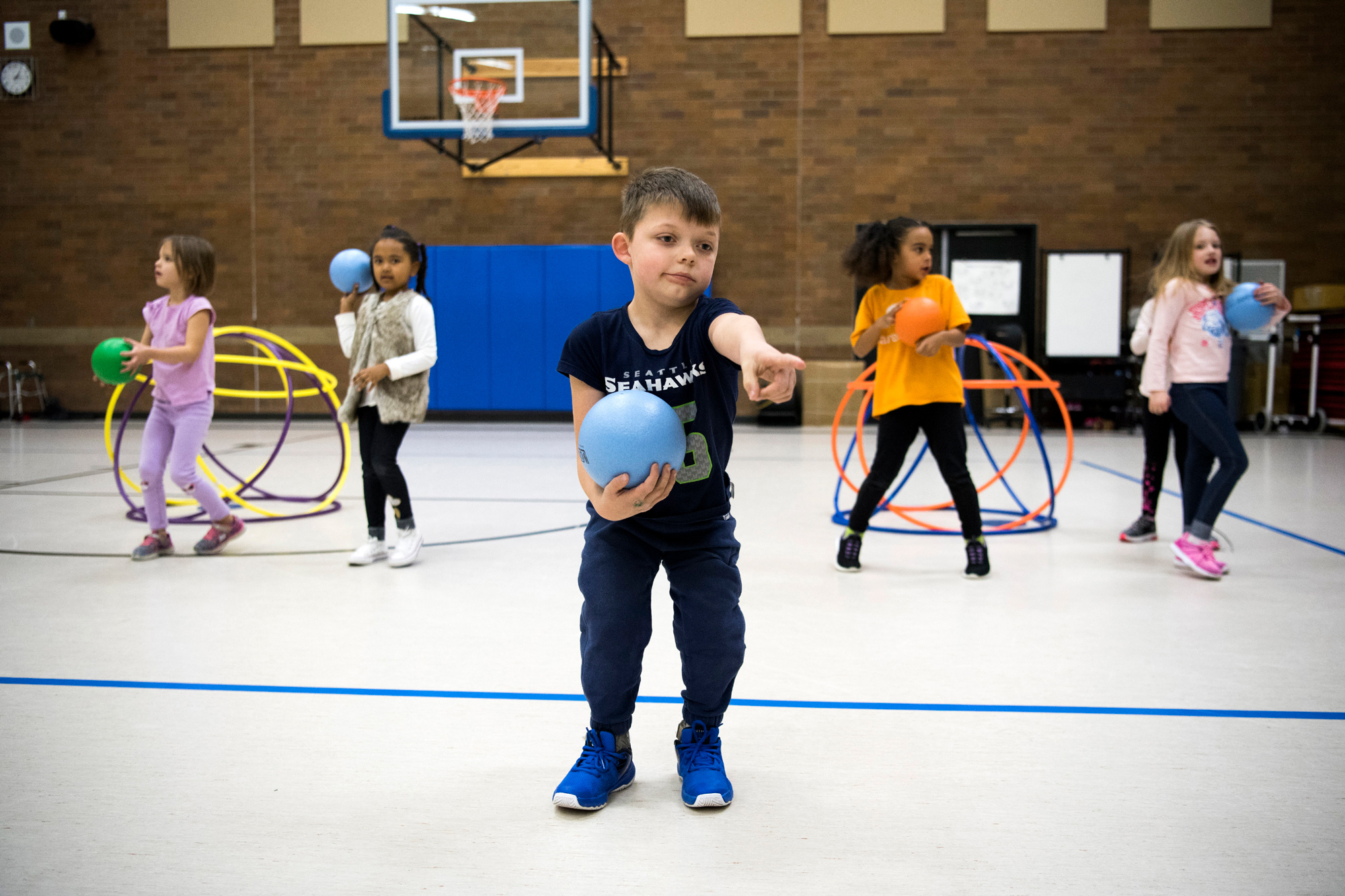 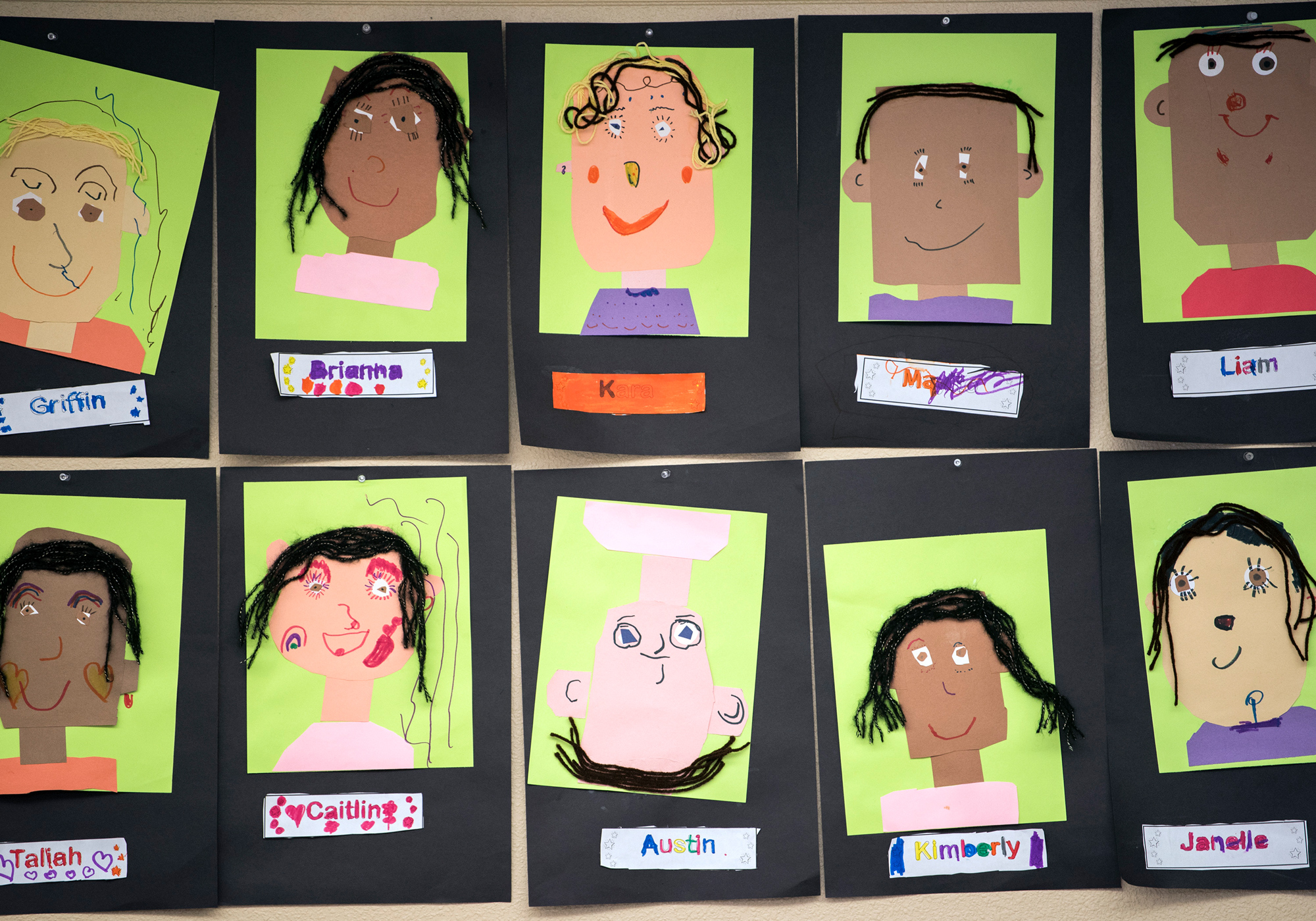 “He watches all the pro sports, and I think looking up to all of those guys, he really is like, ‘I want to do that,’ ” Fich adds. “For the longest time, he always said, ‘I want to be in the NFL and be a quarterback.’ Just watching the pros and in his eyes, ‘I can do this if I really want to.’ ”

Austin says his physical progression feels good, but adds there’s only one problem: He can’t shoot on 10-foot basketball hoops yet.

Austin says he’ll probably be able to do that by the next school year.

Fich says Austin has progressed so well after his surgery that he graduated from physical therapy in six months. Austin had 30 minute physical therapy sessions, but he would regularly complete them in 15 minutes. His physical therapist eventually didn’t know what to do with him.

Fich says Austin constantly moves the goalposts, when it comes to his future health outcomes. That makes it tough for doctors to foresee exactly what he could do next.

With those improvements his mom is pushing him to be even more independent. Austin is cleaning up after himself more after he eats now, dressing himself more, and going to the bathroom by himself at home more.

“I can’t baby him forever, and he does need to get tougher and know that he can do all these things on his own,” Fich said. “I know he can, because I’ve seen him.”

On a sunny May day, Fich’s tough love is on display when she plays basketball with Austin on his mini hoop near their garage. At the end of the game, Austin will brag and holler “whoop, whoop,” before proclaiming that he beat his mom 5-2, even though no one was actually keeping score.

But at one point in the game, while Austin is dribbling, Fich steals the ball from him. Austin tells her she can’t do that. She reminds Austin she most certainly can, and she won’t be the last person to try.

“You can’t just expect it,” she says. “People aren’t just going to give it to you. You’ve got to work for it.” 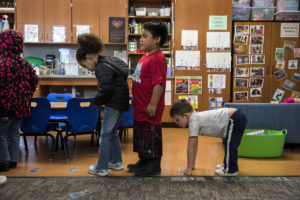 Previous: Being 3 in Clark County

A journey through Tobias World

by Calley Hair
Next: Graduates

Superheroes in the halls

by Katie Gillespie and Adam Littman