Vancouver leader devotes herself to position

Most days, Vancouver Mayor Anne McEnerny-Ogle starts her day at 7 a.m., and there’s barely enough room on her calendar to fit in the tasks before her. A meeting here, a ribbon-cutting there, a cultural festival or two squeezed between answering emails and coffee meetings. She gets home many nights at 8 p.m. When the city council meets, it can be even later.

Then there’s the weekly tradition with her husband, Terry Ogle, baking eight dozen cupcakes for Vancouver’s unhoused population. She still volunteers four hours a month with Neighbors On Watch to patrol the community. All while juggling many of the same issues as Portland to the south: homelessness, affordable housing, controversial infrastructure projects.

In the city of Vancouver, being mayor is a part-time job.

But for McEnerny-Ogle, it’s her life.

‘I would have a problem doing less’

“I’ve had limited interaction with Mayor McEnerny-Ogle throughout the past year, and have purposefully distanced myself from city business, so as to provide the Mayor the ‘space’ to establish herself.
“My observation from afar is that Mayor McEnerny-Ogle is doing a fine job representing the city council and city organization to the public and to the city’s partners.
“There certainly is a learning curve and adjustment to serving as mayor, particularly for a large, growing and dynamic city.
“A full-time commitment is foundational to success in the position.
“Anne has the availability and capability to be a fine mayor of Vancouver, and I believe she is off to a good start.”
Former Vancouver Mayor Tim Leavitt

McEnerny-Ogle made history a year ago when she was elected Vancouver’s first female mayor.

In the aftermath, she’s thrown herself into the job during one of the most turbulent times in the city’s history. As Vancouver faces affordable housing shortages, rapid development and tough conversations about replacing the Interstate 5 Bridge, McEnerny-Ogle has prioritized relationships, showing a public face and, occasionally, diplomacy by baked goods.

In spite of the long hours, she said it’s just part of the job.

“I would have a problem doing less,” McEnerny-Ogle said as she sat in her living room on a recent weekday. The notion drew a knowing glance and a smile from her husband, who sat beside her.

Legally, she said, the mayor only needs to show up to city council meetings, serve on a board or two and turn everything over to city staff.

“I have to remind myself I have no power,” McEnerny-Ogle said. “I am the same as my colleagues. Just because I’m the mayor doesn’t mean I get special privileges.”

That doesn’t mean she takes it easy. Vancouver has growing pains. The housing vacancy rate is lower than across the river, and rents are only just now stabilizing. And then there’s the bridge. There’s enough happening that former Mayor Tim Leavitt argued the position of mayor had outgrown the city. In 2016, he fought — and lost — for a pay increase comparable with the duties as mayor of the second-largest city in the Portland metro area.

“Very simply, the effort necessary to meet the responsibilities and the accountability that our public demands of the city council, and more specifically the position of mayor, far, far outweighs the scant compensation that is offered,” Leavitt said during the salary review process.

Until the city charter changes and redefines the mayor’s office, McEnerny-Ogle disagrees about the need for a pay bump. But she conceded if the city does ever move forward with long-range plans to annex unincorporated areas adjacent to the city — which would make Vancouver the second-largest city in Washington — there may be grounds for reconsideration. Perhaps then the office of mayor would be full time on paper, and better reflect the demands of the position.

Armed with a new title, McEnerny-Ogle was able to pass through doors that were previously closed.

The doors to the Metropolitan Mayors Consortium meeting, for example. The group consisting of 25 area mayors meets regularly to talk about issues facing the region. Vancouver wasn’t represented. Until now.

“They changed it. For me,” McEnerny-Ogle said.

“I have always found Mayor McEnerny-Ogle to be a warm and kind person. I believe she has exhibited good leadership for the City of Vancouver by bringing some outstanding projects into fruition … even if those projects likely began prior to her leadership.
“Although the Mayor and I may disagree on some issues, I believe she is the kind of leader who will disagree without being disagreeable (which would certainly be my goal, as well).
“I look forward to working with her as mayor of Vancouver in my capacity as Chair of the Clark County Council.” Clark County Council Chair Eileen Quiring

She’s not a voting member, “but I can bring what we’re working on.”

“I’ve been in their homes. I’ve been in the City Halls now. Because it’s all about relationships. They’re making decisions that impact us,” she said.

Working side by side with the metro mayors is emblematic of the goal McEnerny-Ogle set for herself: Build relationships.

It’s paying off. McEnerny-Ogle lists the support by Southwest Washington mayors for an Interstate 5 Bridge replacement project among her top accomplishments. She hopes to build on the cooperative nature of that effort moving forward in other areas.

“I would love that to be our goal in the future,” she said.

Ideally, the regional leadership would work together on legislative priorities as well and figure out what helps everyone, McEnerny-Ogle added.

If those relationships didn’t exist before taking office, you need to hit the ground running, she said.

“You can’t handle the Thanksgiving dinner by yourself. Everyone brings a dish or a side dish, or turkey or dressing or dessert or whatever, then you make it happen,” McEnerny-Ogle said. “And I think that’s one of the things that we realized early on is I don’t care if it’s the waterfront, if it’s affordable housing, if it’s a fire station, all of the different things that come down are all about our mission together.”

She hosts coffee with the mayor events at different locations, with different neighborhoods, trying to reach everyone and anyone that needs to be heard.

“That’s how we solve problems,” she said: by listening.

She’s armed with a cheat sheet talking about all the different things going on in the city to hand out and keep whoever’s interested informed.

Her weekly cheat sheet is double-sided.

It’s not just the mayors of Battle Ground, Camas, La Center, Ridgefield and Washougal that McEnerny-Ogle needs to partner with. Portland’s Mayor Ted Wheeler is a vital connection to building on Vancouver’s successful growth.

“I enjoy working with Mayor Anne McEnerny-Ogle. She is smart, open-minded, direct, focused, and collaborative. The city of Portland and Vancouver have a great working relationship. In the past, Mayor McEnerny-Ogle and I worked together on restarting the conversation on the (Columbia) River Crossing and collaborated on several projects. I look forward to working with her for many more years.”
Portland Mayor Ted Wheeler

Wheeler hasn’t had an easy go of things since taking office. He’s been criticized for his apparent inability to make progress on the challenges facing Portland, many of the same ones facing Vancouver. He’s also suffered public backlash for his handling of right-wing extremists and ongoing protests, as well as a proposal to apply time and place restrictions to any protest he, in his role as police commissioner, deemed violent.

McEnerny-Ogle said she doesn’t envy Wheeler’s job, but she acknowledges they need each other to move the region forward.

When McEnerny-Ogle was elected, she said she’d bring Wheeler a pie if needed to get that relationship going. It didn’t end up taking a pie, but she does offer Wheeler something homemade whenever they talk.

“We do jams and jellies because he does pancakes on Saturday morning with his family,” she said.

The last year has been successful, she said, in terms of building the foundation for a working relationship with Portland.

“We have the same concerns,” she said. But more than anything else, the two mayors use their meetings to talk about what each other is working on. The I-5 Bridge tops the list, as does caring for their own unsheltered populations.

Wheeler and McEnerny-Ogle are set for another meeting this month to catch up.

“I’m sure we’ll talk about some things that are painful for both of us,” she said.

McEnerny-Ogle has some regrets from her first year in the mayor’s office. The biggest? Affordable housing.

“We’ve been working on that for five years,” she said. “It feels like we’re eating an elephant here.”

It’s tough to identify the root of the problem and work with community partners to put solutions in place — or, to continue the elephant metaphor, to “nibble away at this huge meal,” McEnerny-Ogle said.

“It doesn’t look like we’re solving it,” she conceded. “It’s just that this is a whole textbook of math problems, and we’re doing one page at a time.”

Even if the city was making significant progress on tackling homelessness, another issue will always pop up. Businesses want to move to Vancouver but can’t find the right parcel of land, for example, or want city incentives that just don’t exist. On more than one occasion, businesses have complained about a lack of parking and threatened to leave downtown.

“There will never be enough parking downtown,” McEnerny-Ogle said.

And considering the city’s proposed policy to focus on providing visitor parking in lieu of spots for employers, that issue may never be solved for interested businesses exploring Vancouver as the next stop.

Everything takes slow, careful planning. Even if residents and businesses think the city is dragging its feet, McEnerny-Ogle said there’s a reason.

“The moment we try to do something fast, something is forgotten and we didn’t cover all of our bases,” she said. “We don’t want to mess up with quick fixes. People’s lives depend on our decision — quite literally.” 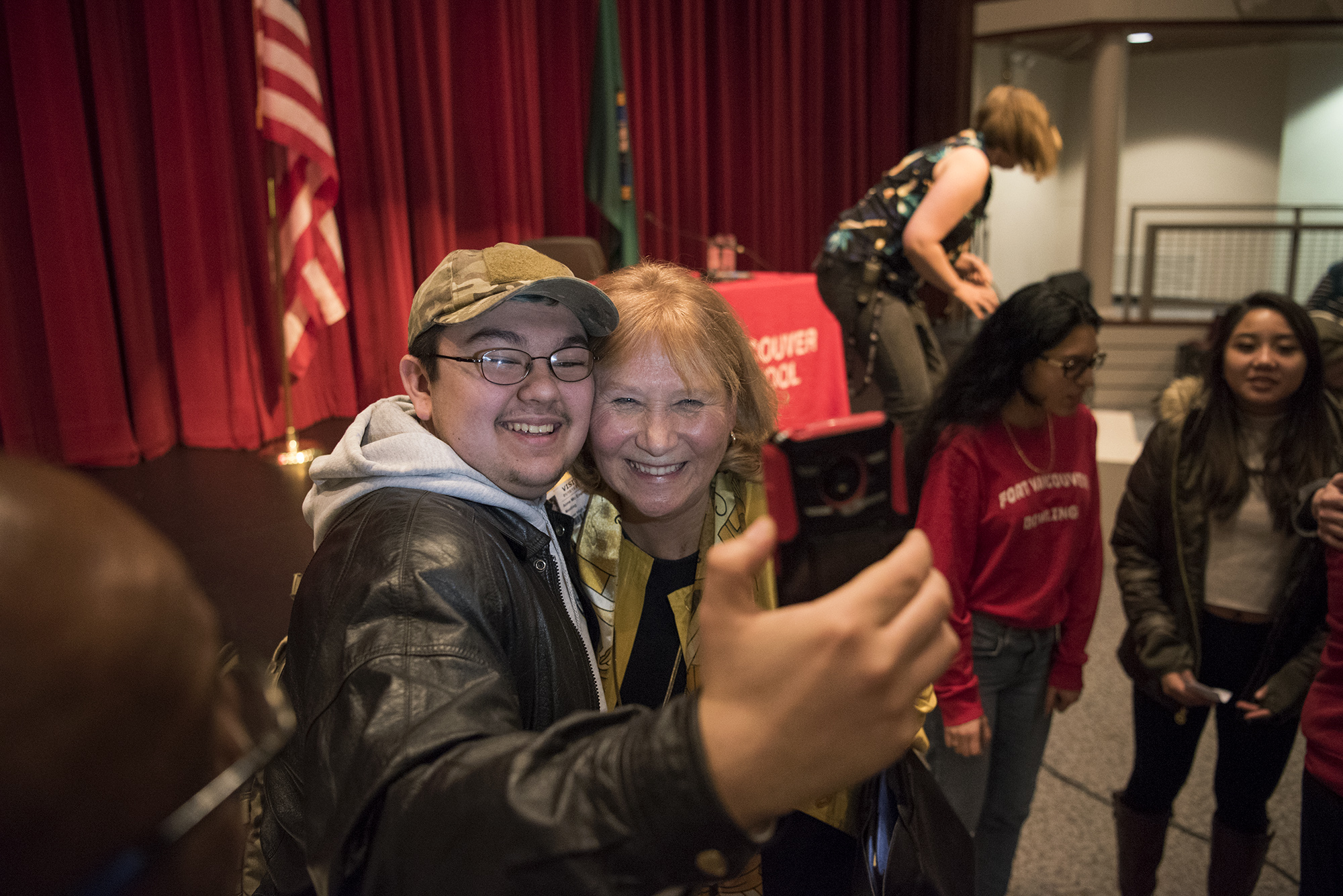 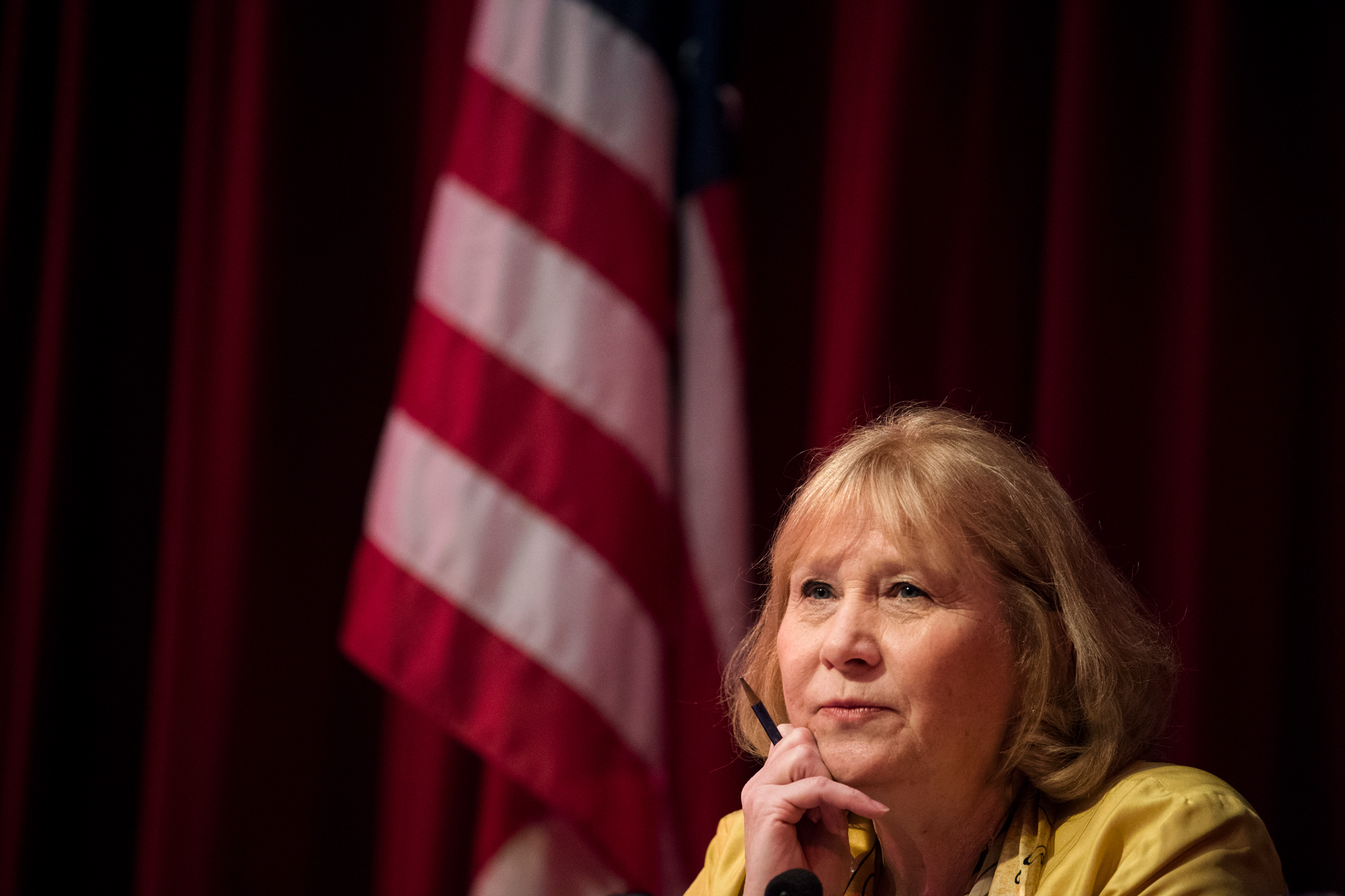 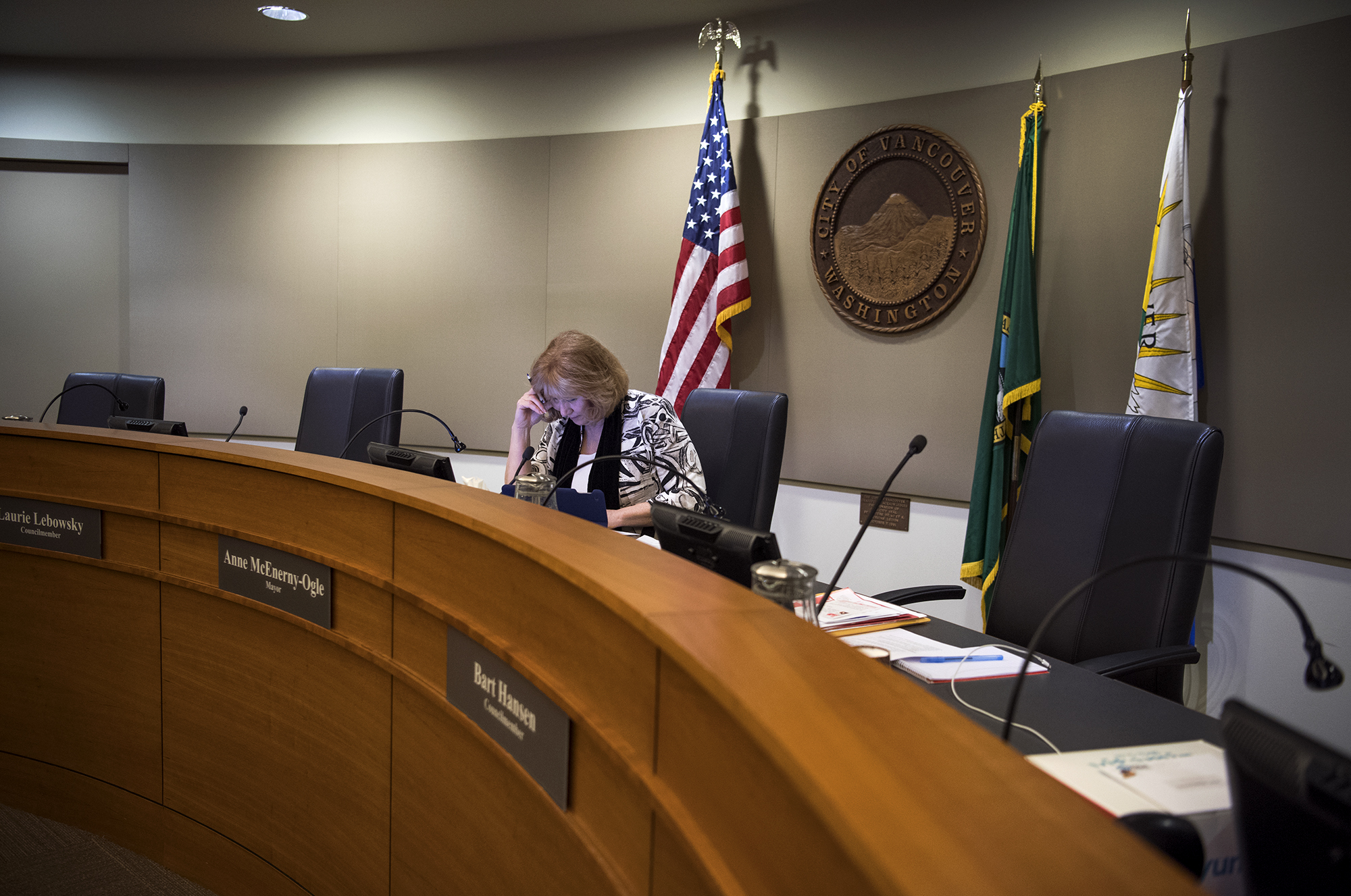 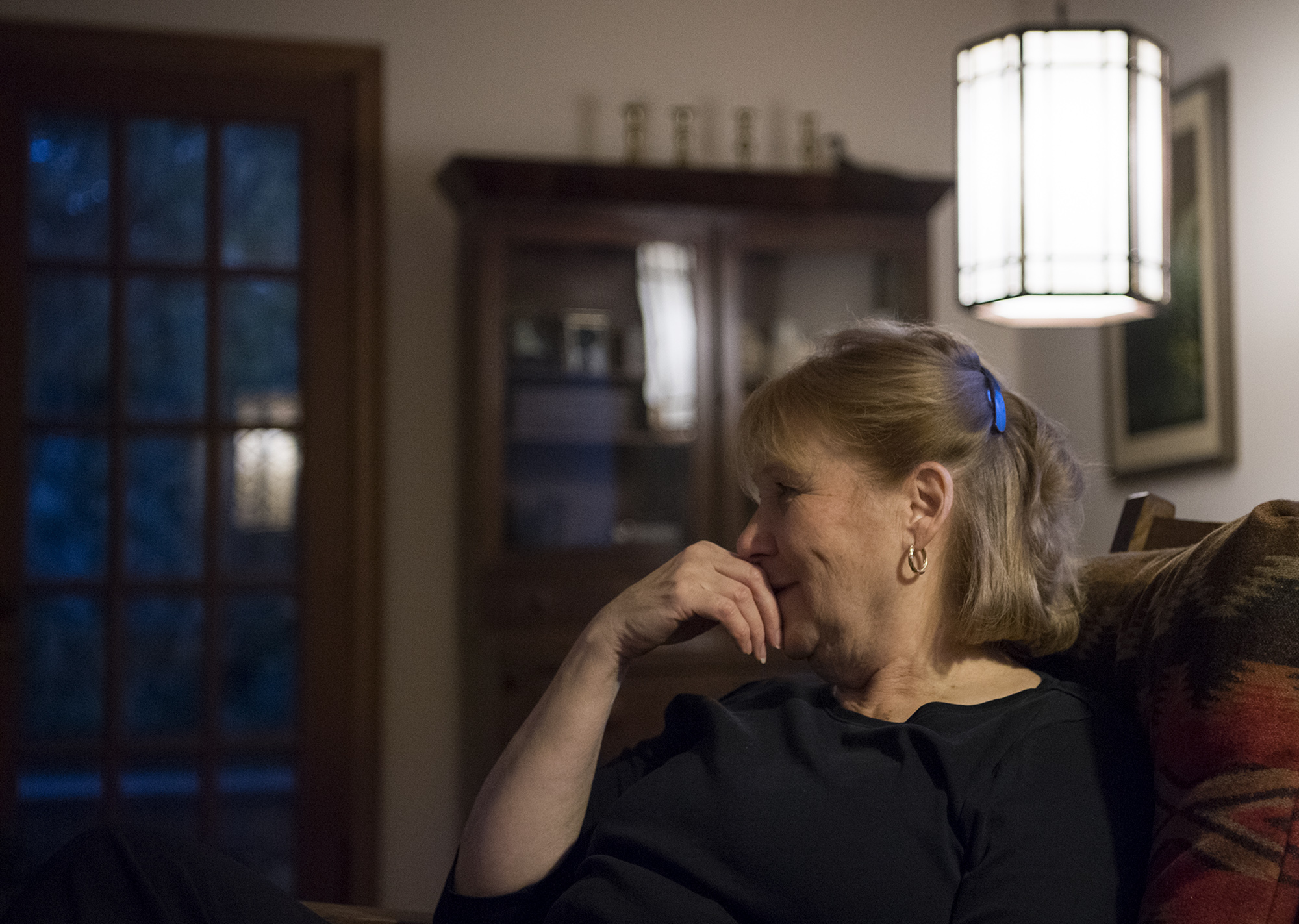 Ask anyone to describe McEnerny-Ogle and the same themes emerge. She’s involved. She’s a champion for anyone and everyone. She’s open-minded and truly cares about the community. She tries to do it all.

“One of her best qualities is her ability to truly listen to people; this is an uncommon characteristic, especially in the political world. I’ve never heard her consider a topic from a partisan stand, and because of that, she creates good governance and policy.
She has a true love for her community, and it shows. I certainly hope to engage Anne much more in the next three years of her first term and I have a true admiration for the job she does, and the thoughtful leadership style she displays every day.” Washougal Mayor  Molly Coston

“Hearing her in action, watching her with the young kids, it was obvious that her impact in the community far exceeds the typical paper pushing that plagues most politicians’ busy schedules,” he said.

She’s the kind of mayor who spends that extra minute chatting with the janitor on her way out the door. Leaving a recent talk at Fort Vancouver High School, she backtracked to pick up a dime she spotted on the ground and placed it in the hand of a passing student without skipping a beat.

She’s a mayor who shines in the little moments.

When it comes to baking cupcakes, McEnerny-Ogle and her husband Terry have it down to a science, trying to do a little when they can’t do a lot, she said.

And they always make the cupcakes together.

Otherwise, her husband said, “she’d do it all herself.”

by Patty Hastings
Next: Life