PLEASANT VALLEY — The very best part of the show, Hannah Grant reported with a milewide smile, was all the screaming. It was the kind of reaction you only get from a crowd that’s really, truly blown away.

“That was the awesomest thing,” she said.

The screaming came from parents, siblings, friends and onlookers in the Prairie High School gym, where seventh-grader Hannah and the rest of the Pleasant Valley Unicycle Team showed off their defiance of basic physics. Or so it seemed, anyway; we’re all used to balancing and moving around on pairs of props, be they our own two feet or a bicycle’s two wheels, but it’s the rare athlete who has mastered balancing, rolling and even bouncing up and down on one squishy tire.

“I enjoy that not many people can do it,” said eighth-grader Chase Phillips, a seasoned unicycle performer. “The crowd always goes crazy.”

“It’s so cool. It’s not like basketball. I fell in love with it because it’s not a normal sport,” said seventh-grader Sheltin Krcek.

“Two wheels is supposed to be easier,” said second-grader Emma Russell, “but not for me.”

Unicycling is such a specialized skill, even the coaches and assistants who shepherd Pleasant Valley Middle and Primary schools’ newbies into a well-drilled, scream-worthy performance team never actually climb aboard to demonstrate how it’s done. Is this a classic example of those who cannot do it, teach?

Almost. Outgoing coach Paul White brings a bundle of energy and good humor to the mission — “I just get so fired up!” he announced during one practice session, and the kids and their parents clearly feel his cheerful heat — but confessed that it’s been years since he actually mounted a unicycle. “It’s been a while. My left knee, I’m in line for a knee replacement, and I don’t take any chances with that,” he said.

Taking over for White next fall, and already on the scene now as Pleasant Valley P.E. teacher and after-school unicycle assistant, is Josh McArthur — but McArthur confessed that he’s so busy helping kids mount and steer and jump and weave, he’s never tried it himself.

“I haven’t had the time. I’m managing a ton of kids on machines that could go wrong. But that’s not a good excuse,” McArthur admitted.

White knew early on that he wanted to teach P.E. and coach sports. When he attended the University of Oregon in Eugene in the 1970s, he said, groovy circus skills like juggling and unicycling were part of the P.E. curriculum. “I had fantastic teachers and I just loved the process. I started riding a little bit,” White said.

Years later, when White was the Pleasant Valley Primary School P.E. teacher and had a small budget to spend, he started acquiring the occasional used unicycle; then he wound up snagging another school’s entire retiring unicycle fleet for a song. “We got 35 unicycles and four racks, helmets, elbow pads, knees pads, wrist guards. That really kicked us off,” he said.

“We started doing demonstrations here and there. Over the last 15 years, we’ve been doing our halftime show” at local school games as well as rolling through everything from the Hazel Dell Parade of Bands to Portland morning TV chat shows, a Portland arts center (where White tried to avoid exposing his team to the Naked Bike Ride, which was getting ready to roll, too) and even halftimes at the Moda Center and the Tacoma Dome.

“It started exploding, with everybody hearing about us, like you and KGW,” White told The Columbian. “I am surprised at how big it’s gotten.”

White retired as P.E. teacher at Pleasant Valley a few years ago, but he stayed on as after-school unicycling coach. But this is definitely his last season, he said; he’s getting ready to move to Long Beach with his wife, Kristin, who assists the team when she’s not busy being principal of Cascade Middle School.

Here they come: An army of kids perched atop unlikely contraptions, rolling forward and splitting into concentric, spinning rings; twirling in pairs and then linking into long, turning lines; driving up ramps and flying over the flattened body of assistant coach McArthur (who hasn’t suffered a spinal injury yet); climbing onto super-tall giraffes and one super-dooper tall triple-decker unicycle. Topping it all off, one teeny-tiny girl grabs a horizontal pole in between two giraffe unicyclists and executes a gymnastic full-body flip.

That’s the show: an exercise in controlling chaos for 5½ minutes, sharp. Check out our wide-angle video of the Jan. 22 performance at Prairie to see how it works. Feel free to scream in delight too.

“It’s a partnership with the kids,” said White. “It starts with basic skills and patterns. It’s all trial and error, and I get a lot of feedback from the kids. They have great ideas and suggestions, and it all blends together.” As certain kids master certain skills, he added, he showcases those strengths — like the ones who can mount those super-tall giraffes and triple-deckers. They start practicing that tricky move with the help of a ladder; without one, sixth-grader Jake Drogos tried but fell off his triple-decker while warming up for the show, and came up red-faced.

But during the performance, Jake executed his anti-gravity move flawlessly — and the delighted crowd shrieked its collective head off. 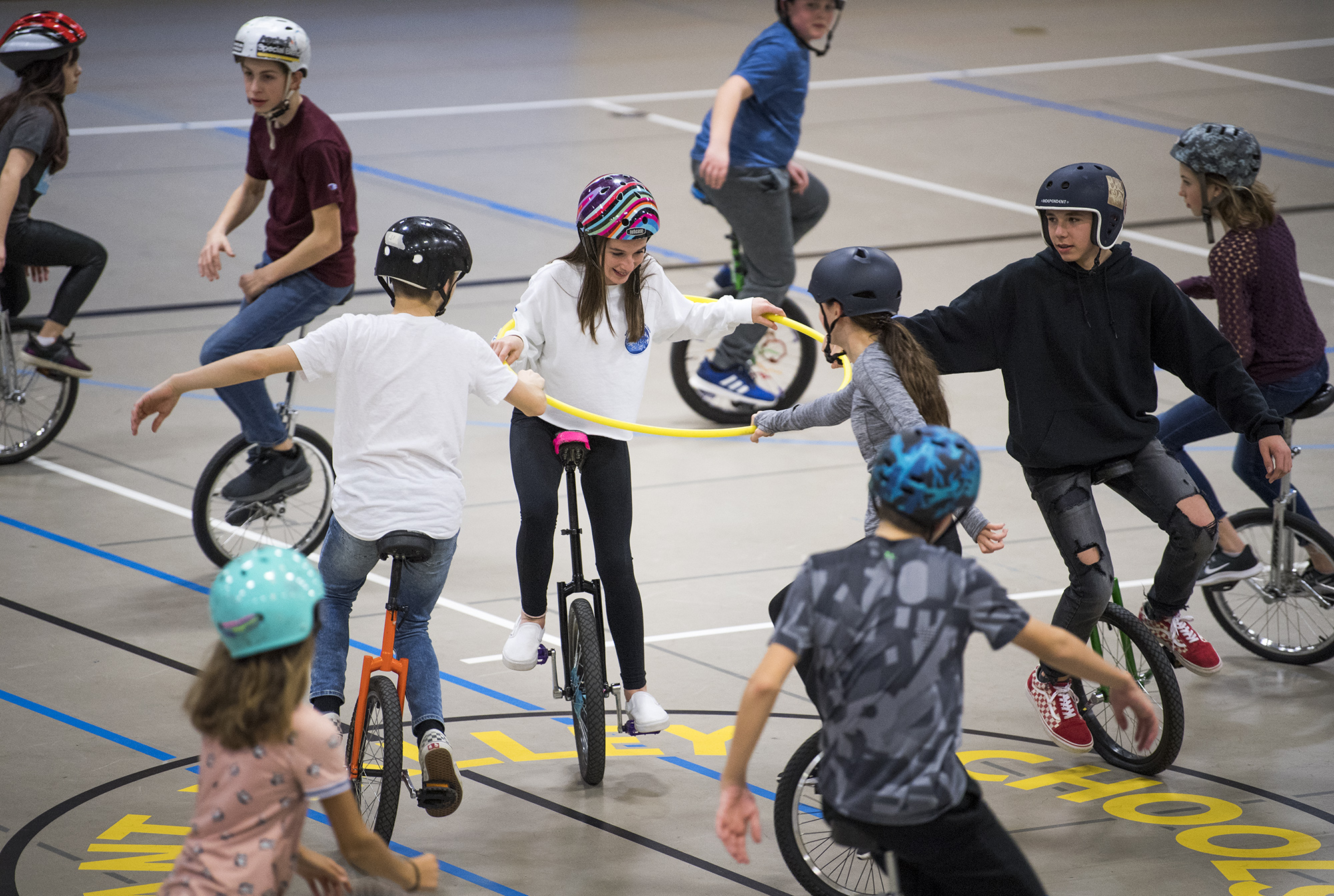 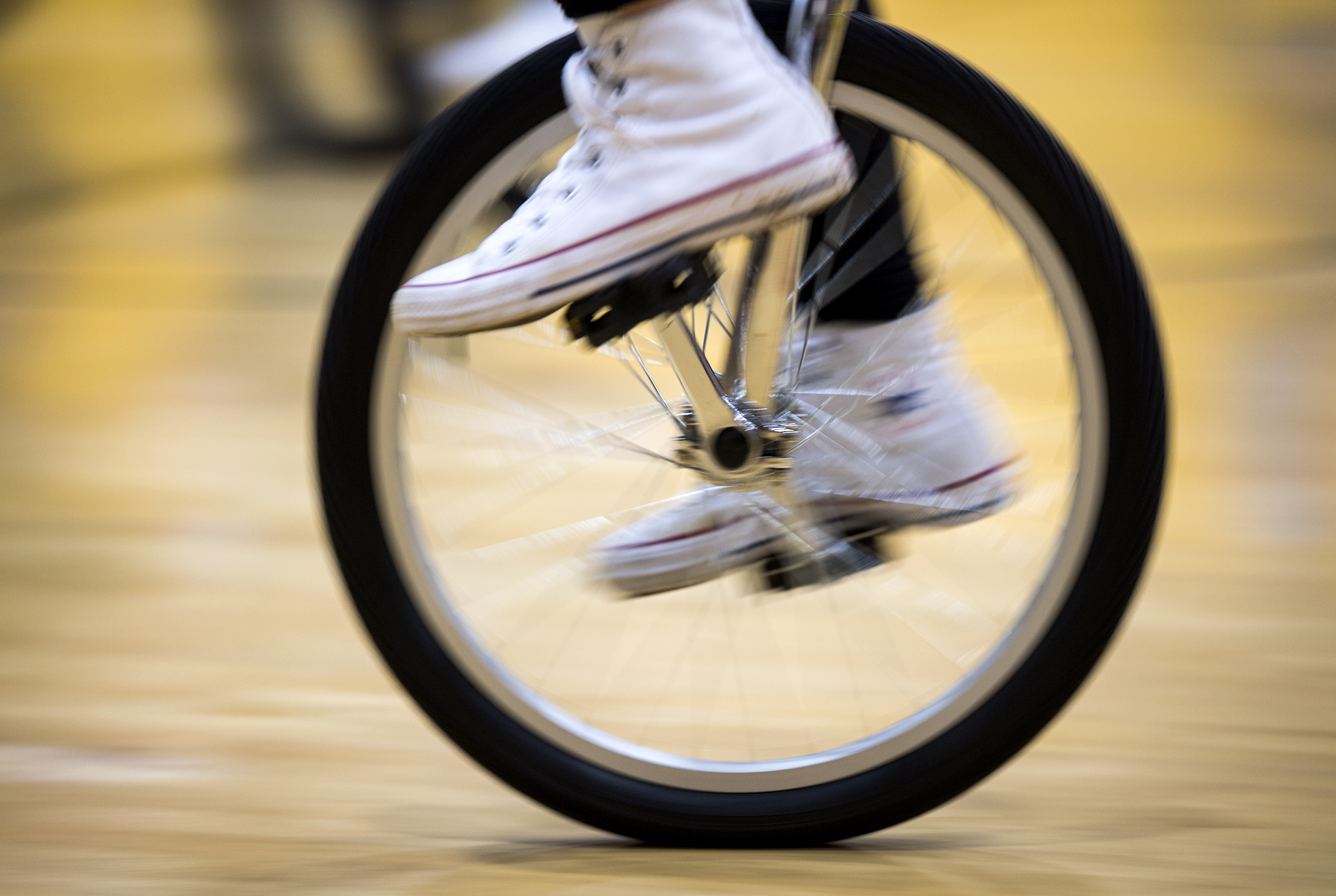 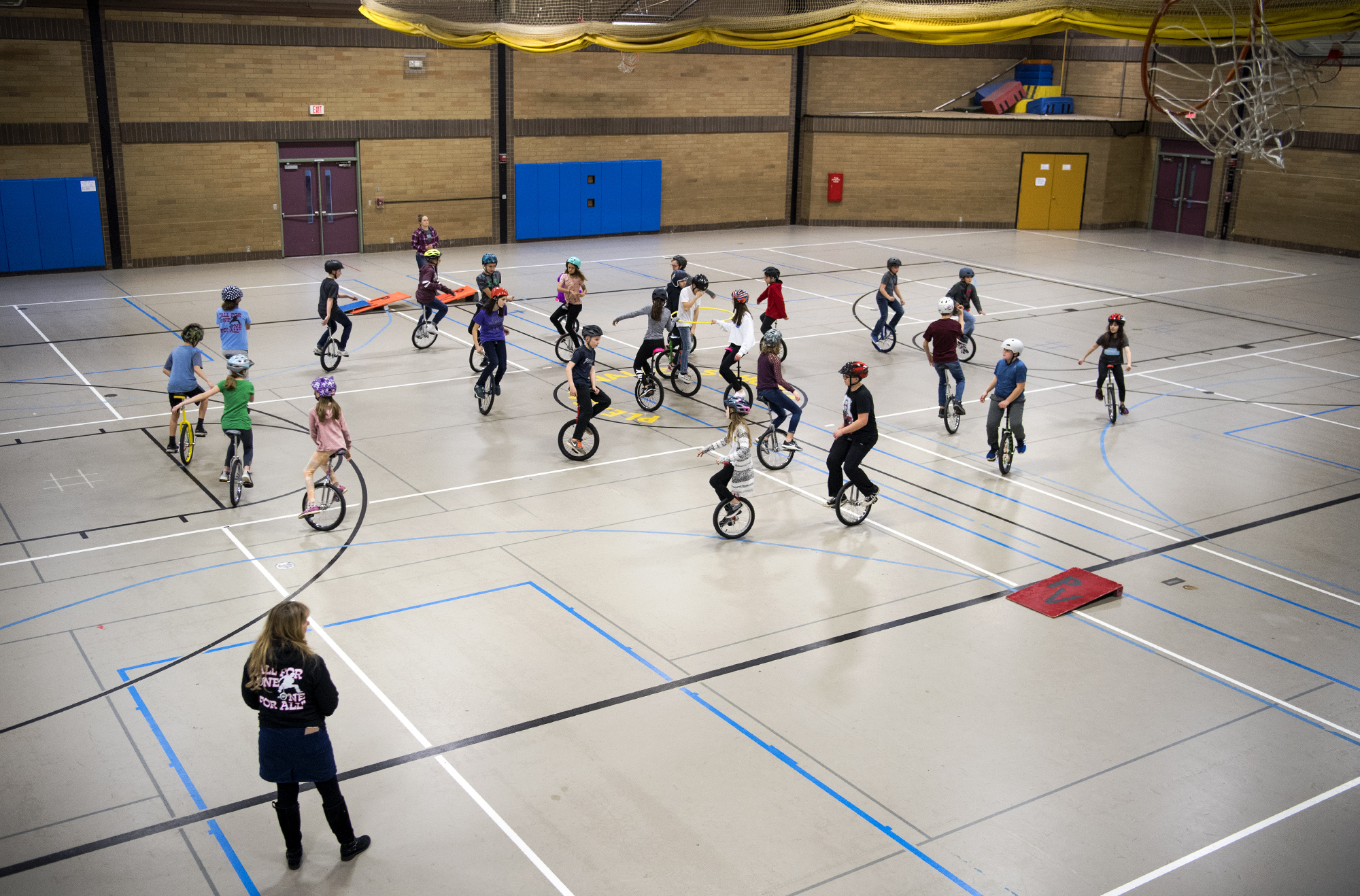 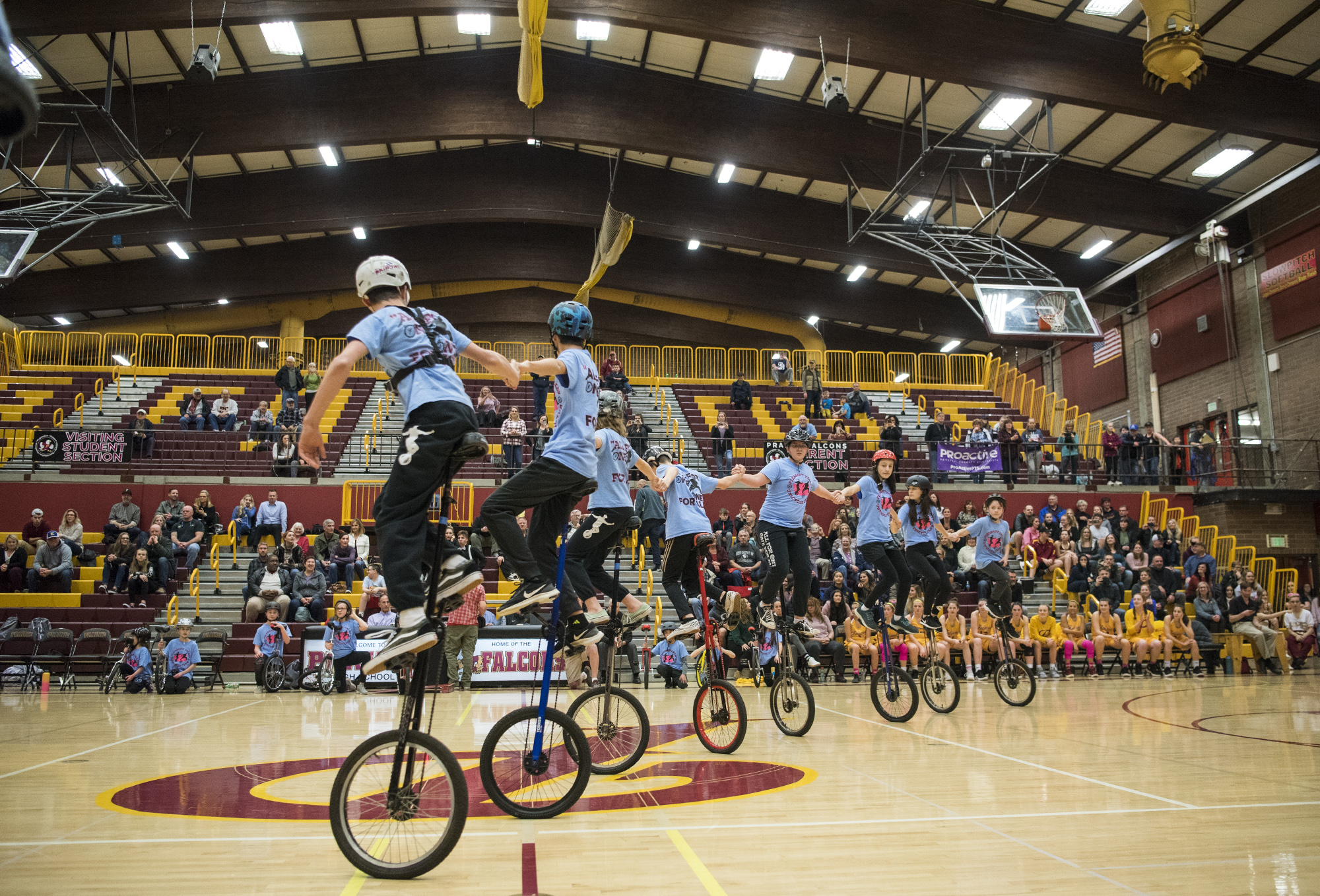 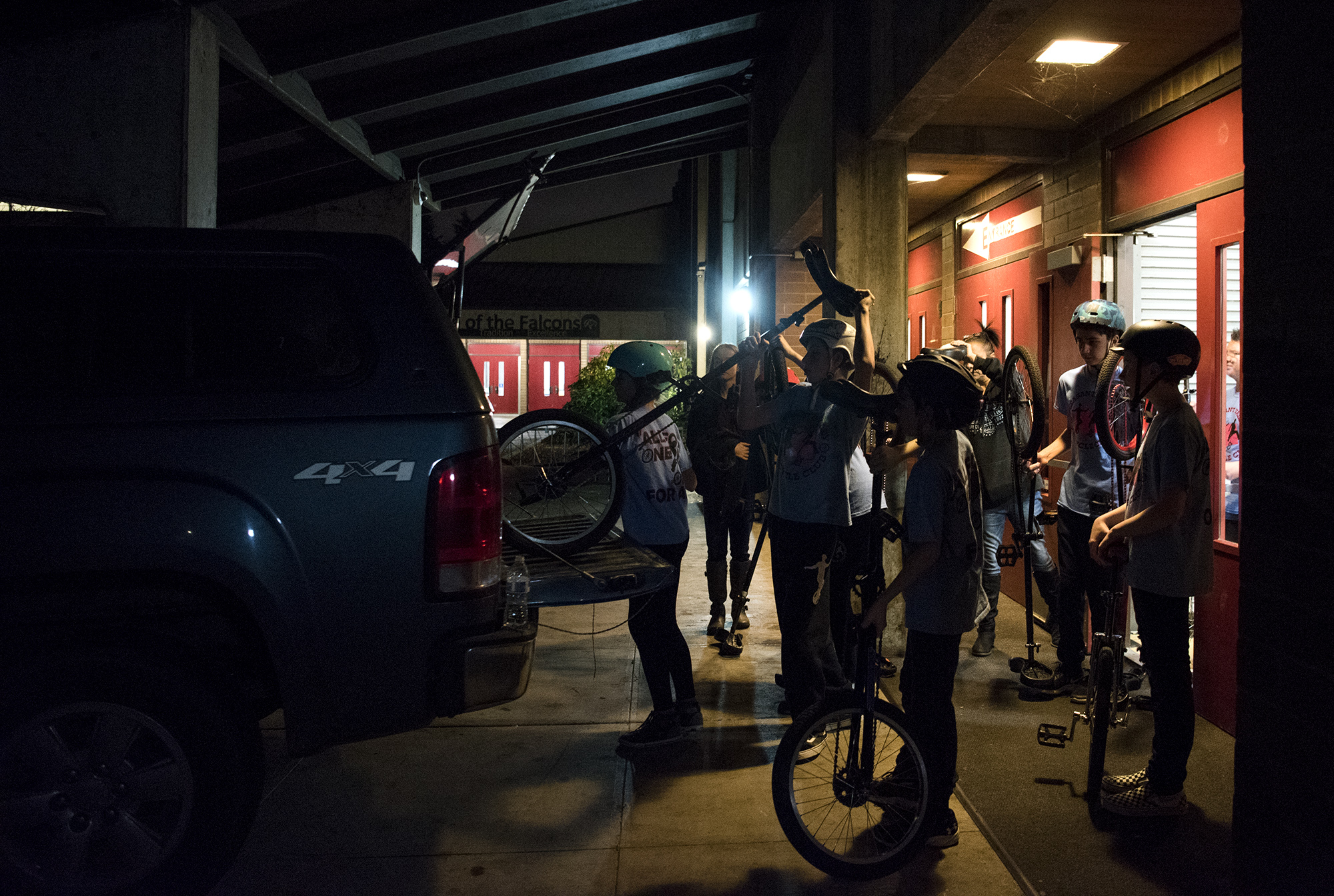 It’s no exaggeration to say unicycling is a lifestyle for many of these kids. You’ll see them riding up and down neighborhood streets and pedestrian paths. Hannah Grant rolls along while walking her dog. She loves it when people’s jaws drop and they holler such helpful comments as: “Hey, you’re missing a wheel!”

“It’s her passion,” said mom Meredith Gannon — and then her sixth-grade daughter, Piper, rolled on up and agreed.

“It’s hard to learn, but then it gets easier and easier,” Piper said. While a few said they mastered basic balancing after just a couple of hours’ trying, White usually warns newbies to expect about 10 hours of struggle just to stop falling down.

“I love to see these kids working on a skill that a lot of people cannot do,” he said. “It takes a lot of perseverance and a lot of failure to succeed.”

Best of all, White said, is that the team is an example of all-ages cooperation. “I’m extremely happy that we’ve got sixth-, seventh- and eighth-graders who are willing to give back to second- and third-graders who are just learning,” he said. “Everybody works together to make it work.”

There are natural-born athletes and performers on the team, like eighth-grader Chase Phillips, who said he had the knack “instantly.” As far as performance goes, he said, “I don’t get nervous. I do better under pressure.”

And then there are kids like Hannah, who said she never would call herself a jock. She’s dealt with painful scoliosis for much of her life and wore a back brace for three years; more recently she had left-leg tibia surgery that set her back. After that she had to relearn a lot of basic skills, she said.

None of which stopped her from unicycling — down the street, on the path, with her dog, on the team. “I’m very stubborn,” Hannah said. “I didn’t want to quit.”

The Pleasant Valley Unicycle Team will perform in the halftime show at the Chiles Center, University of Portland, when the men’s basketball Pilots take on Brigham Young. The game begins at 8 p.m. Feb. 7 at 5000 N. Willamette Blvd., Portland. Tickets are $5 to $22.

by Katy Sword
Next: Politics

by Katie Gillespie and Katy Sword