Mom with breast cancer makes most of time

Erin Maher pulls her daughter close and nuzzles her face into the crook of the baby’s neck. She alternates between blowing raspberries on 9-month-old Illianna’s delicate skin and peppering her daughter with kisses.

Her 3-year-old, Liam, flutters around the small living room. He tickles his baby sister’s belly, then dances across the room to his container of Goldfish crackers.

Framed photos of Maher, her husband, Brandon, and the kids fill an entire wall of the Vancouver apartment. Artwork made with Liam’s and Illianna’s handprints and footprints hangs in the corner.

Illianna smiles and giggles with every touch of her mother’s lips. But when Maher flips the baby upside down, lifting Illianna’s small body above her head and blankets her forehead with kisses, Illianna erupts into a fit of giggles.

Maher is a cancer mom. Illianna is her chemo baby.

Maher learned she had breast cancer when she was 14 weeks pregnant.
“There’s a very, very likely chance I’m not going to live until my daughter’s third birthday,” Maher said. “It’s the reality of it.”

But that doesn’t mean Maher, 33, has resigned to let cancer win or is wallowing in pity over her uncertain future.

“Quitting isn’t an option,” she said. “I plan to be around for a long time.”

Maher first noticed the small lump in her right breast while breast-feeding her son in May 2016. She made an appointment with her doctor, who assured her it was just a clogged duct. When the lump didn’t go away,

Maher went back to her doctor. Again, she was told it was nothing to worry about. A clogged duct, Maher argued, would resolve over time with at-home treatment methods. This lump wasn’t going away. It was getting bigger.

But time and time again, Maher’s doctor told her she was too young to have cancer. Plus, the doctor said, she was still breast-feeding and then became pregnant, both of which made it less likely she would develop cancer.

Frustrated, Maher found a new doctor. At the first appointment, her doctor acknowledged Maher’s concern and immediately sent her for a diagnostic ultrasound. A few days later, Maher learned she did have breast cancer.

Thank you, she said, because someone finally listened.

“I knew it was cancer but nobody believed me,” she said. 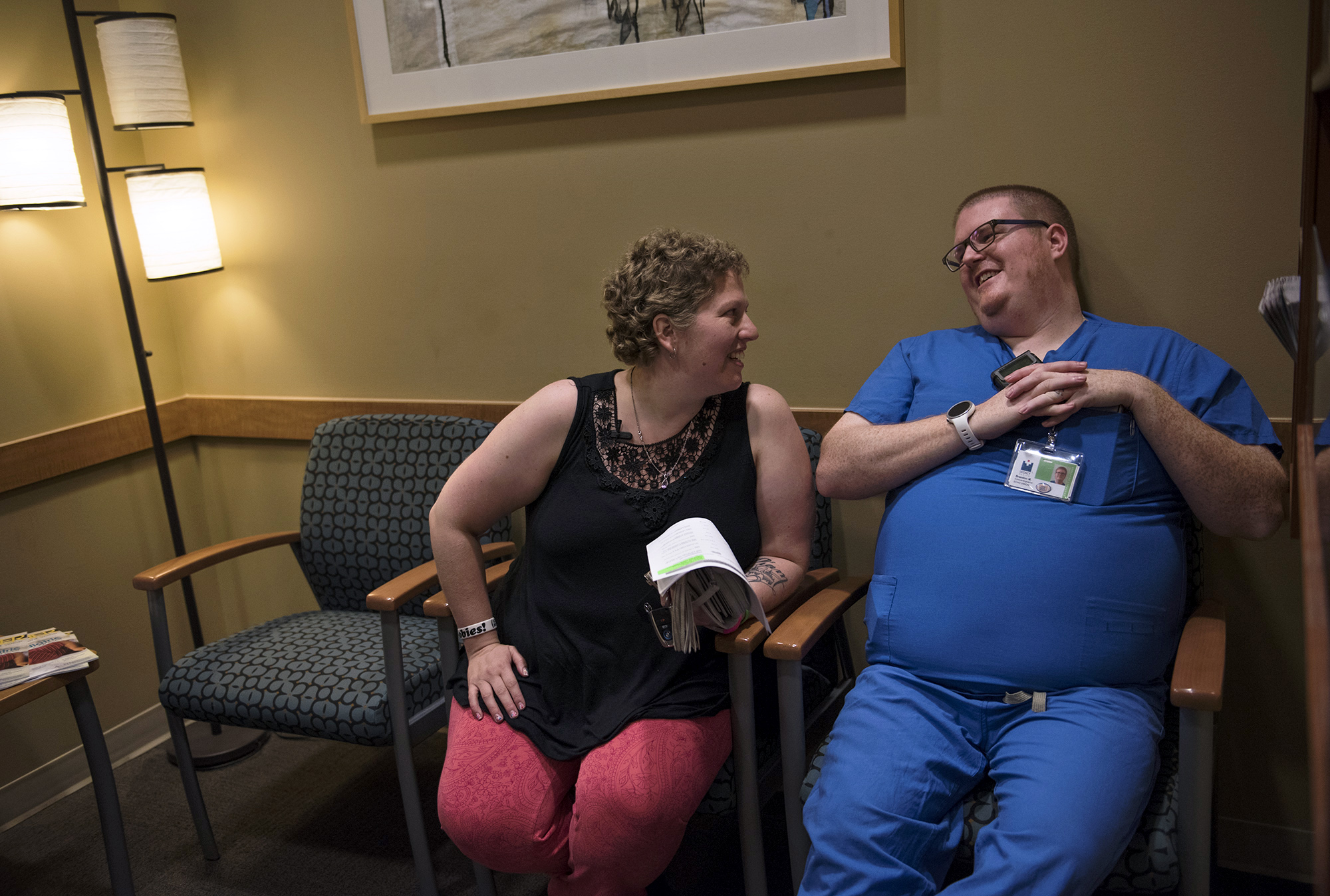 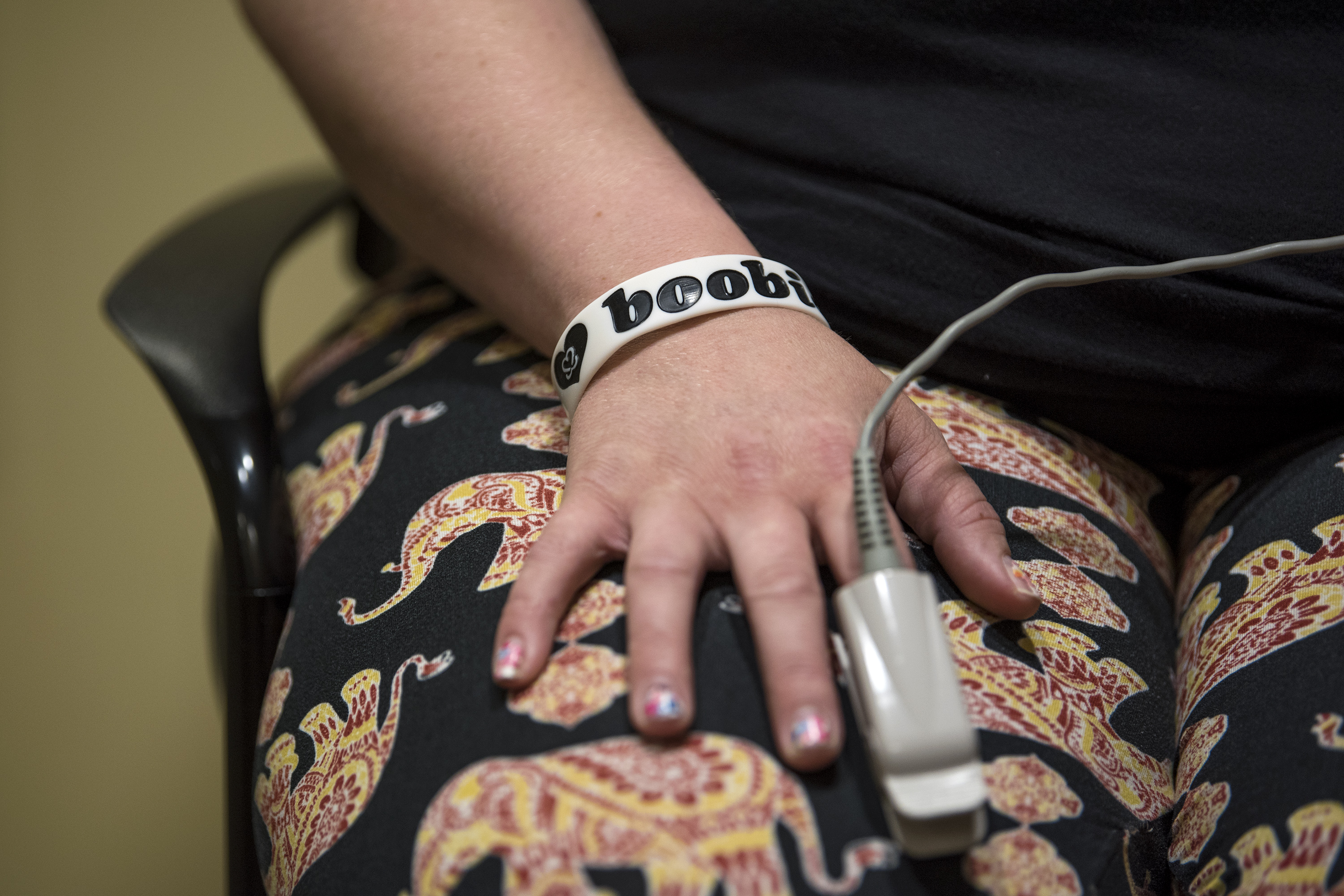 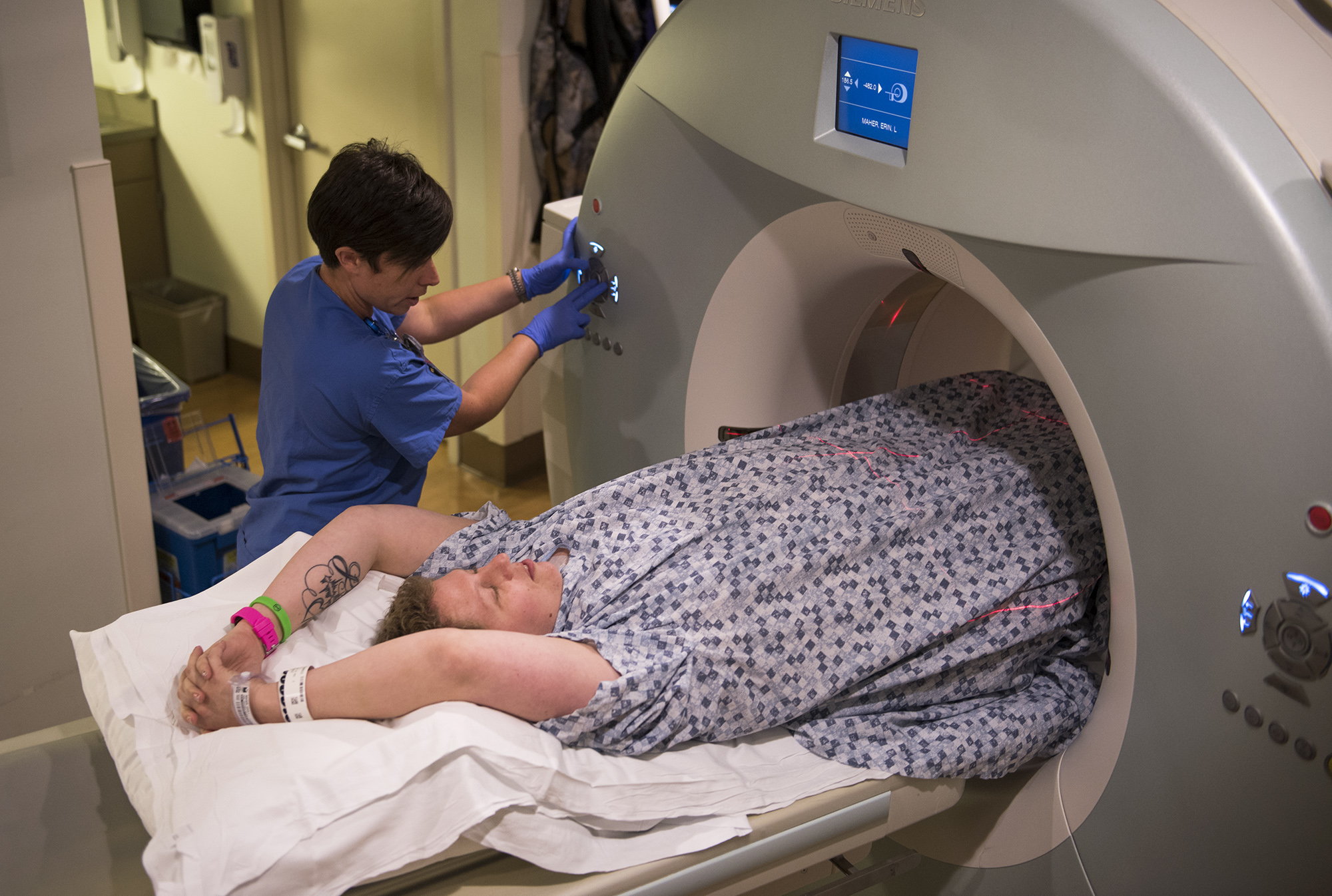 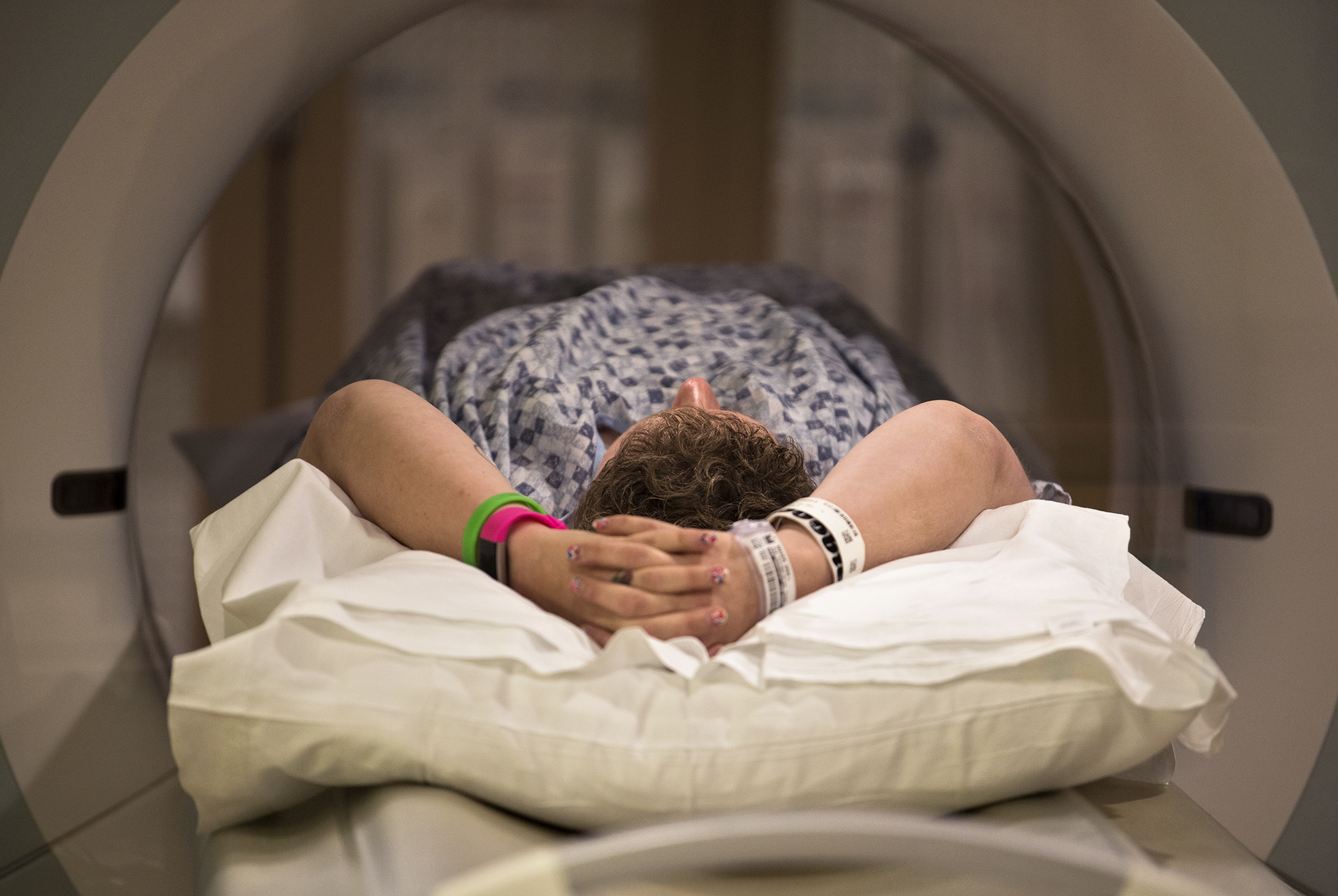 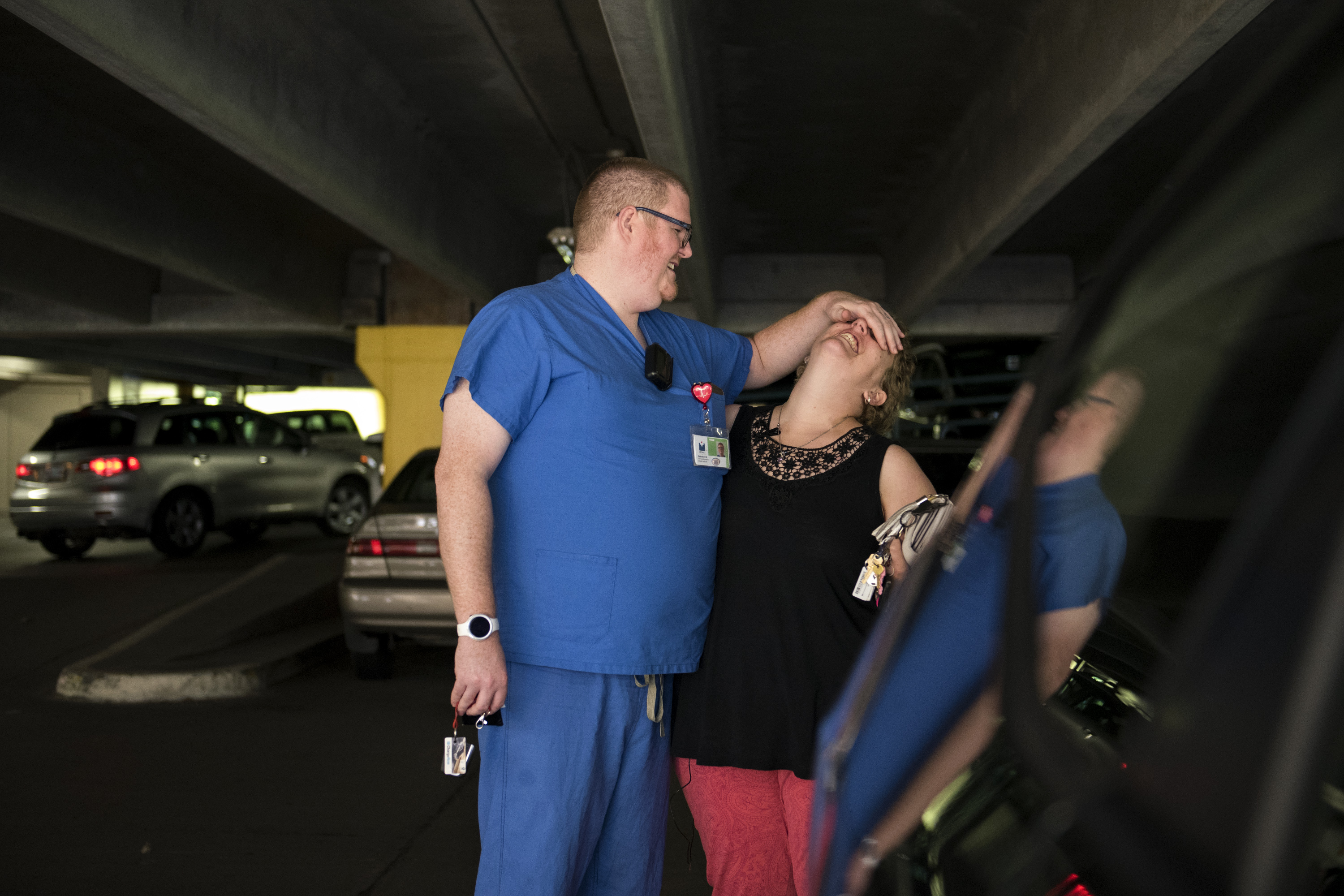 Initially, Maher and her husband assumed they would lose the baby if she underwent chemotherapy that could save her own life.

While doctors said Maher could receive chemotherapy while pregnant, they didn’t know exactly what they were dealing with. Maher needed a PET scan to reveal the stage of her cancer, but that couldn’t be done while she was pregnant. Doctors estimated the cancer was Stage 2, which means the cancer growth is confined to the breast or nearby lymph nodes.

Just days after receiving the diagnosis, Maher had surgery to place a port and began chemotherapy. She underwent five rounds before doctors cut the treatment short because her cancer wasn’t responding well.

“The tumor was actually bigger than when I started,” she said.

Maher’s type of cancer carries a high likelihood of not responding to traditional therapies. In triple-negative cancer, the three most common types of receptors known to fuel most breast cancer growth — estrogen, progesterone and HER-2 (human epidermal growth factor 2) — are not present in the tumor. The receptors are typically targeted in cancer therapies. Without those receptors, the therapies aren’t as effective.

After halting the chemotherapy, Maher underwent a lumpectomy on Dec. 13. Surgeons removed 6 centimeters of breast tissue and several lymph nodes, which revealed the cancer had spread. An ultrasound showed that her liver and kidneys were clear of cancer, but the PET scan later showed the cancer was more advanced than initially suspected. Instead of Stage 2,

“It spread as far as it could without spreading into my brain, my bones or my liver and going metastatic,” Maher said.

“I bawled when they put her in my arms,” Maher said. “That was the first time in my life I truly felt pure, unadulterated joy. Nothing else mattered. I didn’t think about cancer. I didn’t worry about her growing up without a mom. All I felt was an overwhelming sense of peace knowing we were going to be OK.”

Liam got his haircut like mommy today. You’re so adorable, and you make me so happy.

Illianna had the biggest smile when daddy got home. Love you, my sweet girl.

“I just don’t see anybody else doing that for them,” Maher said. 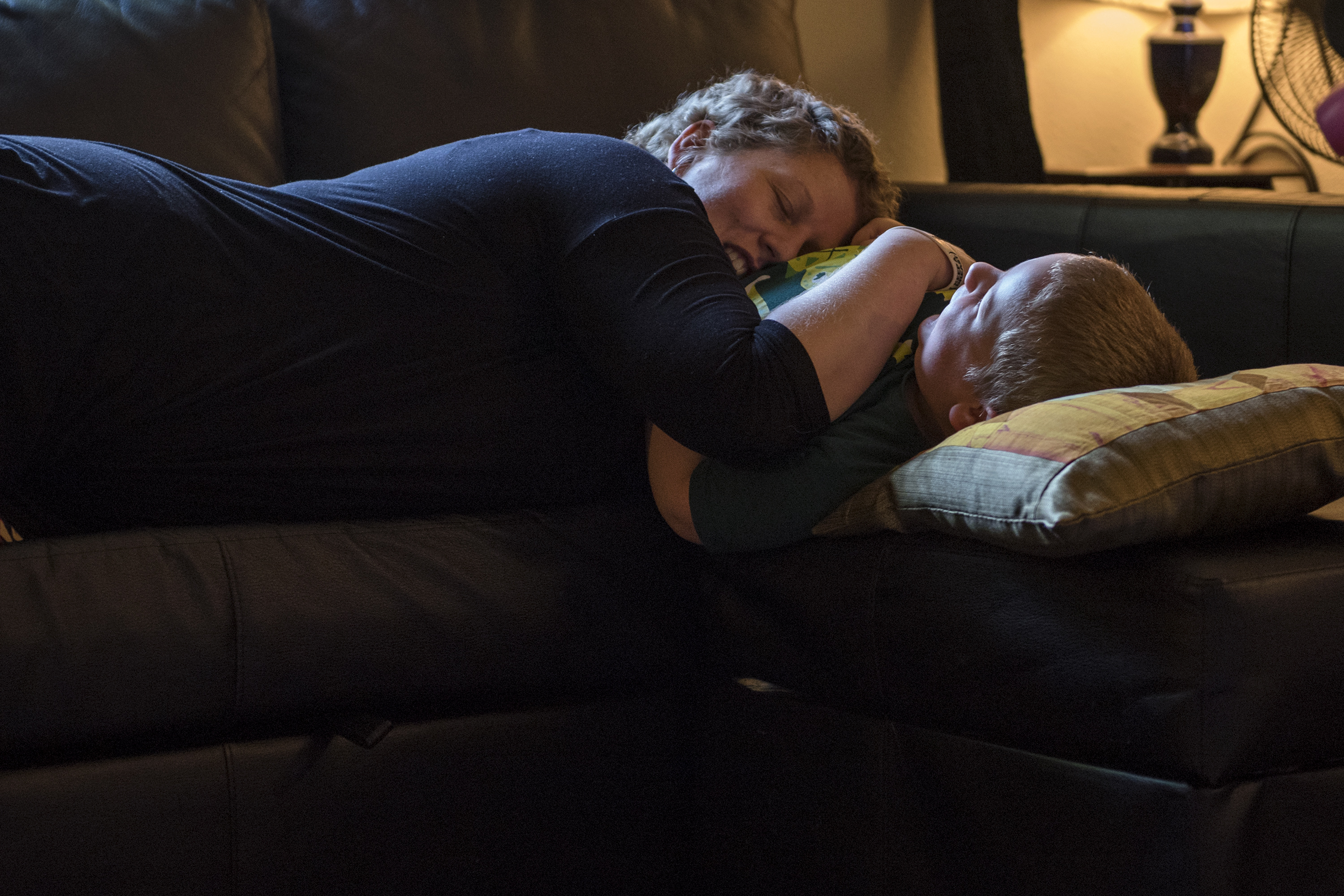 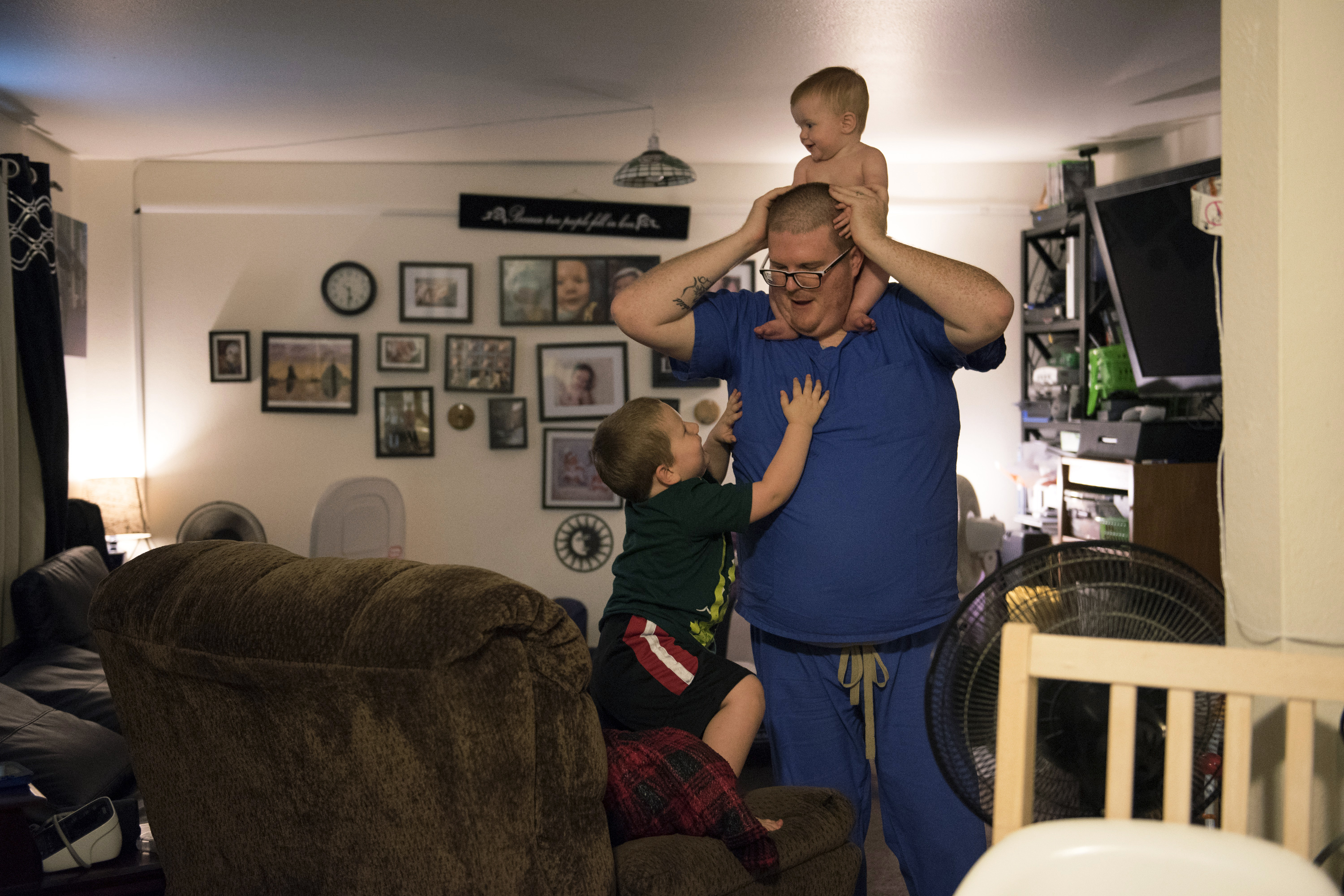 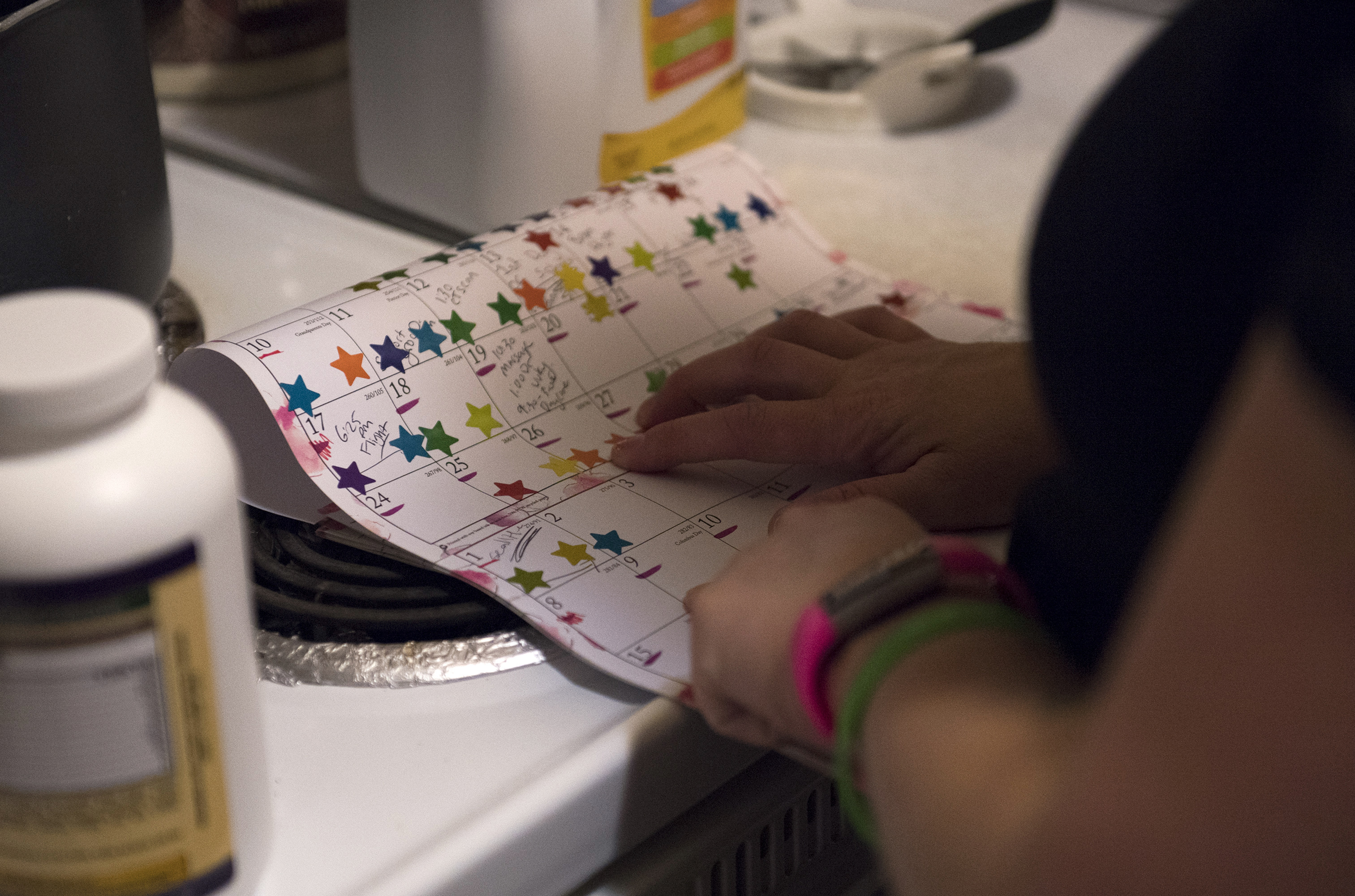 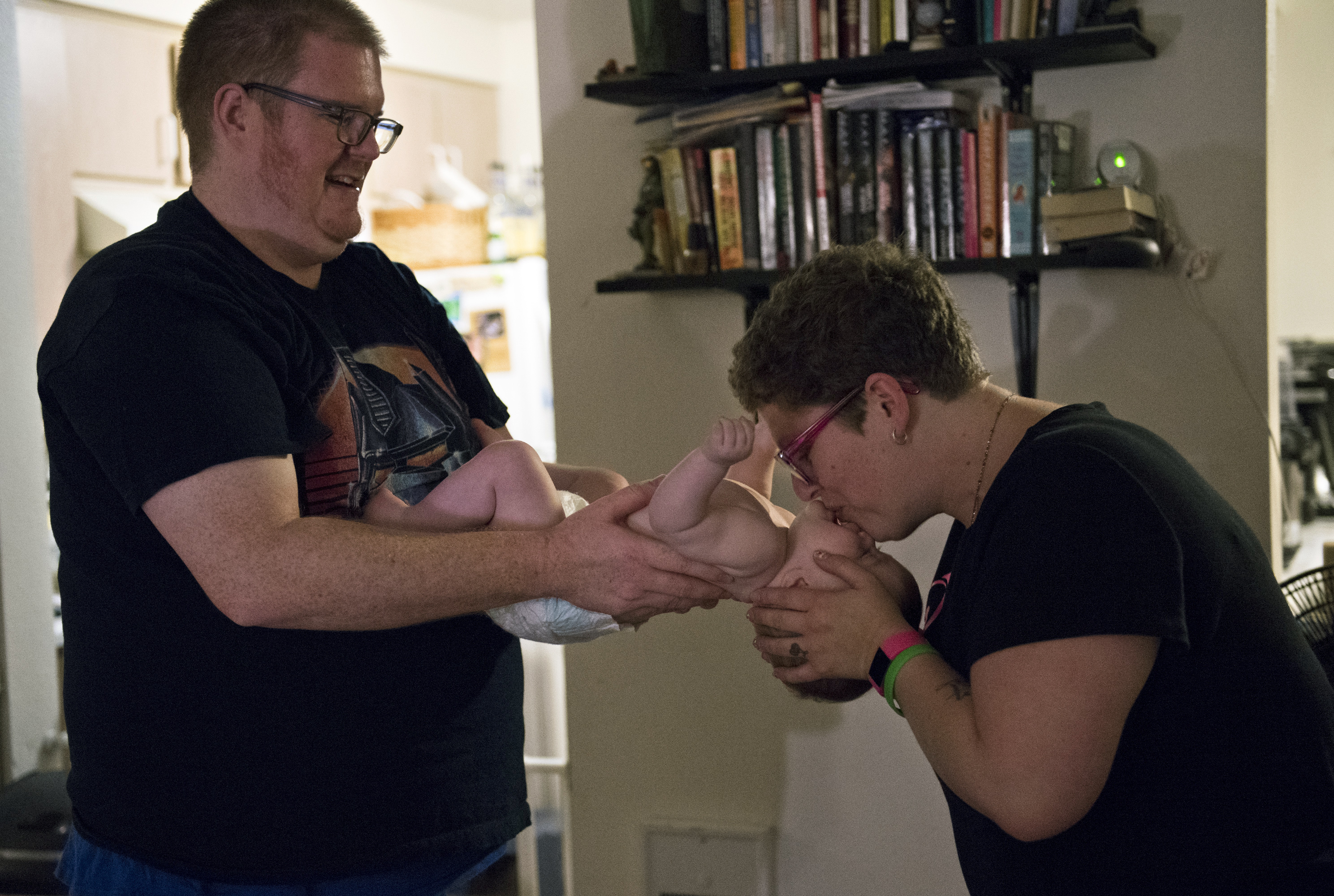 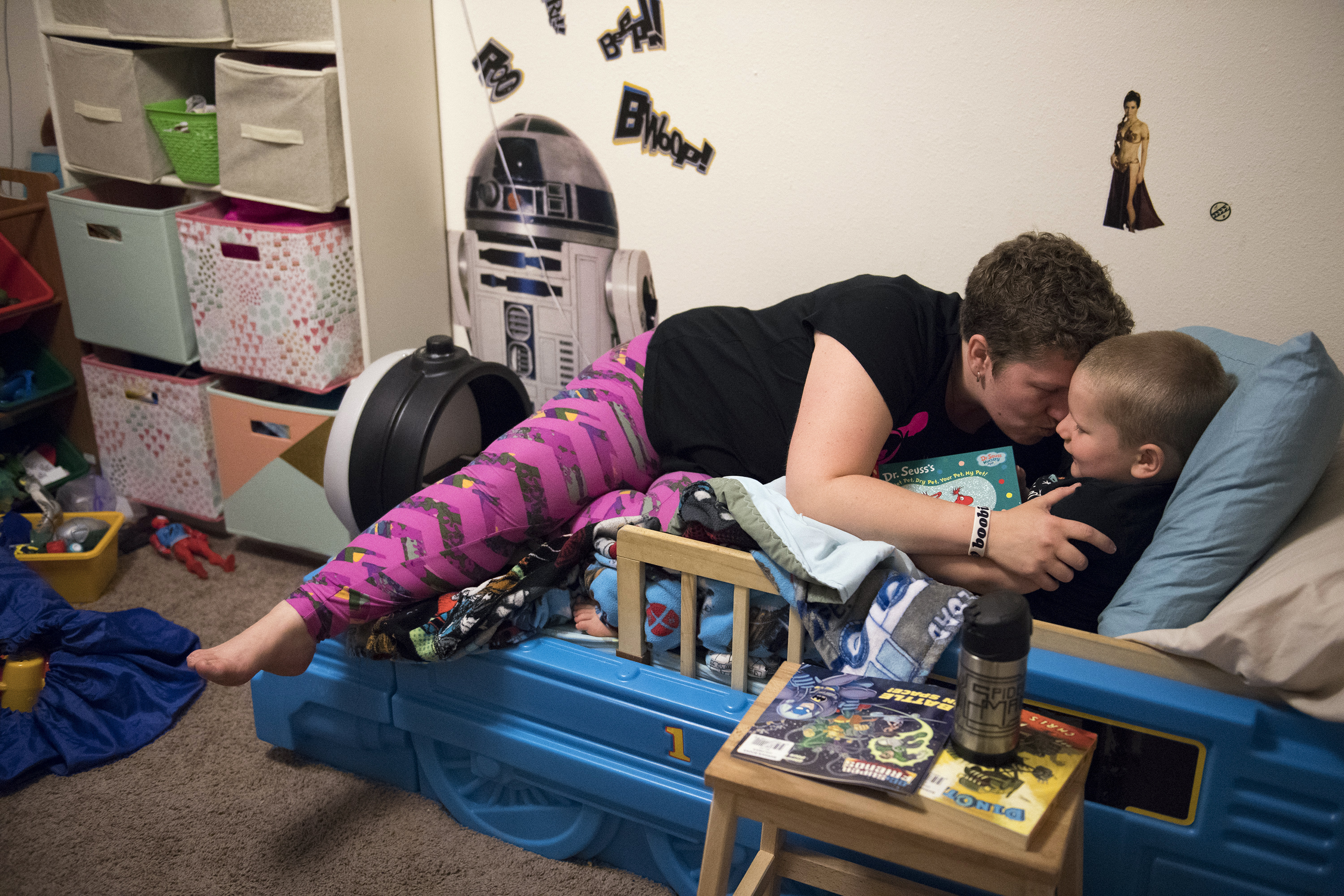 Maher approaches her diagnosis and her prognosis matter-of-factly. Breast cancer may kill her, and she has accepted it. She smiles while talking about the things she’s already overcome — the surgeries, the chemotherapies, the radiation. She shrugs off the painful side effects of the drugs and the uncertainty.

“But I think (the cancer diagnosis) brought more of that out in her,” he added.

But, with the cancer diagnosis, it took time for her to find that peace.

“There were lots of nights where my son would be sleeping and I would just look at him and cry,” she said. “It was really tough for a really long time.”

Once she made the decision to accept the circumstances of her disease, she started to move on with her life.

She takes Liam to preschool and volunteers in his classroom. She shares her story at fundraising events for cancer nonprofits. And, after losing her job, she used her artistic skills to start her own business, Warrior Baby Creations, designing mostly cancer-related decals for clothing and stickers.

She refuses to let cancer get her down.

“There’s no point wasting the time I have with my family worrying about not having them or not being around for them,” Maher said. “I need to enjoy what I have now.”

“I live every day to the happiest I can, because you honestly don’t know if it’s your last.”

by Patty Hastings
Next: Education