It’s the first day of school, and at Fruit Valley Community Learning Center, Principal Matthew Fechter is sitting with a second-grade student.

She’s having a hard day and refused to leave her desk to join her classmates on the carpet for storytime. So her teacher called Mr. Fechter.

Fechter leans over and whispers something to the crying girl. She nods, still sniffling, and joins her classmates on the carpet. Fechter sits with her for a time before handing her a folded note.

Good things do happen in Fruit Valley, a community that’s physically and financially on the edge. Isolated by railroad tracks and industry that towers over smaller, older homes, the median household income is only about $32,000, compared with about $61,000 countywide, according to Census data.

But it’s also a community on the rise, peppered with development and increasing home values. Families are moving to the neighborhood, and enrollment at the elementary school has grown by 17 percent in the last five years — outpacing the Vancouver district’s overall 4.5 percent enrollment increase.

At its heart lies the Fruit Valley elementary, a historically under-performing school of about 275 students. It’s there that Fechter, a second-year principal, and a team of administrators, teachers and volunteers are working to make good things happen for children and families.

Fechter’s Mondays start with a meeting of a team of counselors, school psychologists and language specialists. Together, they run down a list of students who need extra academic or emotional support.

“She’s a good kid,” Fechter said of one child who was acting out in class. “It’s just figuring out how do we help her?”

Schools are increasingly becoming families’ entry point into a variety of social services, especially at a school like Fruit Valley, where children are from poor families, learning English or need special education support.

“We’re fortunate we have the resources on site to internally respond,” Fechter said.

Fechter, 38, started his career in education about 12 years ago as a counselor. He liked school, Fechter said, but he was always a “middle kid,” the kind who would finish his work but then start talking and become distracted. Growing up north of Spokane, there were bad experiences with teachers — the ones who didn’t know how to respond to him or help him — and good experiences — the ones who helped keep him on track, or supported him.

It was those teachers, the ones who kept him from being overlooked, that drove him to a career in education.

“Even as a kid, I picked up on that they were advocating for me,” he said.

In his career as a counselor and later an administrator, Fechter has worked to pay forward that support, saying Fruit Valley’s high-needs population is “where my heart is.”

“I think Fruit Valley is an often overlooked area of Vancouver,” he said. “It’s always called to me.”

After these Monday meetings, the Fruit Valley core group spiderwebs out, visiting classrooms, setting up mobile offices in the library or cafeteria, assisting and observing in classrooms. In some cases, Fechter will step into classrooms to work with students — but, like those teachers who influenced him, he’s there to support rather than punish.

“I think that’s where the role of principal has changed,” he said. “I think the students at my school know it’s not the traditional, ‘Uh oh, the principal’s coming in, you’re in trouble.’ ”

On a recent Monday, he sat with a squirming student in class, urging him to stay focused on his assignment. He did wall sits and deep breathing with another boy who wouldn’t do his work. He crawled under playground equipment to urge a girl, angry she didn’t have a turn on the swings, to return to class.

And in turn, students respond. Some of the youngest grab his hand on the way to the cafeteria. They wave and greet him when he enters classrooms. They slap his hand with a high-five as they enter school for the day.

Martha Garrison’s granddaughter, Keira Klein, is a student at the school. After ongoing challenges at home, the fifth-grader missed nearly a year of classes. She didn’t enjoy school. This year, however, after intervention from teachers and literacy coaches, Keira’s grades are up and she’s eager to go to school each day, Garrison said.

“She’s enthusiastic this year and bouncing out of bed getting ready to go to school,” she said.

“He’s just very involved, and I think that’s great,” she said. “I think every school should have a Mr. Fechter.”

The impact of Fruit Valley elementary extends beyond its walls, and so too does Fechter’s presence in the community.

He doesn’t live in the neighborhood, but attends neighborhood association meetings, has spoken to the Port of Vancouver and works with neighborhood organizations and churches to build partnerships for the school.

Fechter calls Fruit Valley “a working-class neighborhood,” filled with diverse families, some who have lived there for generations, others who are just starting out.

“Everybody embraces each other because we are in a sense land-locked between the railroad tracks and the lake and the industrial areas,” Fechter said. “We have to rely on each other down here.” 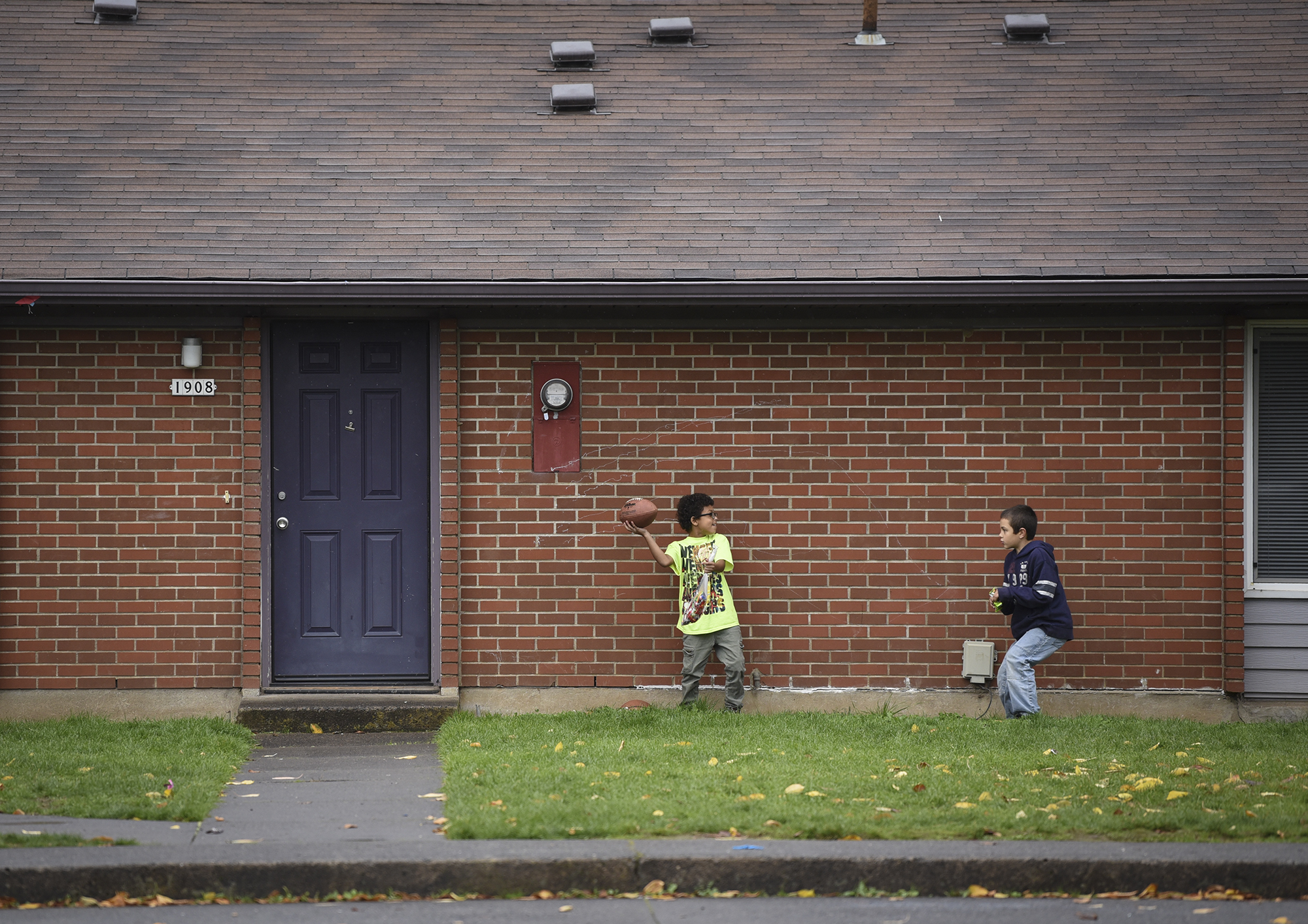 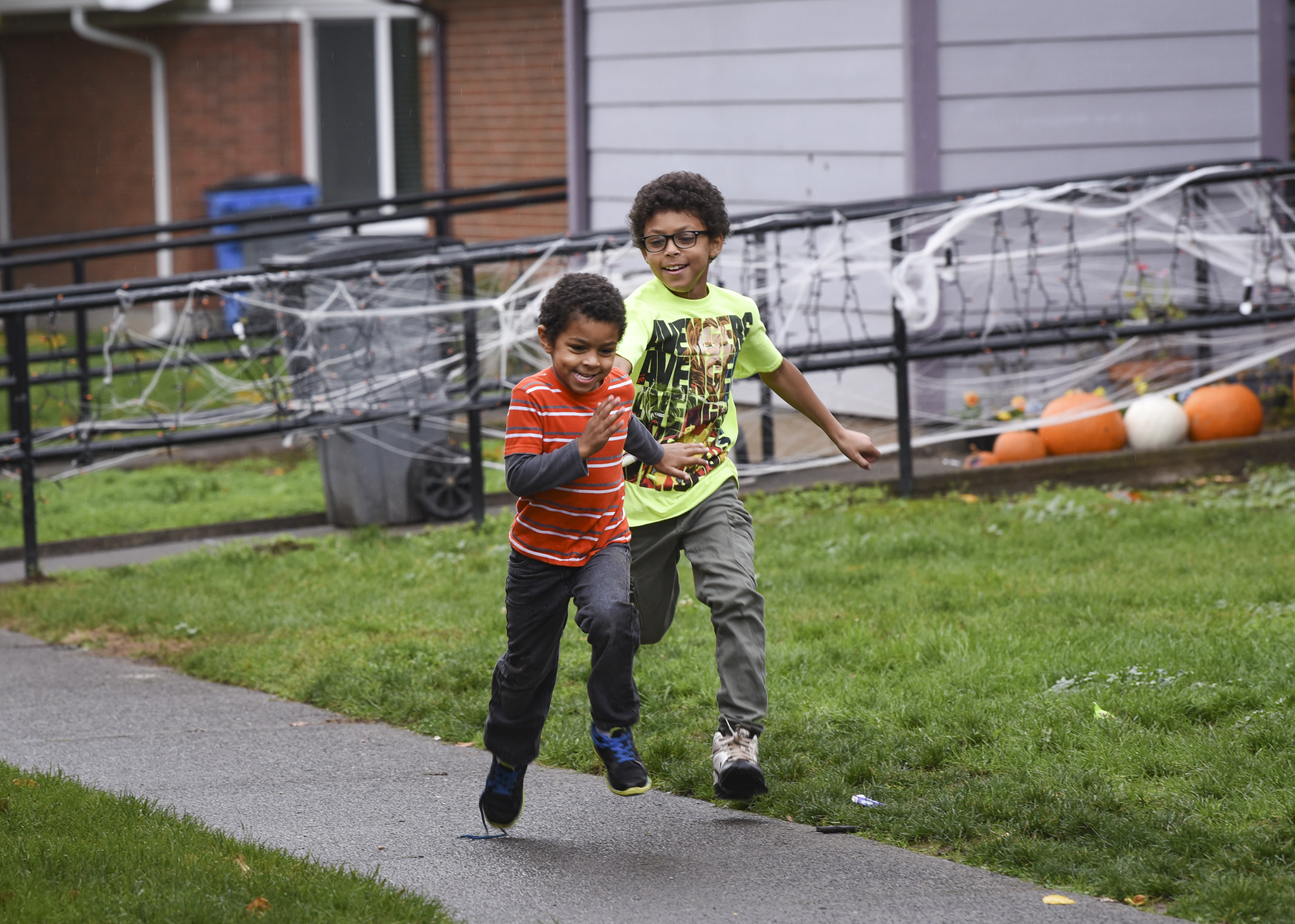 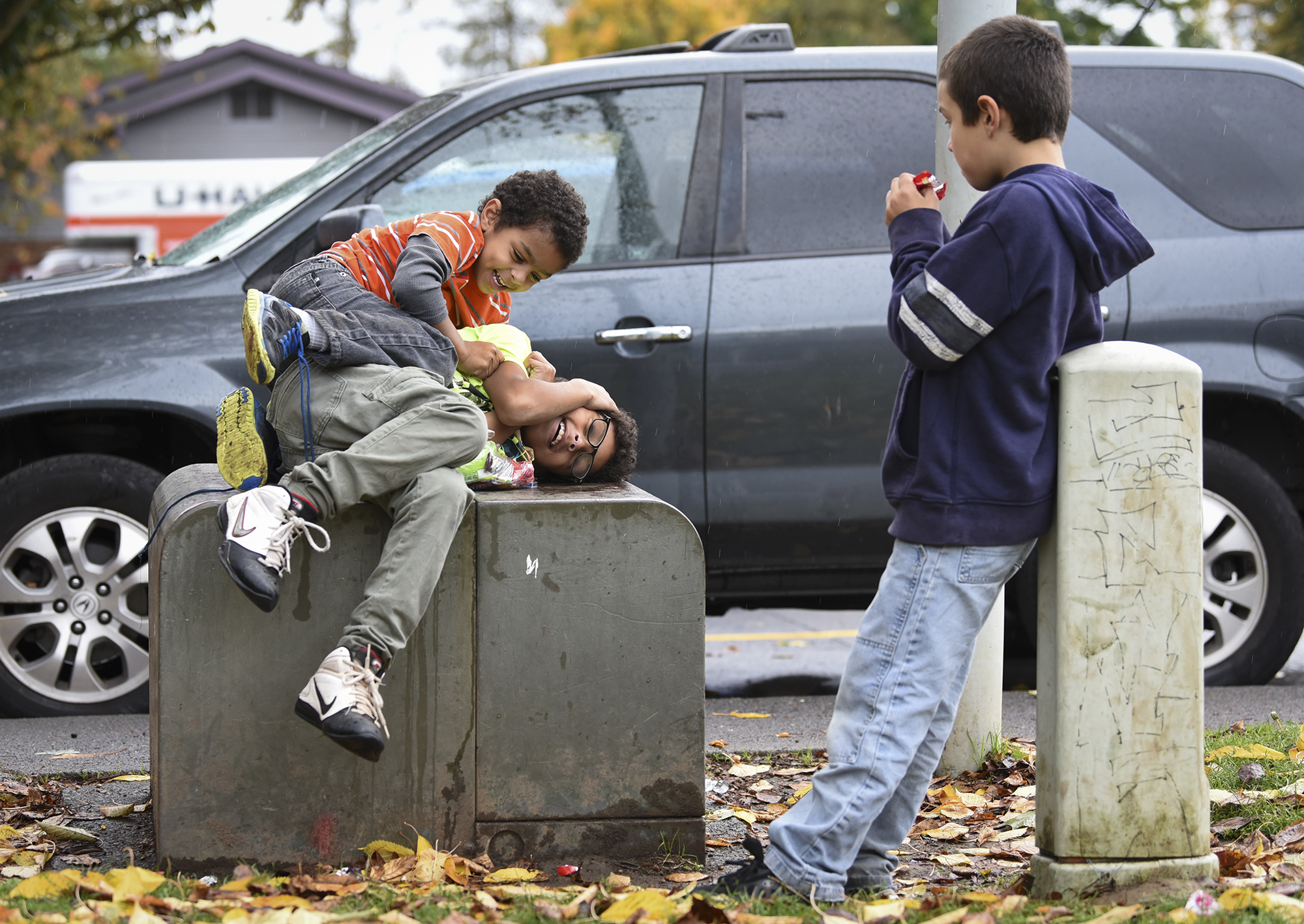 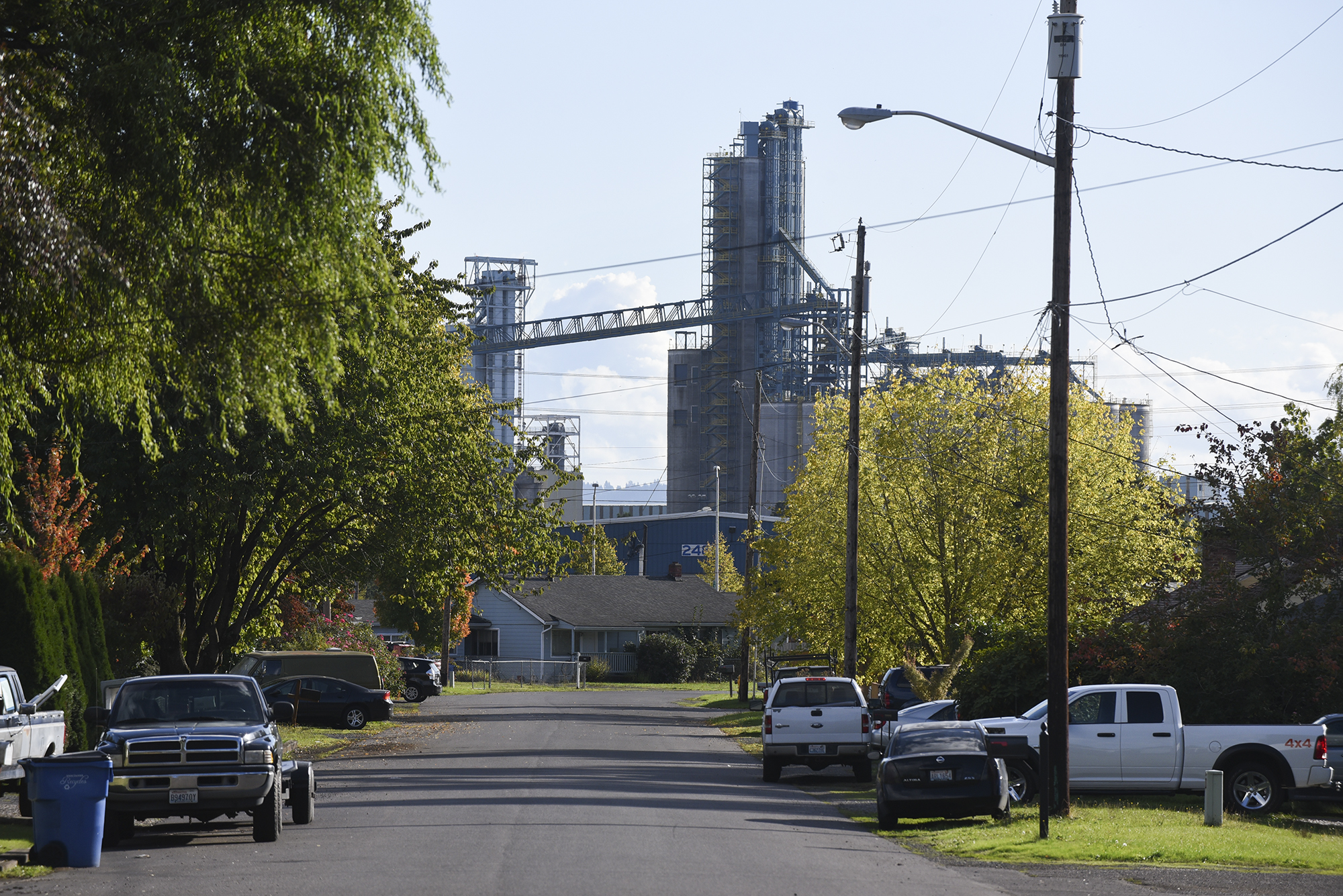 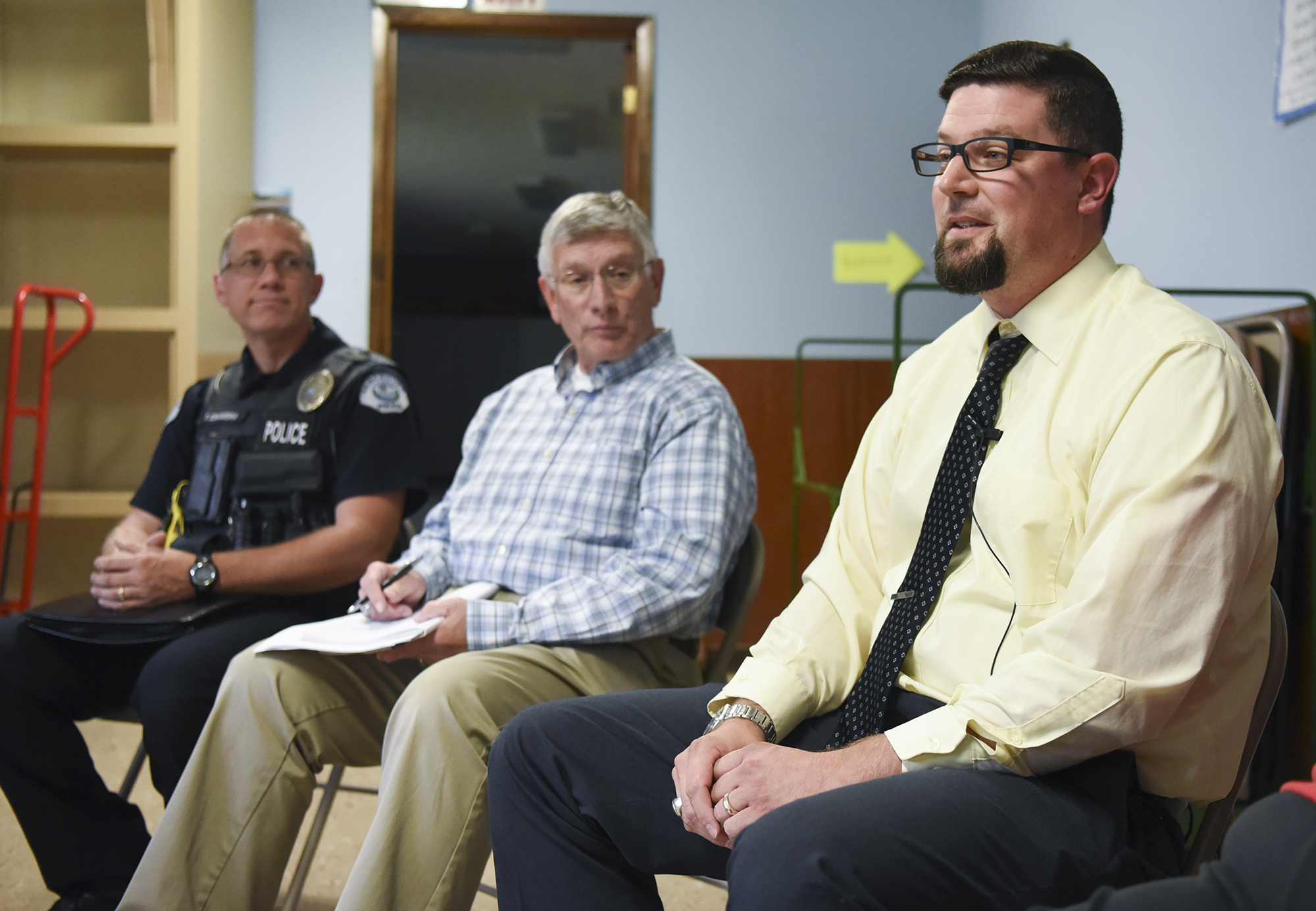 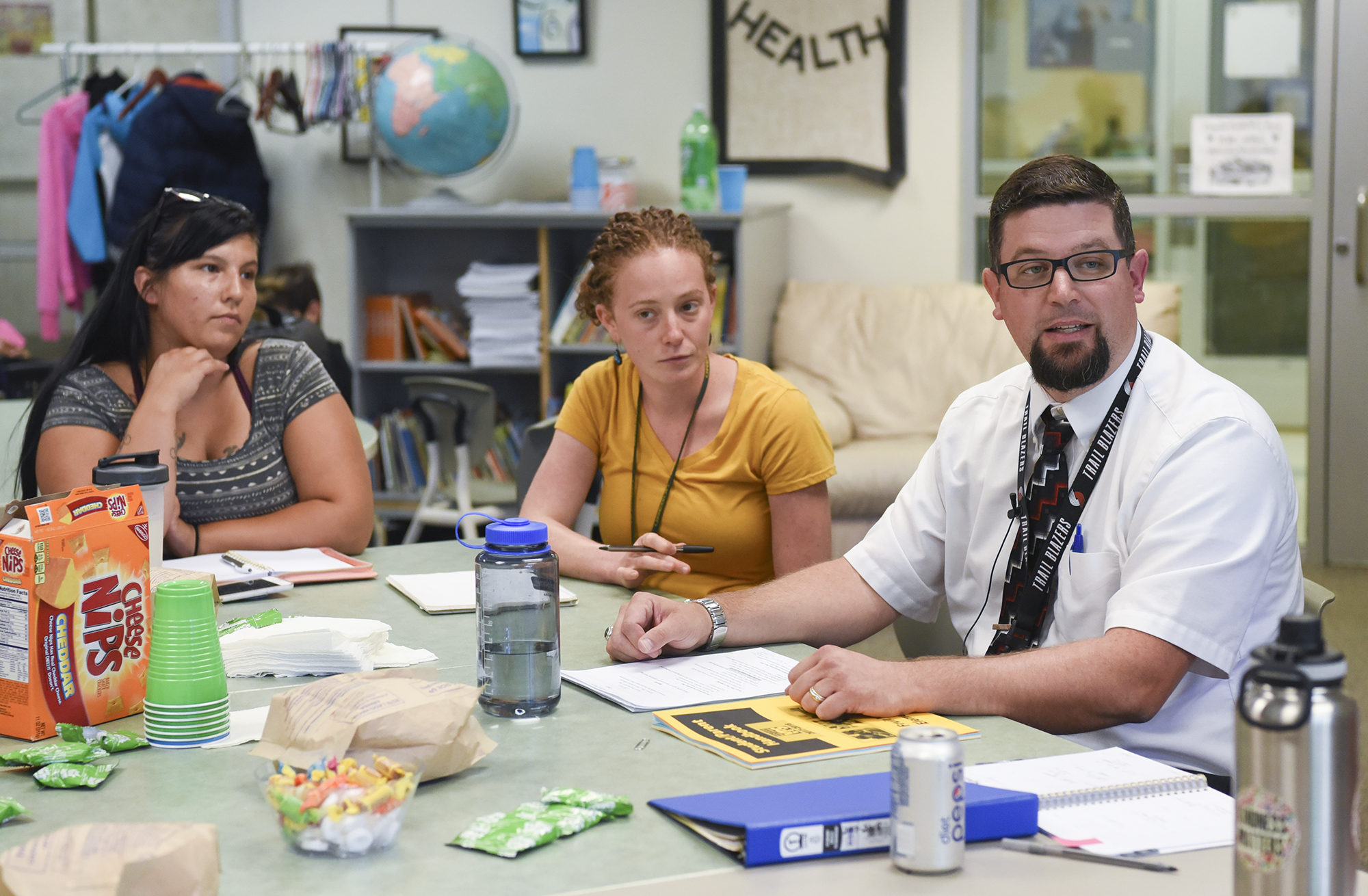 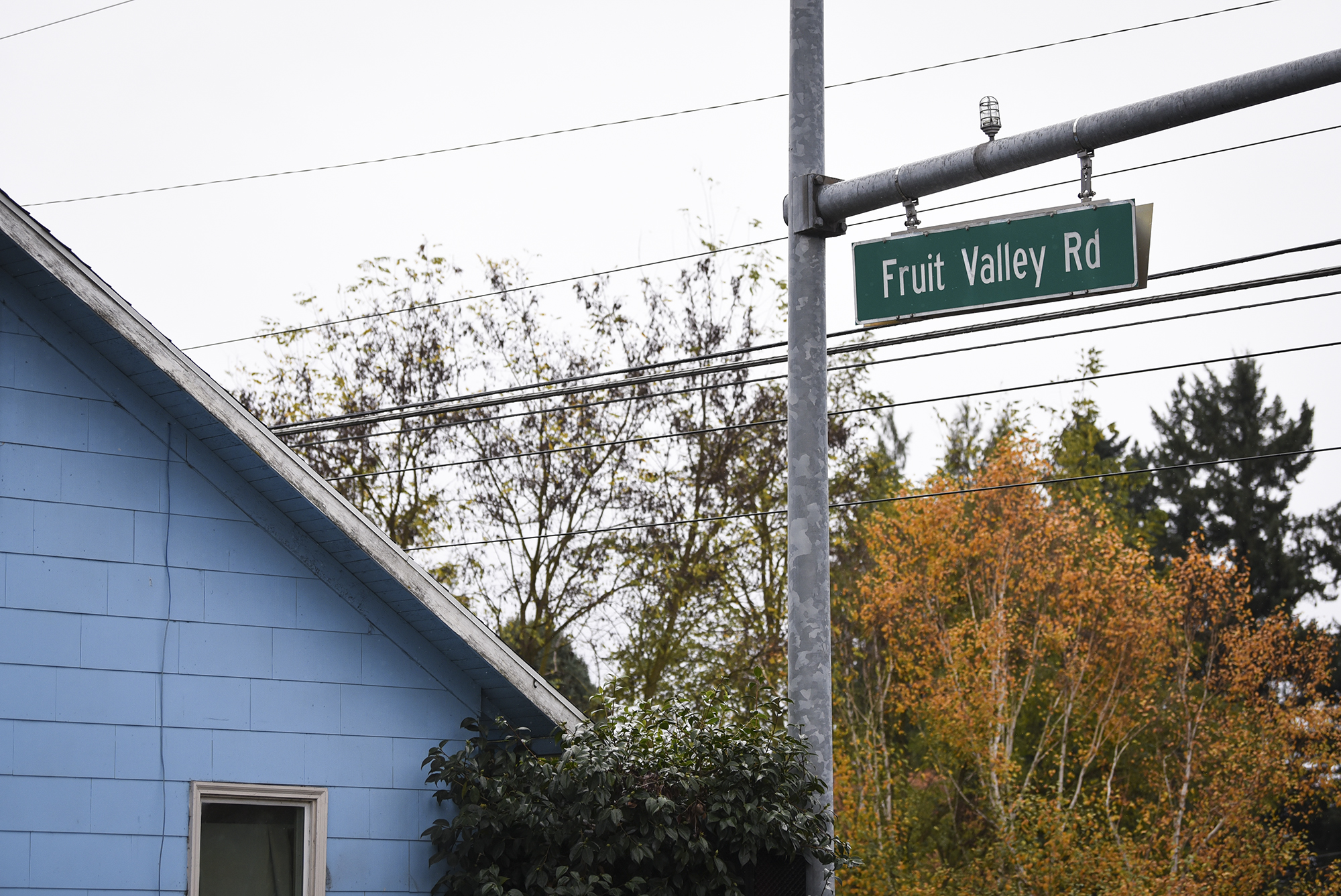 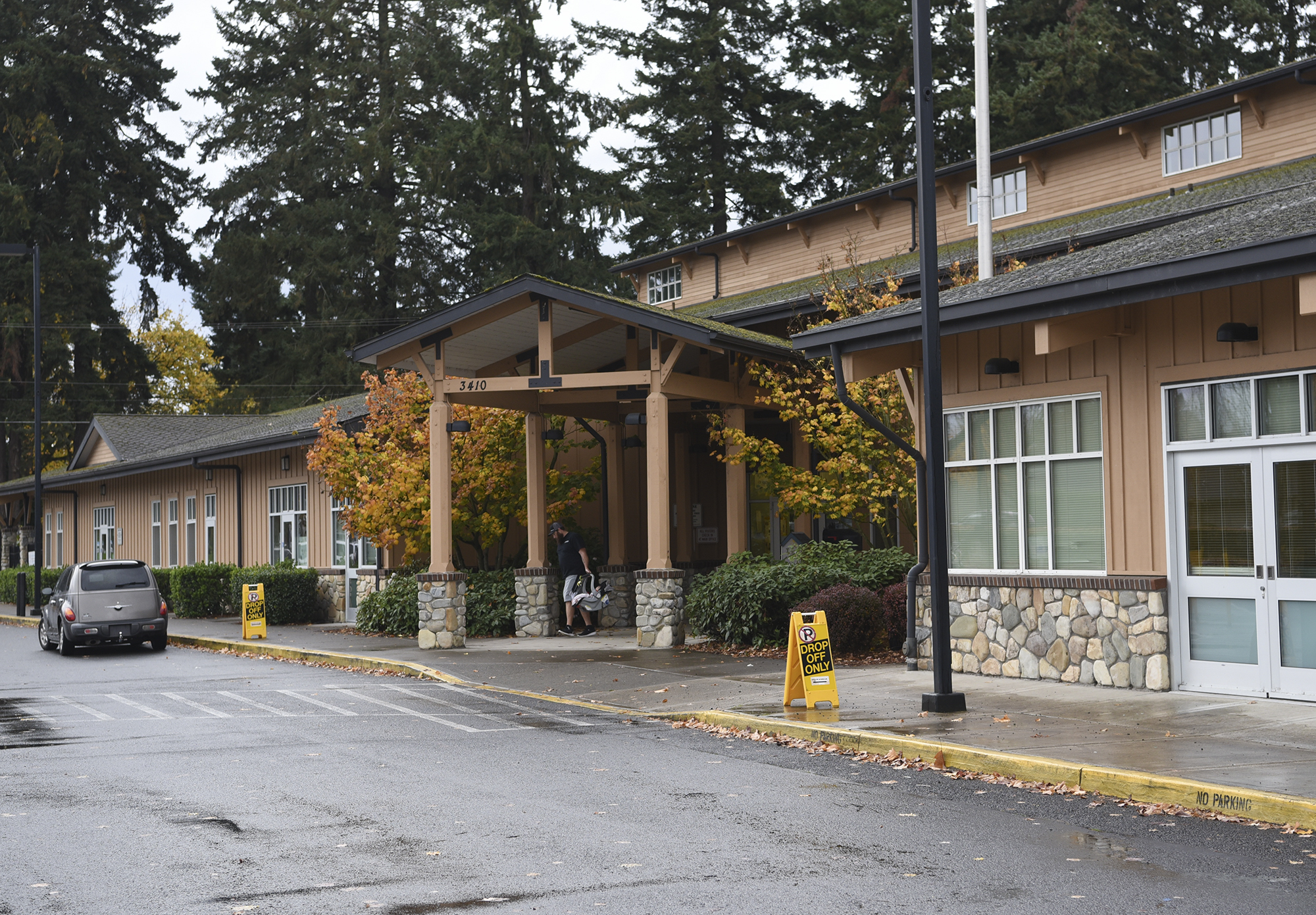 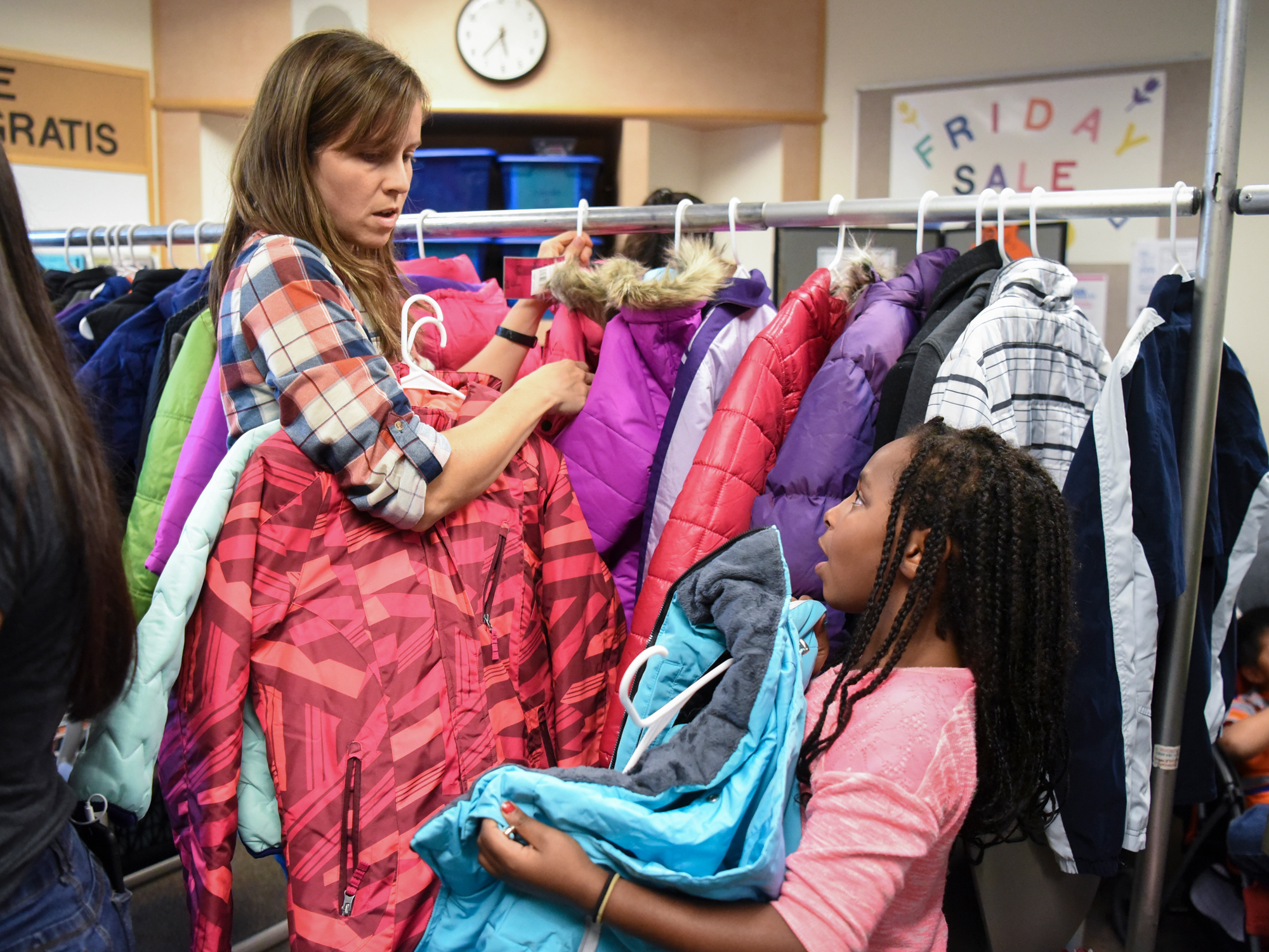 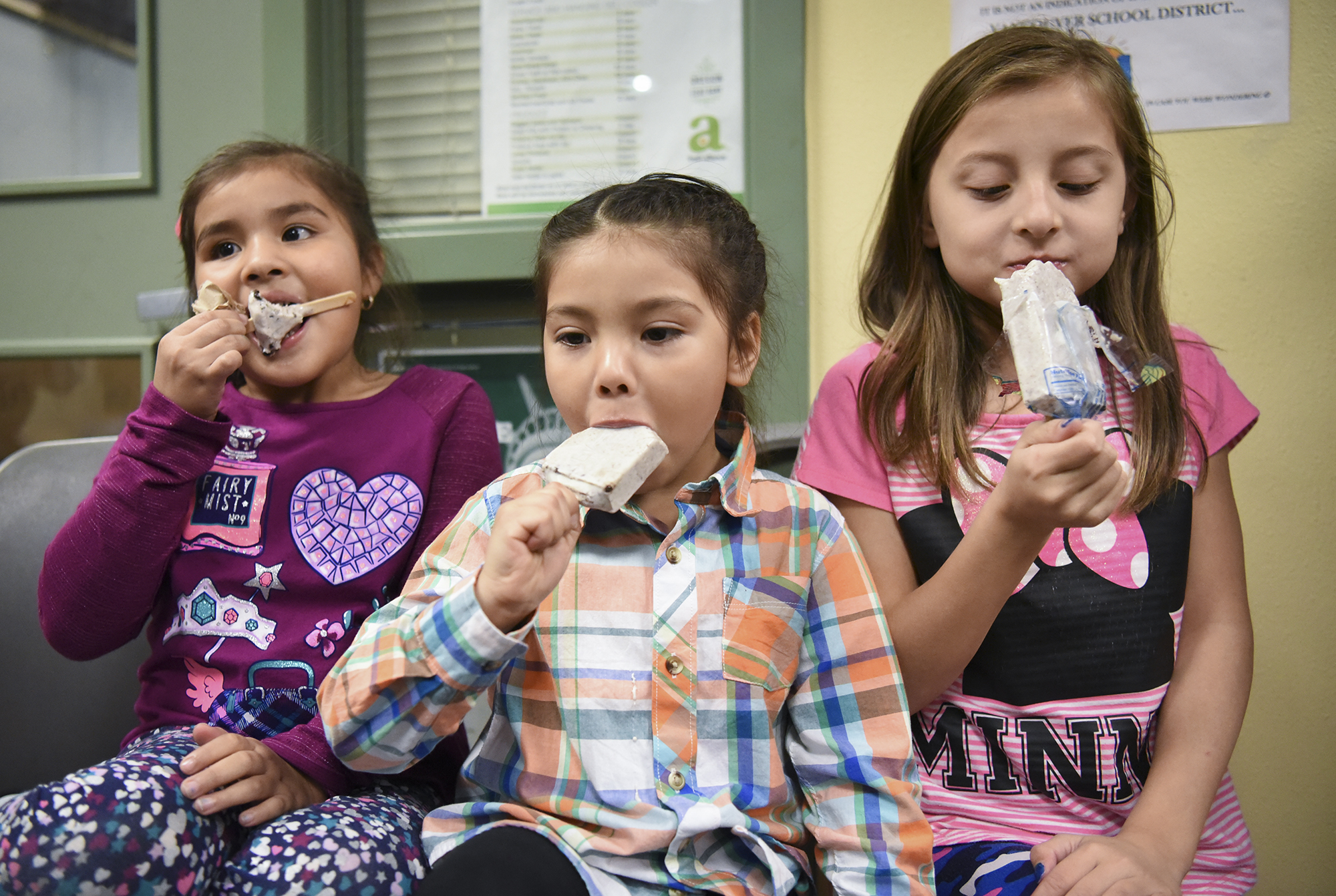 A group of moms chattered in Spanish in the school’s Family-Community Resource Center late last month. Together, they cut out paper apples and pumpkins, and block letters for a poster that spelled out “Welcome to the Fall Festival.”

About three years ago, a group of Spanish-speaking mothers who were interested in volunteering — but who worried they couldn’t help because they don’t speak English — launched the grass-roots effort with Aurea Garcia, who speaks English, leading the charge.

The mothers’ efforts started small. Members watched children on their way to school to make sure they arrived safely. This year, with Fechter’s support, the organization became an official arm of the parent-teacher organization.

“ ‘We trust you and we’re going to be there to help you with whatever you need,’ ” Fechter recalled one mom saying to him earlier this year.

Garcia said school events have blossomed with the group’s support, bringing in community members beyond students and their families. This year’s Fall Festival attracted more than 350 visitors.

Here is the latest data from the Office of Superintendent of Public Instruction on students at Fruit Valley Community Learning Center released in May:

“Everybody in this neighborhood knows a child who goes to this school,” Garcia said.

Continuing and expanding that community engagement is one of Fechter’s goals for the school. The Family-Community Resource Center’s walls are covered with posters and corkboards with information in both English and Spanish about free classes, housing resources and neighborhood activities. The school’s front entry becomes a food bank every Wednesday for families as well as the community at large. Educational Opportunities for Children and Families operates a preschool for low-income families, and Southwest Washington Child Care Consortium offers day care services.

“We try to be that focal point,” he said. “A positive place for people to come and meet.”

Fechter took to the intercom on the first day of school and laid down the challenge.

“What is your why?” he asked. Why do staff come to Fruit Valley every day? Why do they want to be in education?

Why are students pursuing an education? Why do their teachers talk about colleges and careers?

Fechter’s calls his “why” — and the challenge he has set for his teachers — “The BHAG,” or Big Hairy Audacious Goal. He wants Fruit Valley to become one of Vancouver’s top three Title 1 schools — campuses where 40 percent or more of the students are from low-income families. To achieve this, more than half its students will need to pass standardized math and English tests.

He wants the school to meet that goal within three years.

“That is a very lofty goal,” he said. “The nice thing is, people see that as a target to go to.”

Data is scary, Fechter admits. But as he and his staff invest in Fruit Valley’s families and children, Fechter is confident the school will make good things happen.

“We’re a community hub,” he said. “I think we’ve got to be there and support them in their challenges and successes.”

Fruit Valley Community Learning Center is one of 12 Title I elementary schools in Vancouver Public Schools — campuses where 40 percent or more students receive free- and reduced-price lunches, a barometer of poverty.

The school also has a disproportionate rate of English language learners, according to the Office of Superintendent of Public Instruction.

That qualifies the school for federal and state dollars to provide additional support for students in need.

“Parents can come for resources beyond that which they thought a traditional school may offer,” said Travis Campbell, the district’s chief academic officer. “We have mental health providers working for some of our youth that need those services, social workers are part of some of our schools, the (Family-Community Resource Center) resources and in some cases tips on affordable housing.”

“The school is becoming a resource for not just our students but their families,” he continued.

Greg McGreevey, executive director of the Fruit Valley Foundation, said the school is positioned to respond to the “systemic generational poverty” that pervades the neighborhood. He called the school the “glue” tying together a variety of entities and social services.

“They can head off a lot of the barriers,” McGreevey said. “They’re serving families well above what you would expect a normal school to do.”

Mom with breast cancer makes most of time

by Marissa Harshman
Next: History

Shadows of the past look different by candlelight at Fort Vancouver