The Woodland High School graduate was just 19 years old when he enlisted in the U.S. Navy in Portland. He was 20 years old when he arrived aboard the battleship USS Oklahoma. And he was just shy of 21 when the Japanese military attacked Pearl Harbor on Dec. 7, 1941, launching the United States into World War II.

Pearl Harbor and the USS Oklahoma

Eighteen ships sank or ran aground, including the USS Oklahoma. Commissioned in 1916, the 583-foot battleship capsized after taking several torpedo hits.

Thirty-two men were rescued from the Oklahoma’s overturned hull in a rescue mission that went on for hours. Another 429 died, including Musician Second Class Francis E. Dick of Woodland.

Dick was among the 429 people who died aboard the Oklahoma that day. For decades his unidentified remains lay in one of 46 mixed caskets in Hawaii before being transported to a lab in Nebraska as part of an identification program through the Defense PIO/MIA Military Accounting Agency.

Nearly 78 years later, that program was able to identify Dick’s remains, put them on a plane and send them home for a memorial and formal burial.

Dick’s younger sister, Vancouver resident Carole Green, is his closest surviving relative and one of the few people alive who knew him firsthand. Green found out in September that her brother’s remains had been identified. She recalled her first thought after hanging up the phone:

Green’s emotions about the whole thing are complicated. Only 3 years old when Dick went off to war, she doesn’t really remember him. But she grew up in a family that never stopped missing their son and brother, and she heard stories. He’d sweep up his baby sister and dance with her, Green remembers hearing. He’d try to get her to talk.

“It’s hard to tell you how I feel. I watched Mom and Dad mourn for him for years,” Green said.

Francis earned the nickname “Ham” as a baby, conferred by a cousin who commented during a diaper change that he looked like a fat little ham. The name stuck.

What Green heard growing up was this: Ham never met an instrument he couldn’t teach himself to play. A born musician who could sight-read music, Ham was also an athlete, an actor and a dancer. There wasn’t a mean bone in his body. The girls loved him.

He grew up in the era of the big bands, and would enter and win jitterbug contests with a close female friend who would go on to marry his brother.

“He could play anything he picked up for about five minutes. He was really gifted,” Green said.

“I never, ever dreamed even in my lifetime that they would find him. That’s a lot of people and bones that they gotta go through.”

1,338 of those bodies remain unrecovered.

62 of the unrecovered are from Washington.

429 people died aboard the USS Oklahoma during the attack.

Using a combination of techniques, a team of 10 analysts at Offutt Air Force Base near Omaha can identify the remains of sailors from the USS Oklahoma with tremendous confidence. But it’s a mammoth undertaking, and speed is of the essence — soon, there won’t be any surviving family members left to send these fallen servicemen home to.

“We have about 13,000 specimens, individual bones we can count,” said Dr. Carrie Brown, DPAA forensic anthropologist and the leader of the team tasked with tracing remains from the ship.

When the identification program started in 2015, the list of people whom those bones could belong to was 394 names long. With each positive identification, it’s been reduced to 196.

The collection of techniques used to identify 78-year-old human remains wouldn’t seem out of place on a detective show.

The identification tools run the gamut, from old-school — circumstantial and historical evidence recovered from the scene, like dog tags or rank insignia — to more modern-day DNA analyses.

In Dick’s case, his remains were identified using autosomal DNA that was compared with a sample from his little sister, Green. The results lined up with the historical and circumstantial evidence, as military records show him arriving on the ship around six months before the Pearl Harbor attack.

“All of our cases are essentially cold cases,” Brown said. And while DNA is certainly handy, it’s not conclusive. In order to make a positive identification, at least two threads pointing at the same person need to converge.

“We always use a multipronged approach — multiple lines of evidence,” Brown said. “It doesn’t happen in 45 minutes like in (the TV drama) ‘CSI.’ It’s a little bit more than that.”

Easier identifications can take as little as eight days. Others may take decades, depending on the evidence on hand.

The USS Oklahoma team started its task by matching dental records to intact skulls. That’s relatively simple when the records are available, but more complicated in practice for a few reasons, Brown said.

“We have their induction records. When they joined the military they got a dental exam. Those (records) range from very good to absent,” Brown said.

Of course, some skulls don’t have intact palettes. There’s also the issue of time. A crew member who joined at 20 and died at 21 would have a fairly accurate snapshot of their dental work preserved for Brown and her team to access. But what about someone who enlisted at 18 and died at 40? Their induction records wouldn’t serve as an accurate depiction, and their updated medical records went down with the ship.

“There could be a lot of room for discrepancy,” she said.

After identifying everyone they could with dental information, the team moved on to isolating the outliers — people who for some physical reason stood out from the majority of the crew.

If the men were particularly old or particularly young, tall or short, or of a different race, it’s easier to tell their remains apart, Brown said. That technique also worked for anyone who had a rare DNA sequence.

“We’re trying to get all the ones that have some piece of evidence that distinguishes them from everybody else along the way,” she explained. “If you have a rare sequence, or are 6-foot-5, or are 50, or 18.”

A crucial part of the identification process included collecting DNA samples from known next of kin. Without a library of DNA samples from close relatives, there would be no way to compare results.

“We go out and we collect as much of the data as we can ahead of time,” Brown said.

Her team uses both nuclear and mitochondrial DNA testing. Autosomal testing is a type of nuclear DNA that’s unique to each individual, making it a powerful testing tool, but there’s only one copy of nuclear DNA within a cell.

“It preserves really well, and there’s a ton of mitochondrial DNA in a cell,” Brown said. “We don’t have self-references on file. We can only go back in time genetically with their families, so we can get family reference samples that way.”

At this point, it’s a race against the clock for the team of analysts to identify USS Oklahoma remains as fast as they can. Not because the evidence is eroding, but because networks of families and friends are.

Many of the men who died that day were young and never had children. Their parents are long gone. Even people who knew them are aging and dying. A few, like Dick, have surviving siblings.

Most of the sailors being identified have descendants from extended family that they never met. With increasing frequency, those are the people left to claim the remains when they finally do come home.

“We are dealing with second-, third-, sometimes fourth-removed from the actual person,” said Chuck Prichard, a spokesman for the DPAA.

But every once in a while, you get a case like Ham Dick’s. Carole Green might have been too young to remember much about her brother, but she feels a connection to him.

“That’s why we’re trying to go as fast as possible, because there’s still some siblings left,” Brown said. 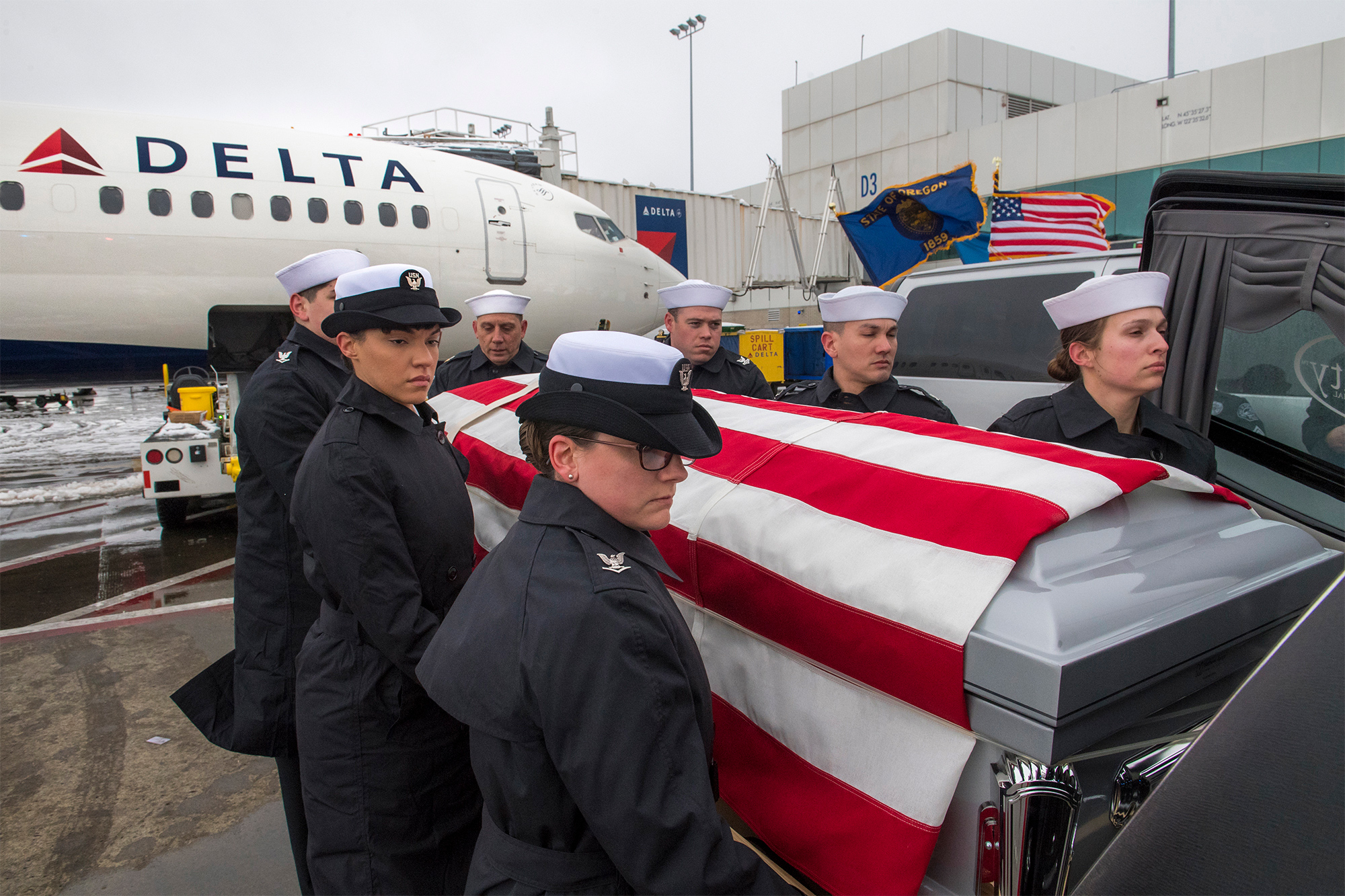 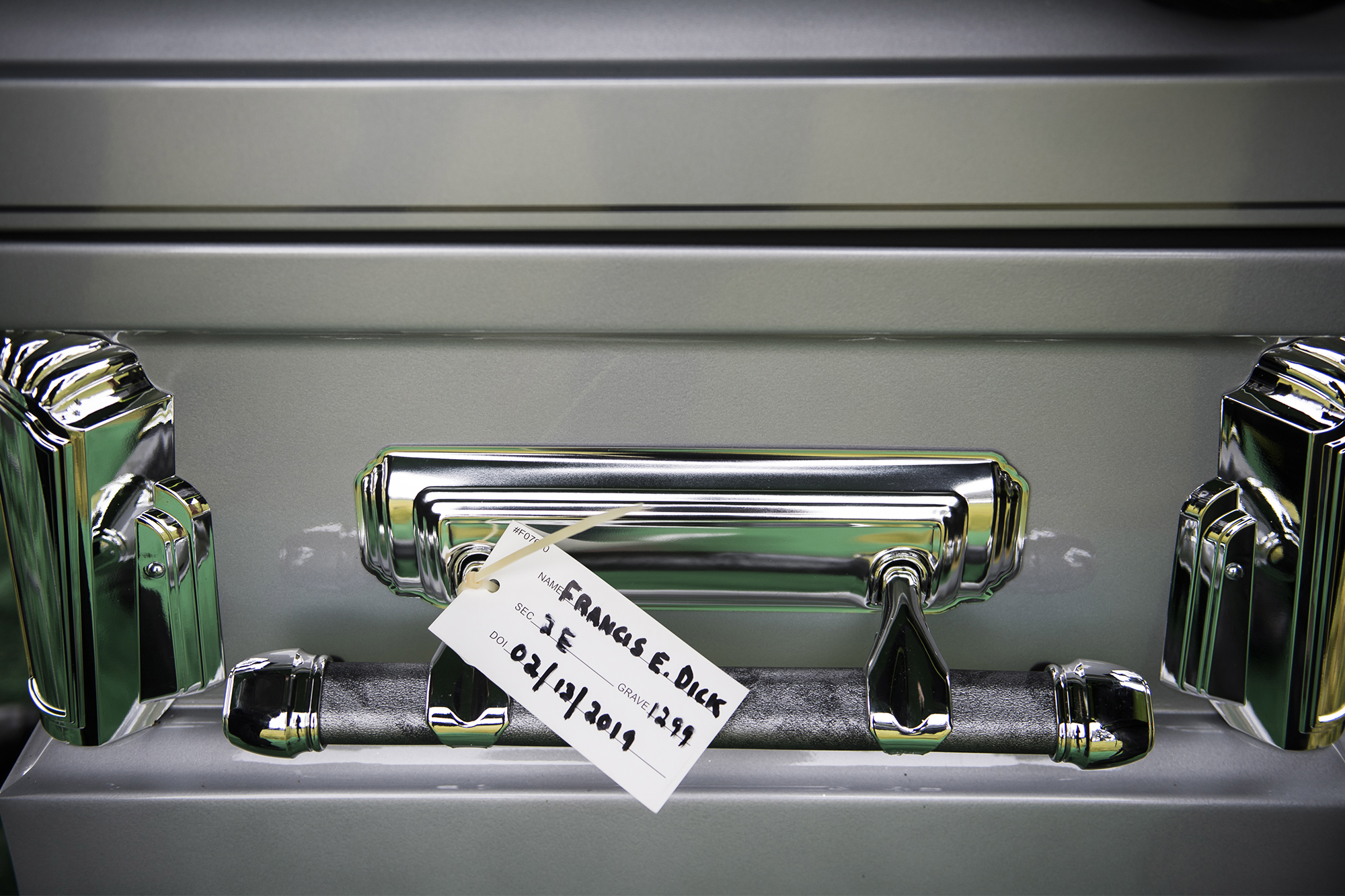 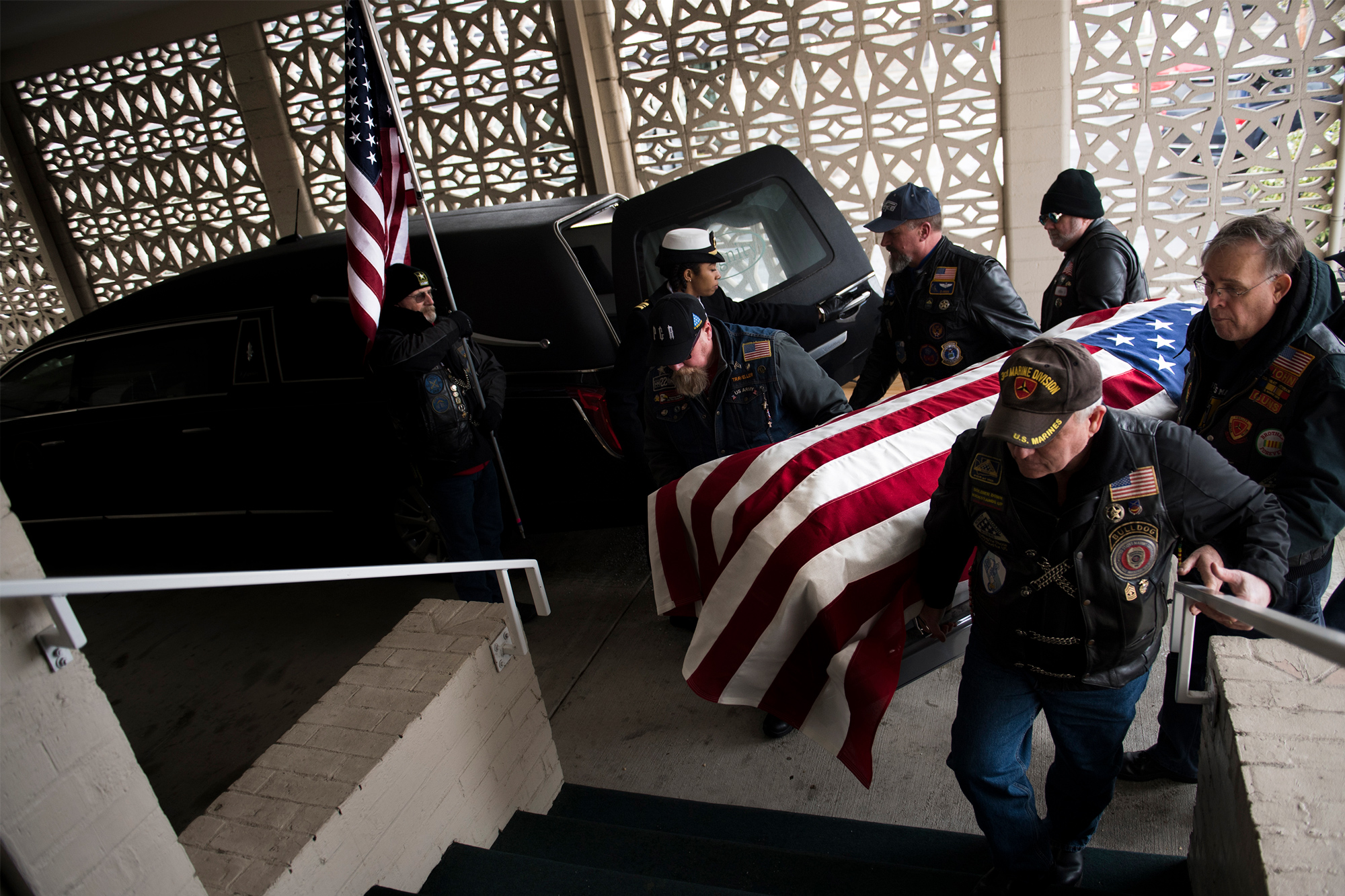 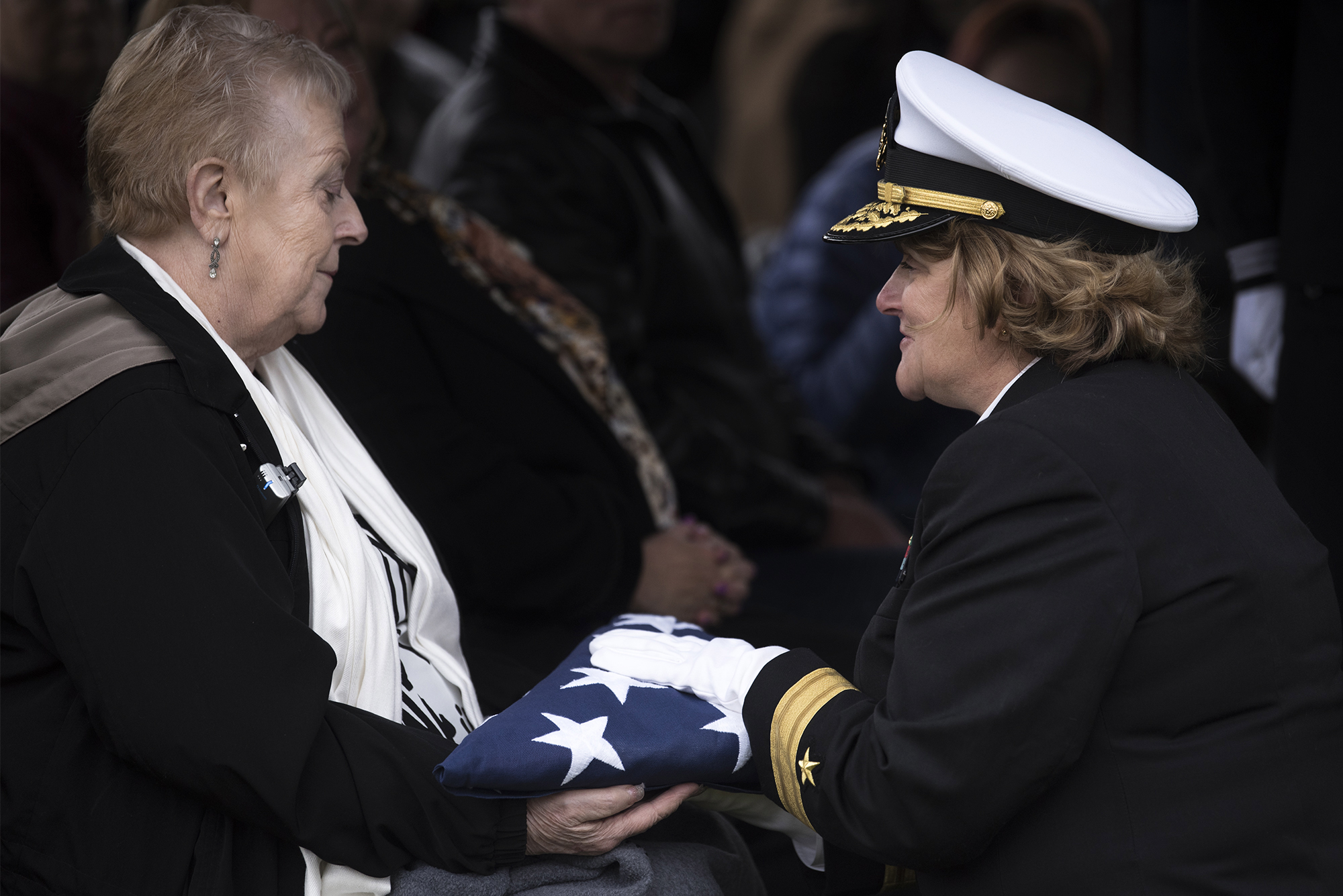 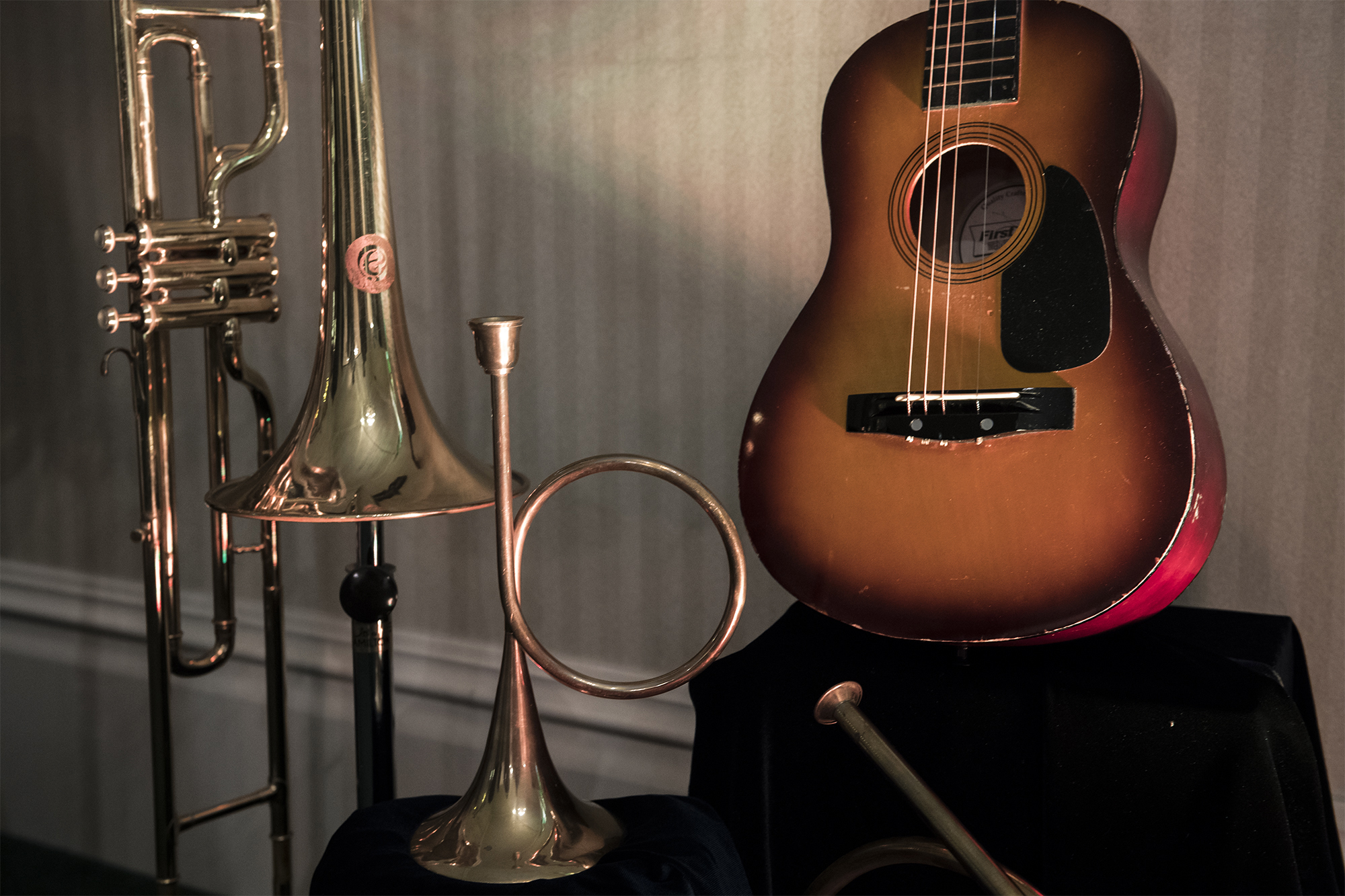 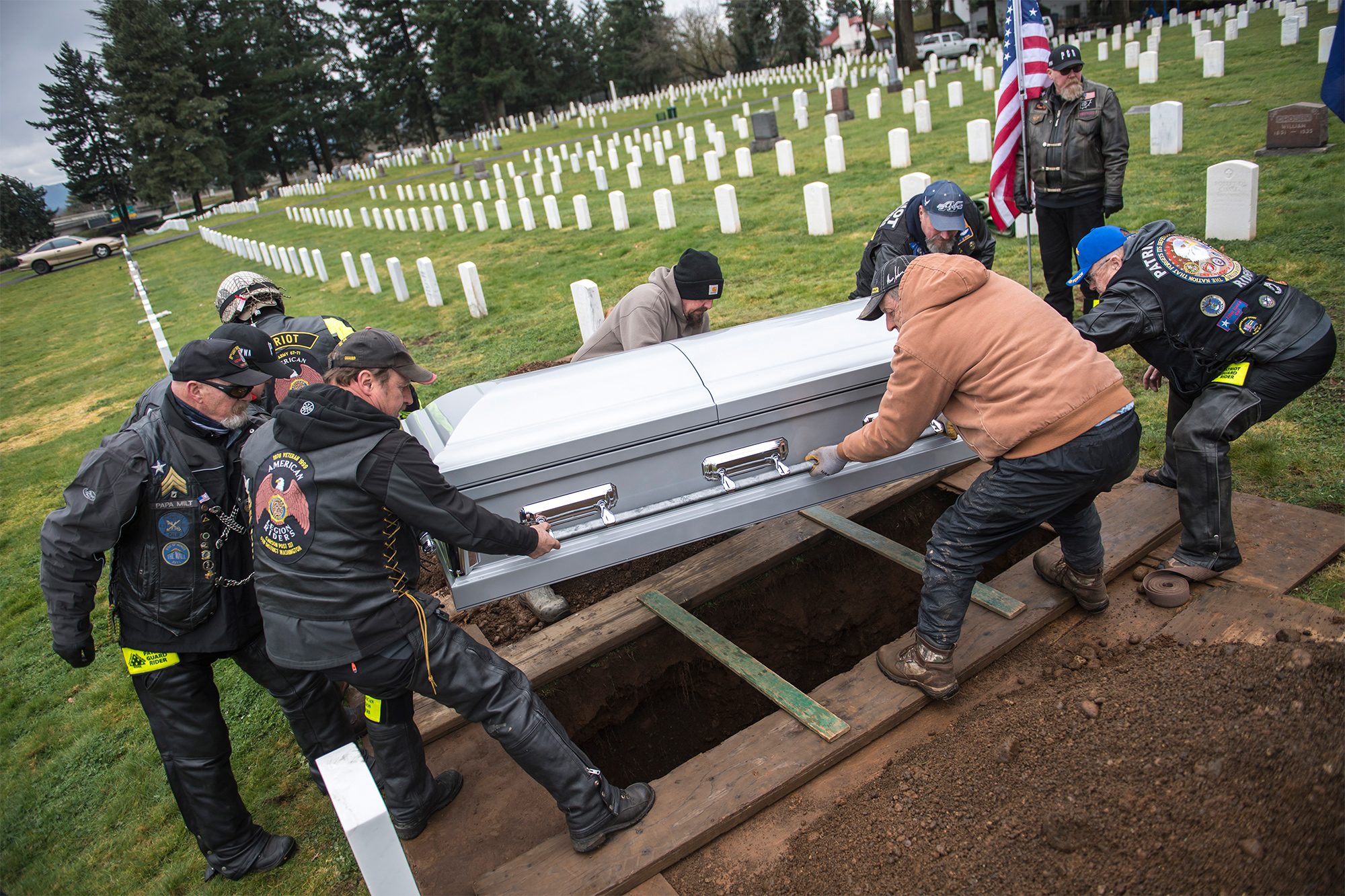 It was punishingly, bitterly cold, the middle of a snow flurry, when Dick’s remains flew into Portland International Airport on Feb. 9. But that didn’t stop the full military honors that accompanied his homecoming.

It also didn’t stop Green and her son Mike — Dick’s nephew, whom he never got to meet — from paying their respects on the tarmac.

Green’s eyes welled up when she approached the casket as it was carried off the plane, draped in an American flag. The tears caught her by surprise, she said. She didn’t expect it.

“I used to dream,” she said, “that I’d be in Hawaii and walk past a hospital, and there he’d be sitting. I’d look at him and I’d recognize him.”

“I would have loved to be able to remember.”

A memorial service at Vancouver Funeral Chapel on Feb. 13 was crowded with extended family who grew up hearing stories about Ham. Others came because they wanted to pay respects to a fallen World War II sailor, including descendants and relatives of fellow Pearl Harbor veterans and the Patriot Guard Riders.

They played a song — “It’s Been a Long, Long Time,” recorded in 1945 by Harry James and Kitty Kallen.

In the back of the room, you could just barely hear Green up front, singing along:

“You’ll never know how many dreams

“I’ve dreamed about you,

“Or just how empty they all seemed without you

“So kiss me once, then kiss me twice

“Then kiss me once again.

by Katie Gillespie and Katy Sword
Next: Life

The monks of White Salmon