A model of a modern jail — A look at Washington County

HILLSBORO, Ore. — The odds look grim for Richard Thompson. Every shift as a corrections deputy for Washington County, Ore., Thompson is left alone with 60 jail inmates in a living unit he’s responsible for supervising.

“I was maybe worried when I first started,” said Thompson, standing behind a desk lined with monitors and panels that control jail doors. “But not now.”
In the roomy yet austere living unit, inmates are free to play cards, chat, read, watch TV or get some fresh air in a small outdoor area — if they follow the rules. It feels more like a community center than a jail. At the end of his shift, Thompson barks “cell in!” Every inmate responds promptly, returning to their cells with no fuss.

The Washington County Jail is designed for direct supervision, an approach to corrections that’s being increasingly adopted across the country. The Clark County Sheriff’s Office has bought into the concept, but has been stymied from implementing it by the outmoded and cramped design of its 1980s-era jail.

Clark County is considering what to do with its aged and overcrowded jail. It’s considering costly upgrades to the facility that would allow it to implement and benefit from direct-supervision practices.

The National Institute of Corrections introduced the concept in the early 1980s, according to a paper on its website. Since then, it’s been adopted by hundreds of jails as a way to increase efficiencies and more effectively provide re-entry programs to inmates that’ll keep them from coming back.
According to the National Institute of Corrections, jails operating under the direct-supervision model have large open areas with a wide range of sight. One or two correction officers are present among the inmates, observing the group’s typical behavior and anticipating and addressing problems early.

Washington County Jail Cmdr. Matt Frohnert said that when the facility opened in 1998, it was a “clean break” from the previous jail, which was overcrowded and facing legal problems.

“We don’t look in on inmates, we are in with inmates,” said Frohnert.

The Clark County jail has a linear design that connects clusters of rooms with a maze of claustrophobic hallways. Currently, the only parts of the jail that use direct supervision are the work center and H Pod, where re-entry programs are offered, said Bishop. In housing pods, deputies monitor living units from a tower and will walk in periodically to check in.

“During the rest of the time, the inmates are in charge,” said Bishop.
Putting a deputy in each of the jail’s 27 living units just isn’t economical, said Bishop. The jail’s design requires deputies to escort inmates to visitation, medical or other services spread out through the building. Bishop summed up the situation with the jail’s design in one word: “inefficiency.”

‘Not a good environment’

In the Washington County Jail, meals are brought into the living units, and visitation areas are attached. In addition to a library, there are two classrooms where programming is offered for inmates.

The Clark County jail has a burgeoning re-entry program that’s unable to keep up with demand because of its tight quarters. The program is intended to connect inmates with services and support to address inmates’ underlying issues, such as chemical dependency or mental illness.

In 2016, the DLR Group, a design consulting firm hired by Clark County, released a report that noted that jails have become the “main community resource for those who are mentally ill and significantly acting out.”
Vanessa Gaston, director of Clark County Community Services, said that the design of the jail is not a therapeutic environment for inmates suffering from mental illness.

“It’s not a good environment for any kind of treatment,” she said.

The report recommended that the jail move to a direct-supervision model, stating that doing so would help the county “address evolving litigation trends” regarding treatment of mentally ill inmates, issues of confinement, overcrowding and isolation.

The intake area in the Clark County jail is cramped and getting inmates assessed for any behavioral or chemical dependency issues is a slow, tedious process, Bishop said.

“If we can get that assessment started early, especially for chemical dependency, that’s huge,” he said. 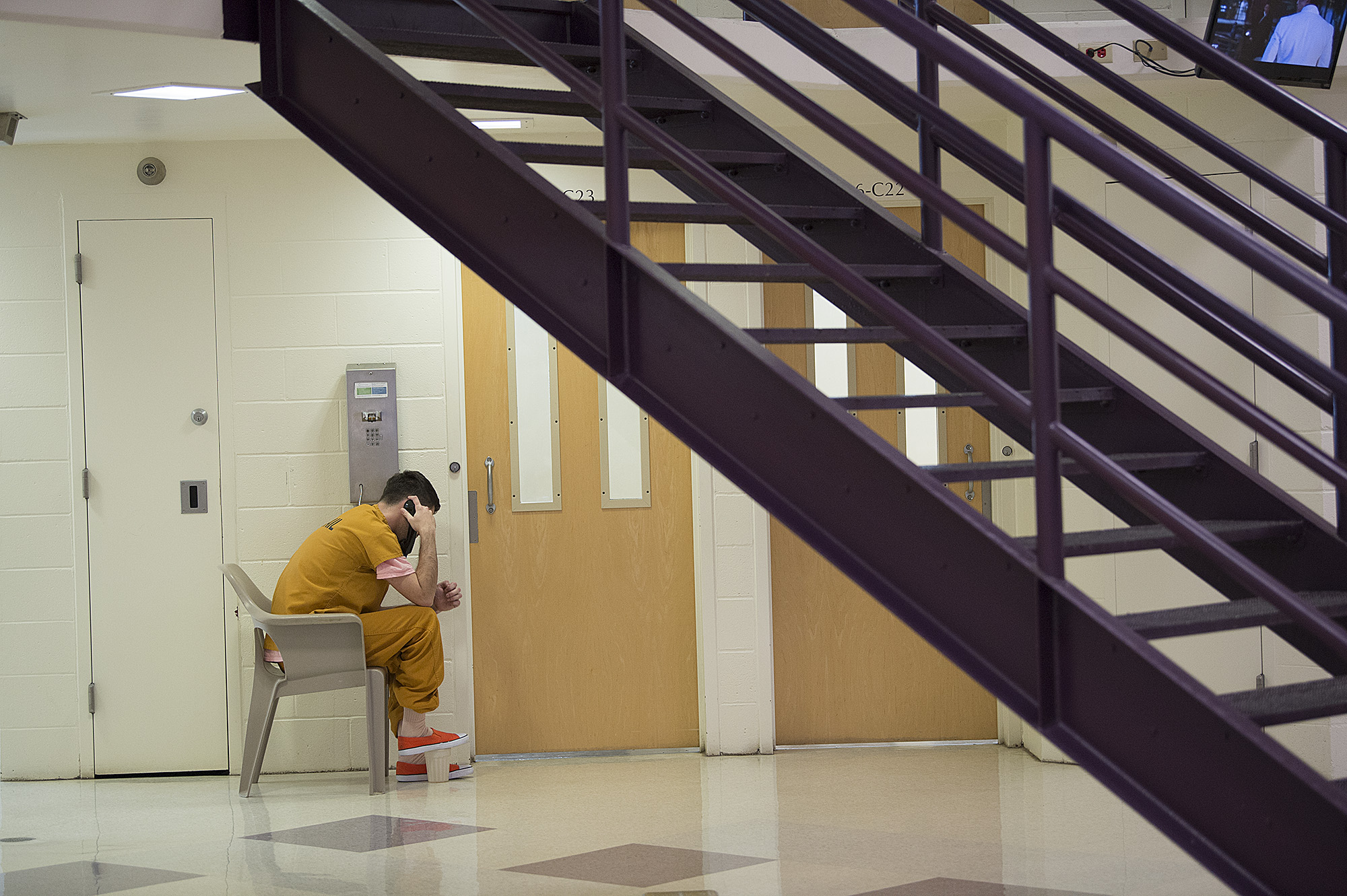 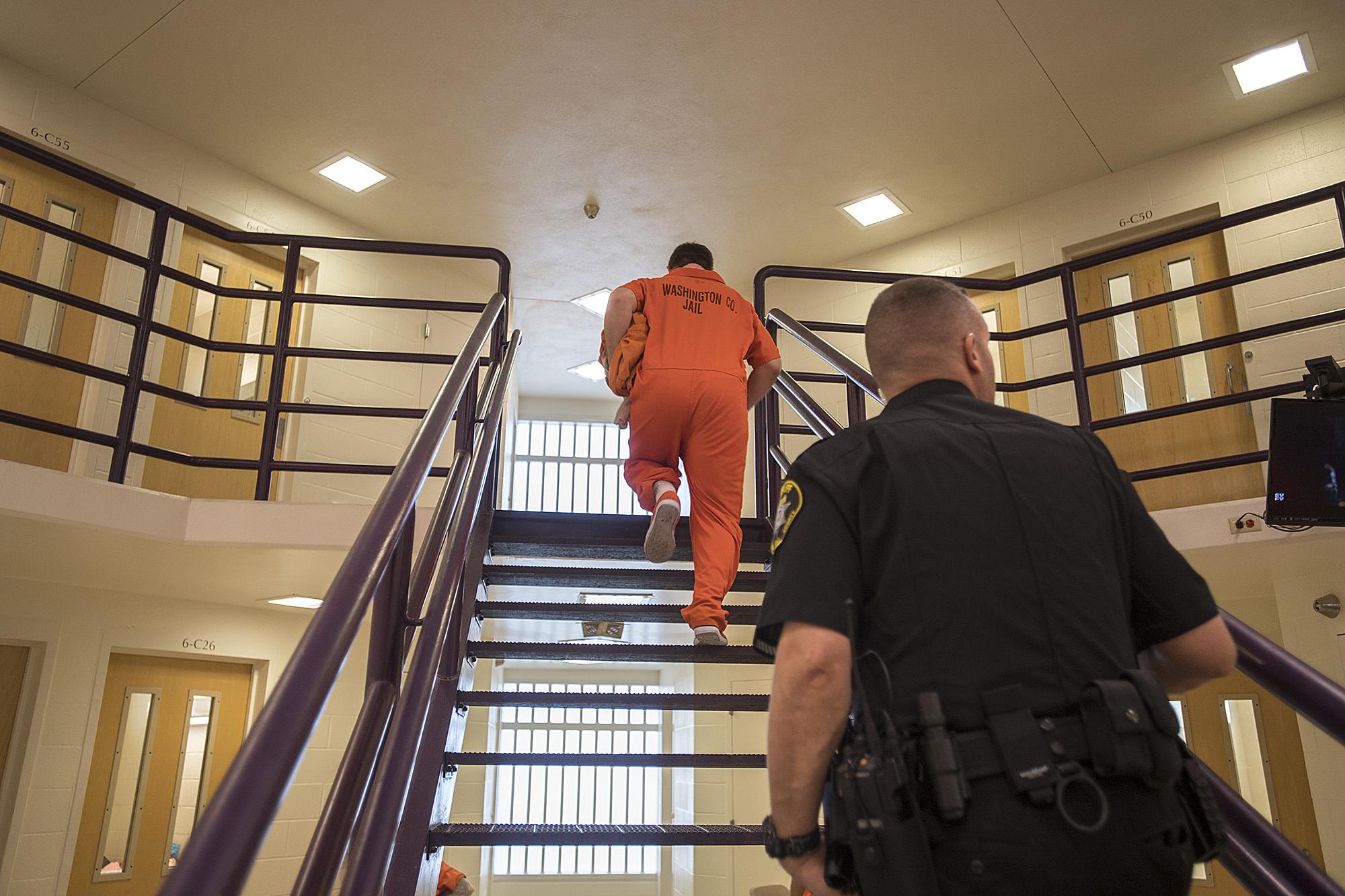 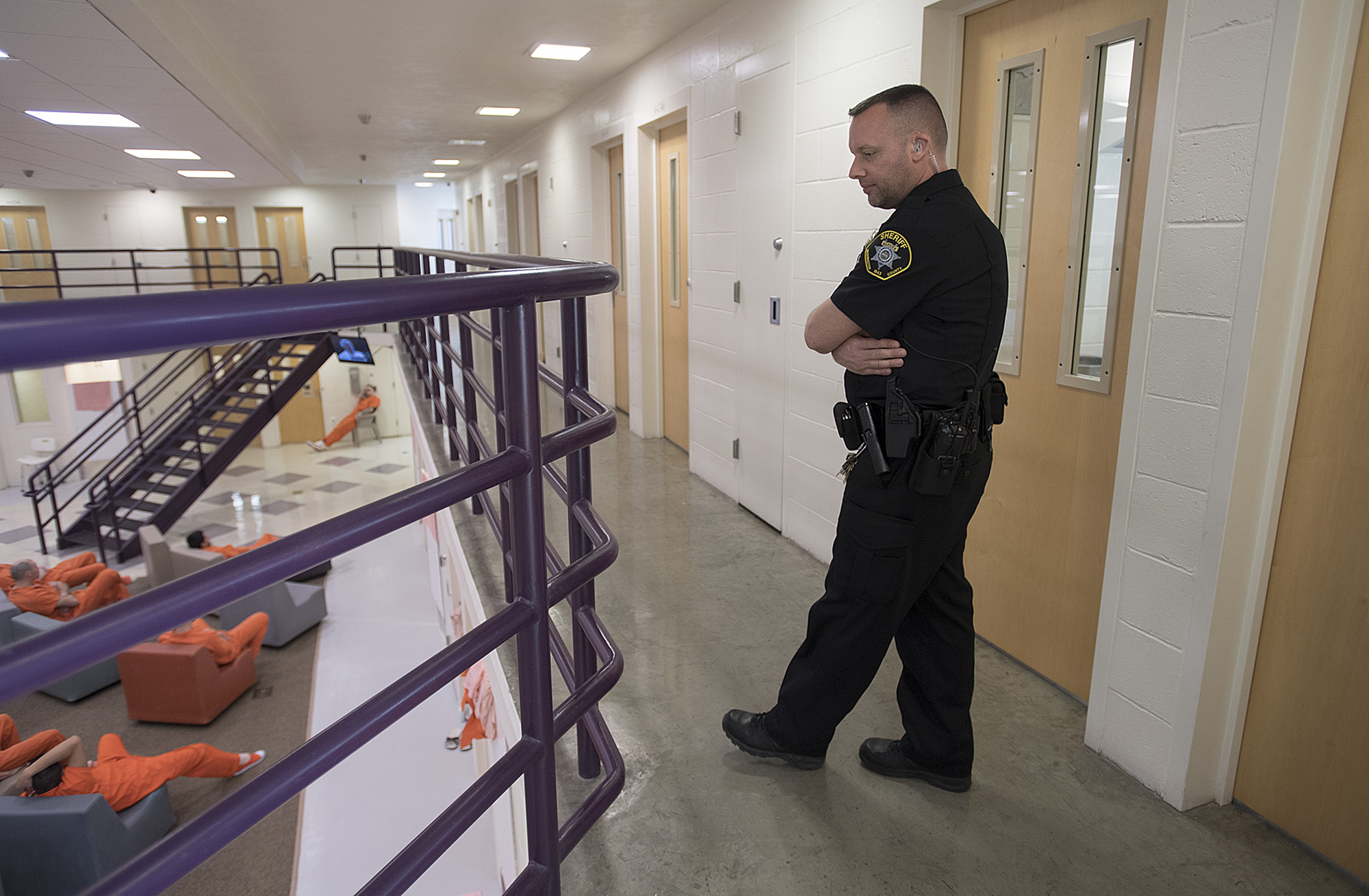 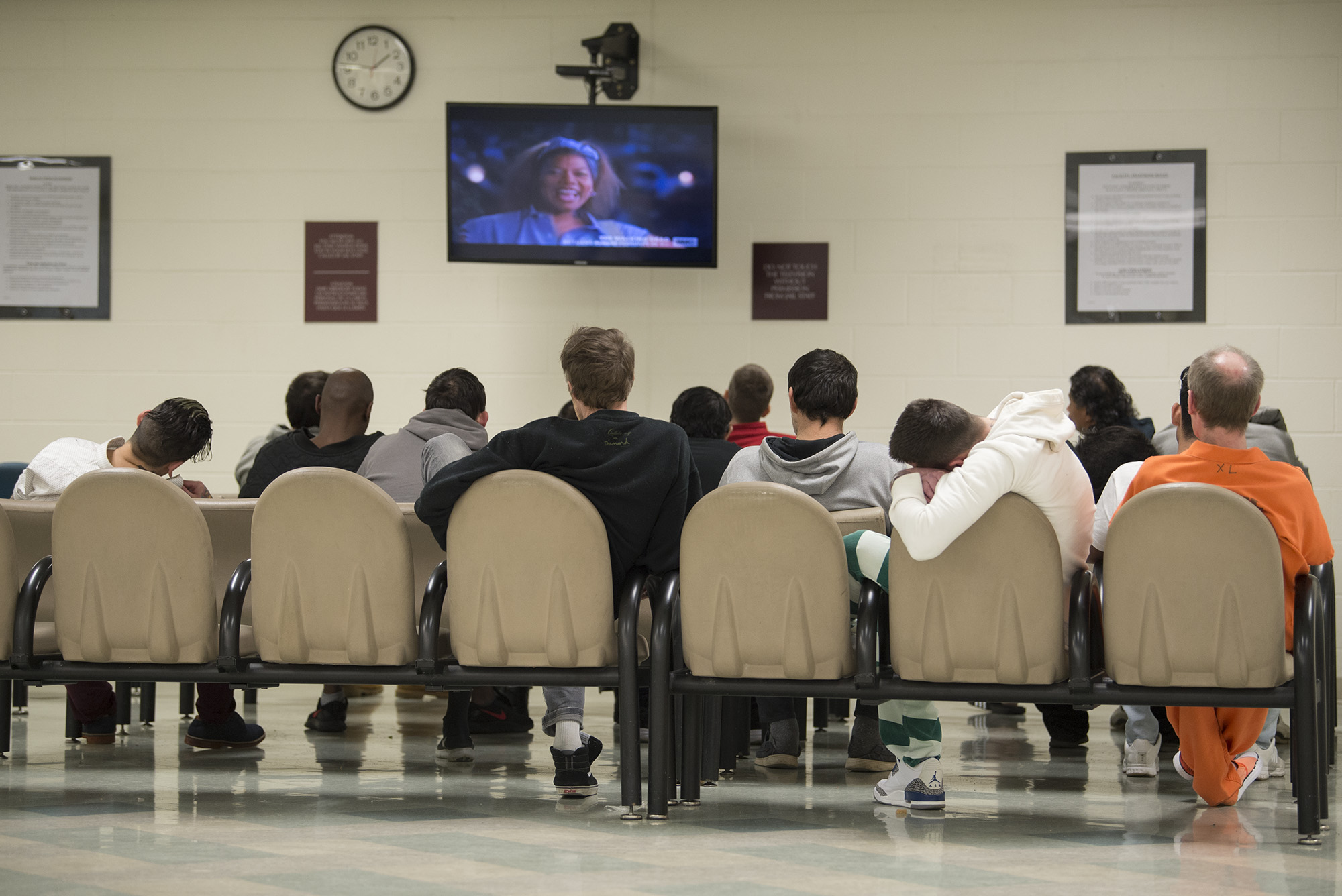 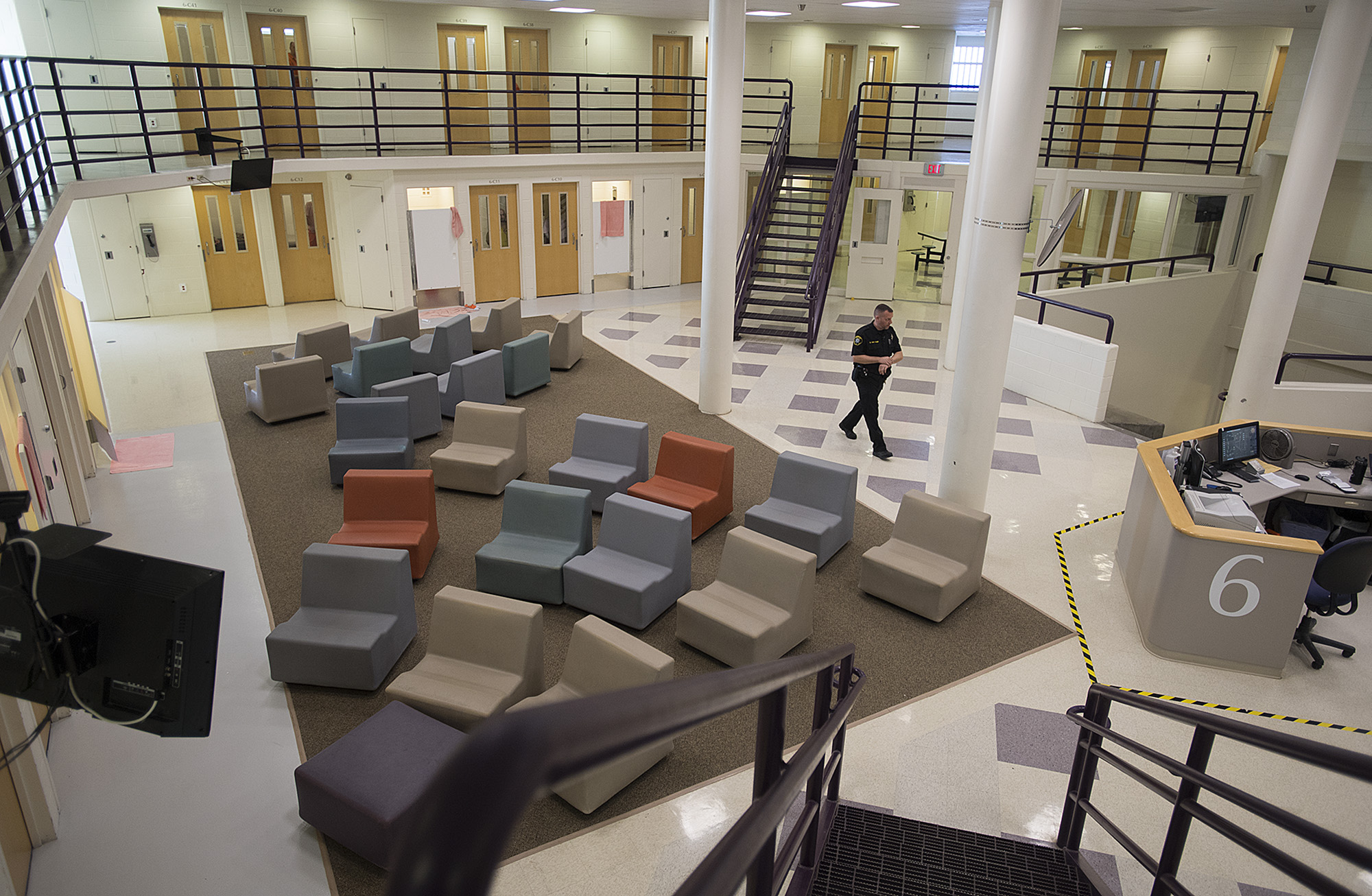 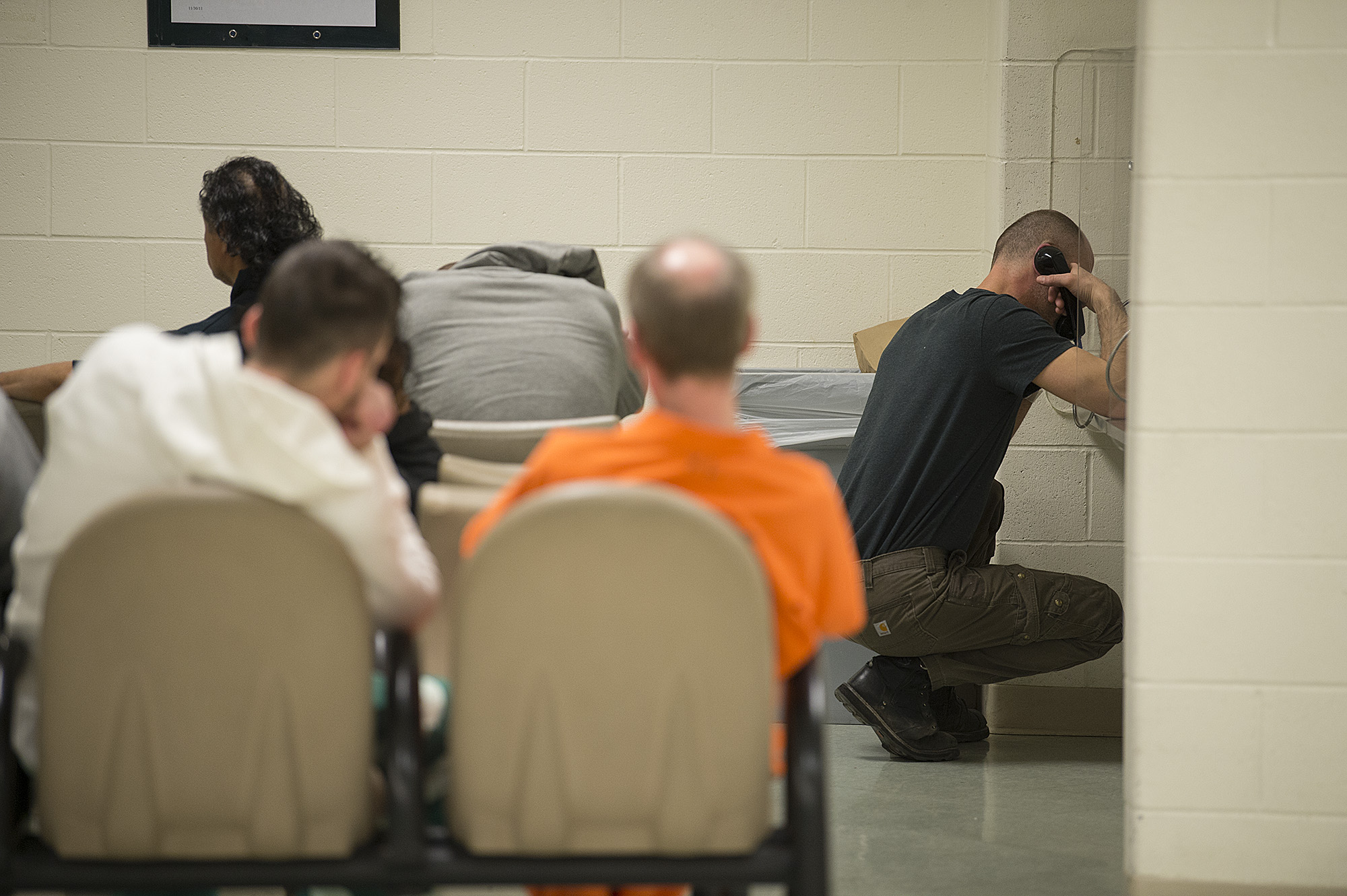 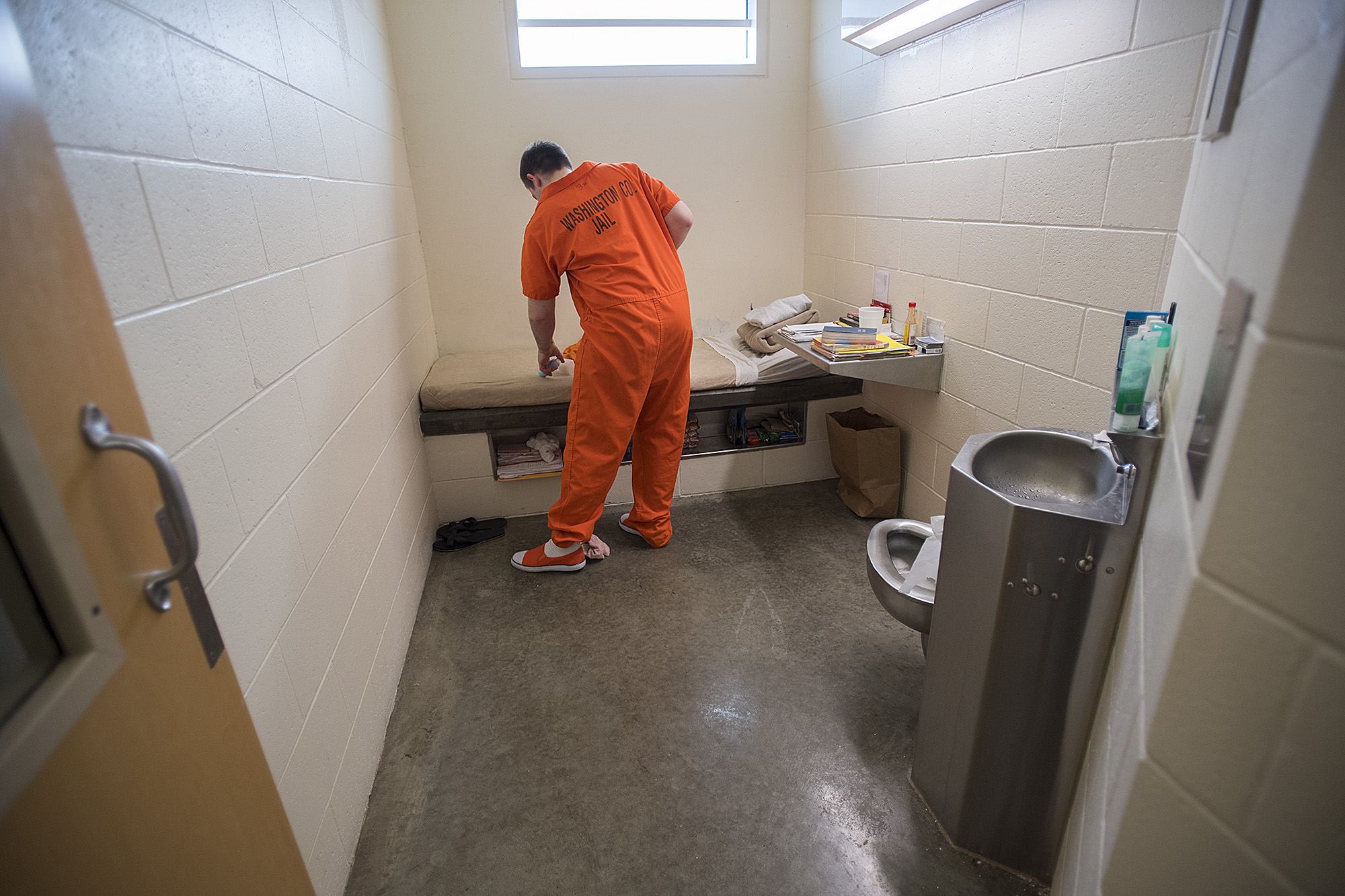 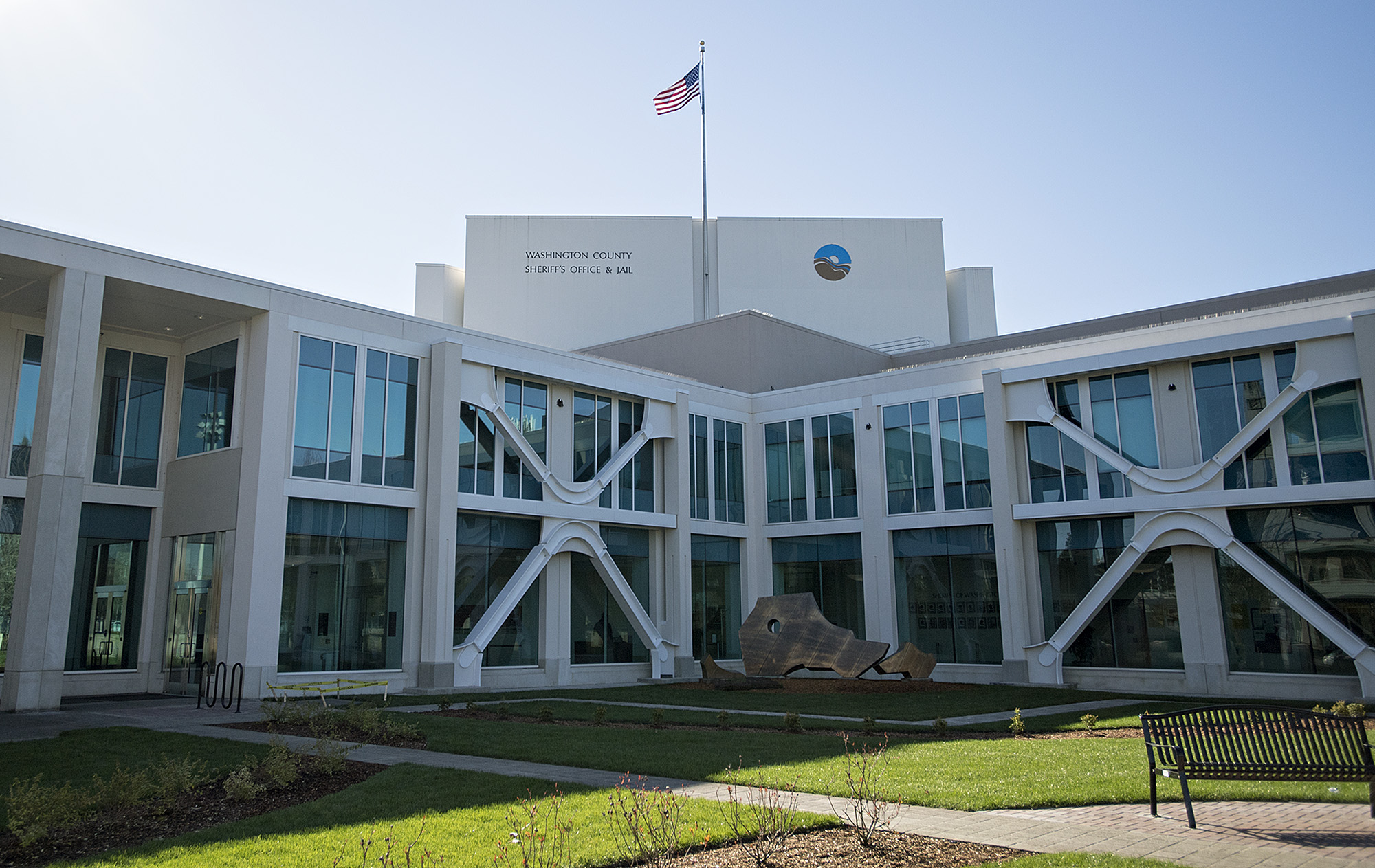 The intake area of the Washington County Jail has the feel of a DMV or a bus station. On a weekday afternoon, about 20 people sat in rows of chairs calmly watching “Bringing Down the House,” a 2003 comedy starring Steve Martin and Queen Latifah. Some wore street clothes awaiting booking. Others wore orange prison garb or the green and white striped pants for female inmates.

If inmates need to make a phone call, use the bathroom or have a question, they raise their hand, Frohnert said.

“Our goal from the get-go is to motivate people to act on their best behavior,” said Frohnert.

If they act up, they’ll be placed in a cell. Frohnert explained that the jail’s design is premised on the idea that if an inmate follows the rules, life will be easier.

The jail includes one high-security living unit where inmates are kept in their cells most of the day. An inmate will end up there if they fight, are caught with drugs, make a weapon or display “significant disrespect,” said Frohnert.

Deputies directly supervising inmates have a button attached to their uniform they can press to summon a squad of armed officers. If an inmate causes that button to be pressed, they’ll land in the high-security unit.
Despite the different physical environments, both Frohnert and Bishop have the same goal for inmates: Don’t come back.

by Jake Thomas
Next: Homeless in Clark County