Billimon “Birdy” Billimon works a night shift at Portland International Airport and then takes morning classes toward his high school diploma — all on top of caring for an 11-month old daughter.

“Our philosophy is, whatever it takes to get them on the property, then that’s what we’re going to use to get them here, and let everything else fall into place.” The Rev. Jamie Kingsbury, New Life Friends pastor

Boxing, he said, tapping at one of the heavy bags hanging from the ceiling in Lord’s Gym’s makeshift boxing gym, helps even him out.

“When I started the first class, I was kinda like a bad boy, a bad influence,” said Billimon, 19. “I started coming to practice every day, and I put all the bad things aside and just focus on what I want, what I need in life, what I want to see where I can be in life.”

Billimon is one of the regulars with Clark County’s youth boxing program. The group has been meeting three days a week since September.

The task force has organized a boxing program before. The current program, at Lord’s Gym on Fourth Plain Boulevard, is its latest iteration.

The program operates as a partnership through the task force, the church that manages Lord’s Gym, and MFA Boxing, coach Tony Adams’ nonprofit boxing training business. 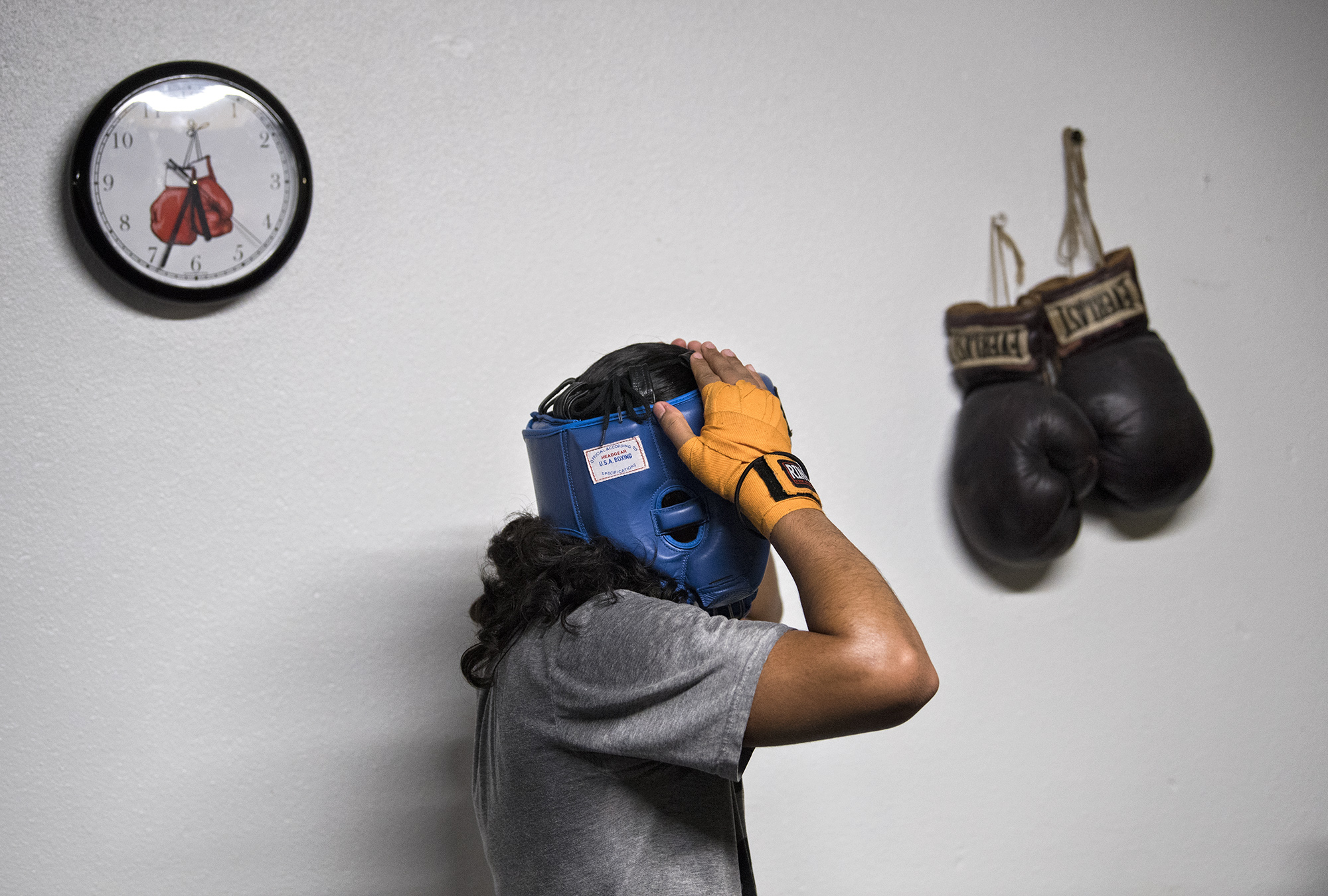 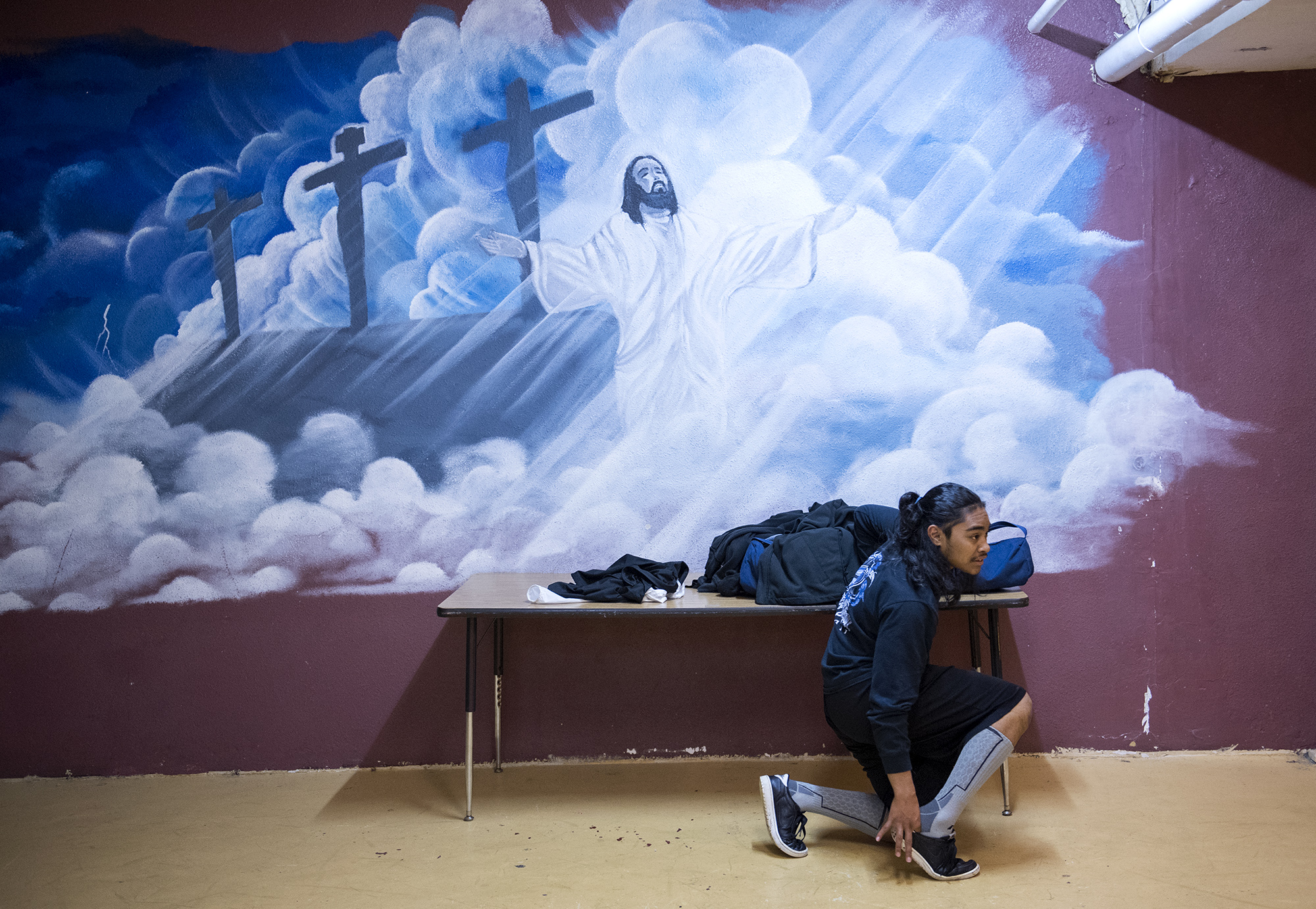 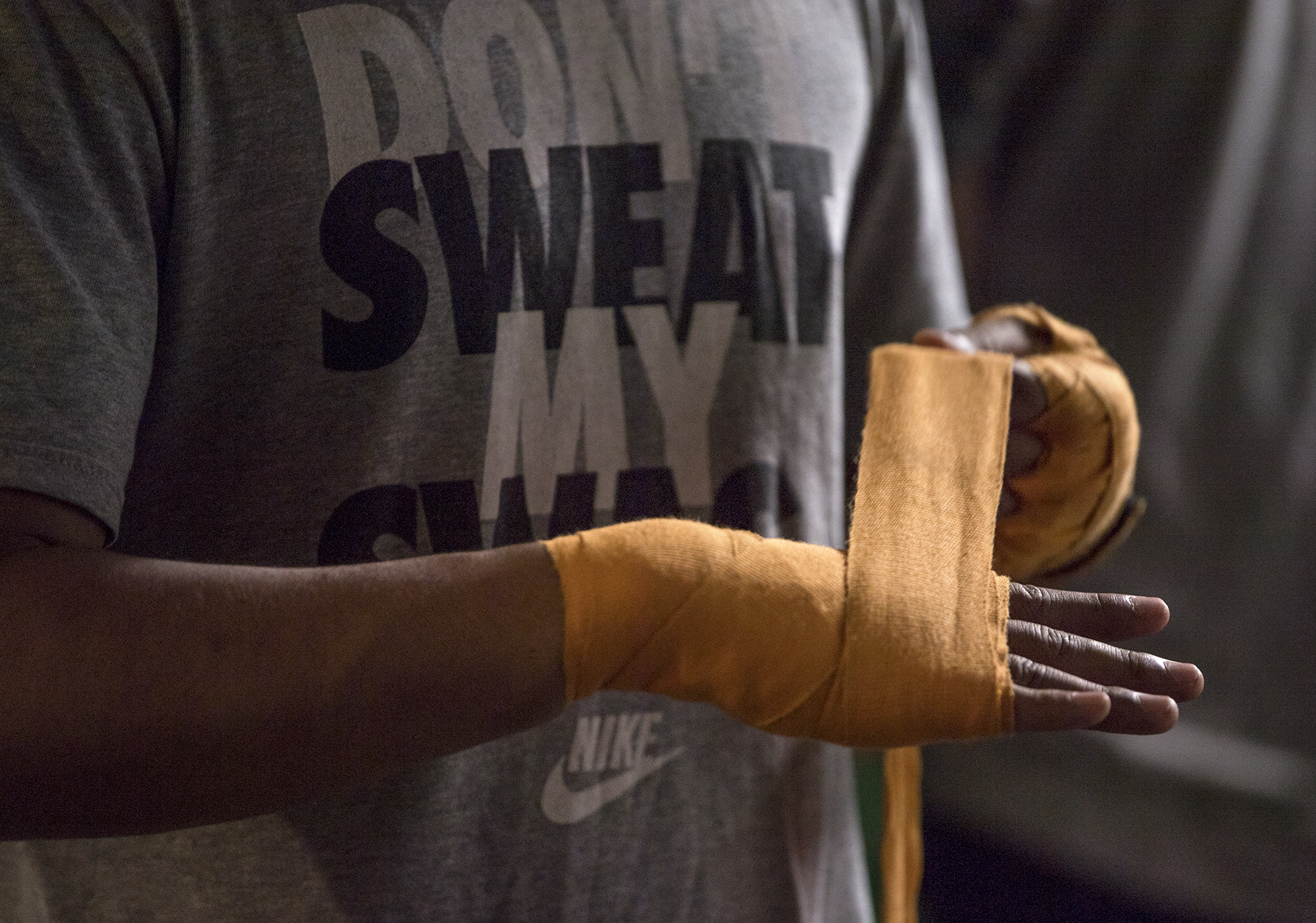 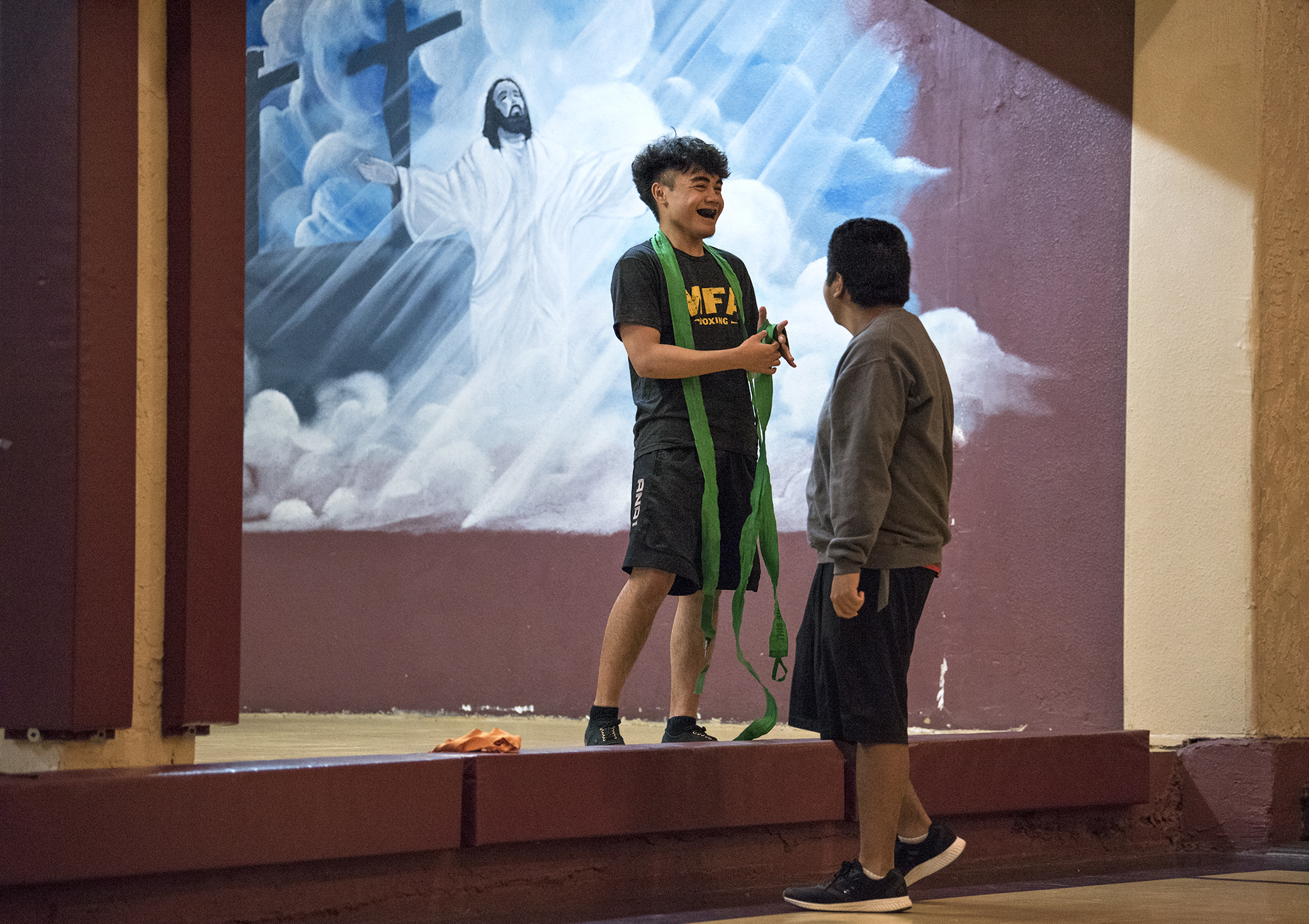 In previous years, an LA Fitness hosted training, but it was challenging because the company needed the kids to have memberships, which was complicated because so many people would quickly cycle in and out, Beaman said.

The program went on hiatus for about a year and a half, and Beaman started looking for new partners. Beaman met with New Life Friends Church leaders, and over several months, persuaded the board to give it a shot.

It’s a good fit, said the Rev. Jamie Kingsbury, New Life Friends pastor, because the idea behind Lord’s Gym has always been trying to reach young people before they take a wrong turn.

“Our philosophy is, whatever it takes to get them on the property, then that’s what we’re going to use to get them here, and let everything else fall into place,” he said.

Some members of his team initially had reservations about the idea of bringing boxing to the facility, he said, but there were people who left the church when they put up basketball hoops in the Lord’s Gym sanctuary.

“We’re like, you’re missing it. This is bringing people off the street,” he said. “There are kids out there that are never going to box a day in their life. But it’s got them here, it’s teaching them something.”

Beaman said a couple of area contractors, who grew up being the same kind of at-risk kid the program aims to help, agreed to remodel an upstairs space at Lord’s Gym on spec, adding some punching bags and other equipment.

Currently, organizers want to build a solid core group of roughly a dozen regular participants. Beaman said that would help keep the program stable and help build a steady roster of boxers. Once that happens, they want to expand the Monday-Wednesday-Friday schedule to include Tuesdays and Thursdays, so there’s more time to coach to different skill levels — and maybe even allow some of the more senior members to start training others.

That may take time, Adams said. Lots of people fall in love with boxing once they get a taste, but it demands commitment to make progress. Not everyone, because of where they are in their lives or simply taste, can make it.

“You gotta run, you gotta eat right, you gotta not party in order to be successful in the ring,” he said. “A lot of them enjoy it, then decide it’s not for them because it’s too hard.”

“That’s all people. I view all kids as ‘at-risk.’ They’re all at risk of not discovering what their true potential is,” Adams said. 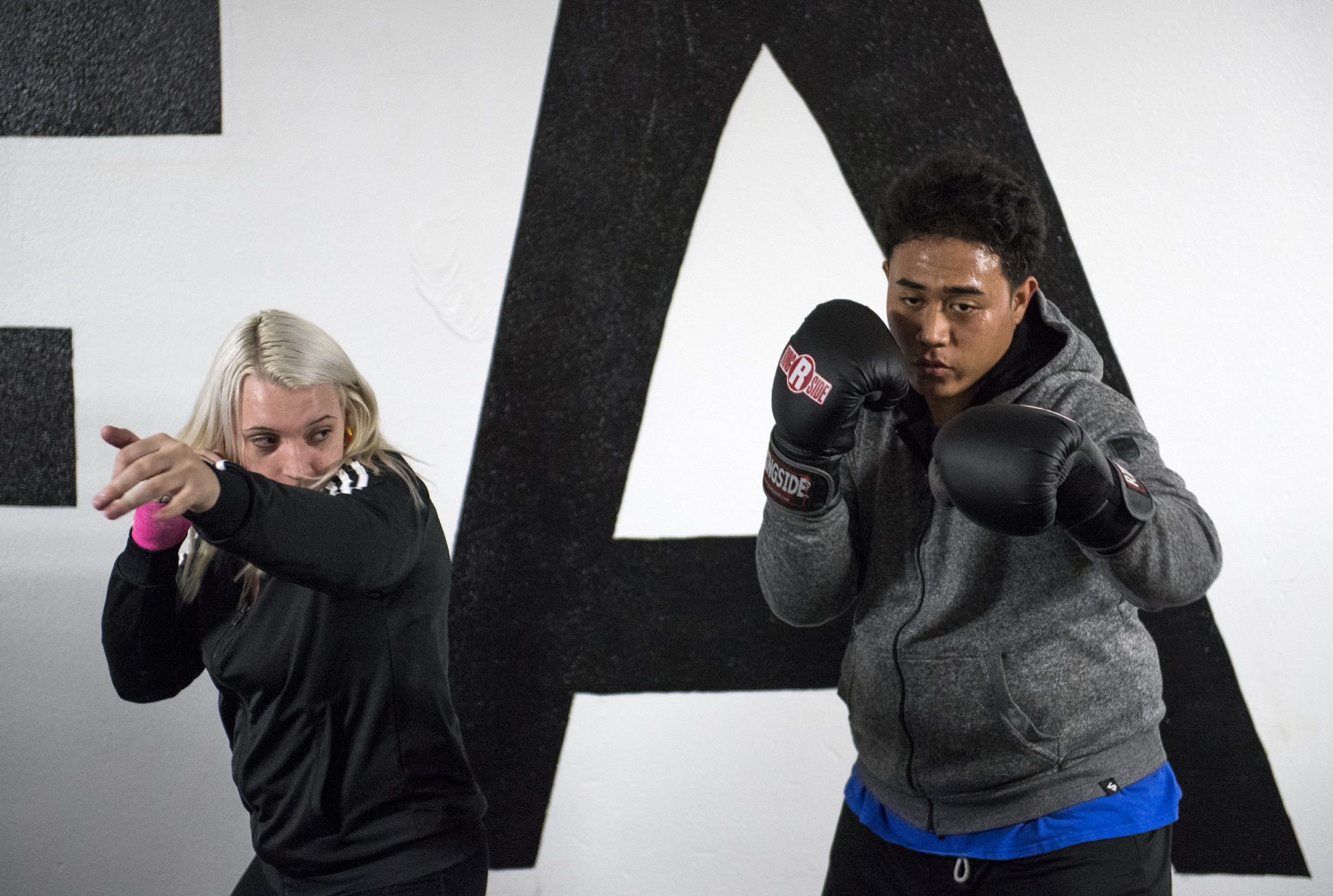 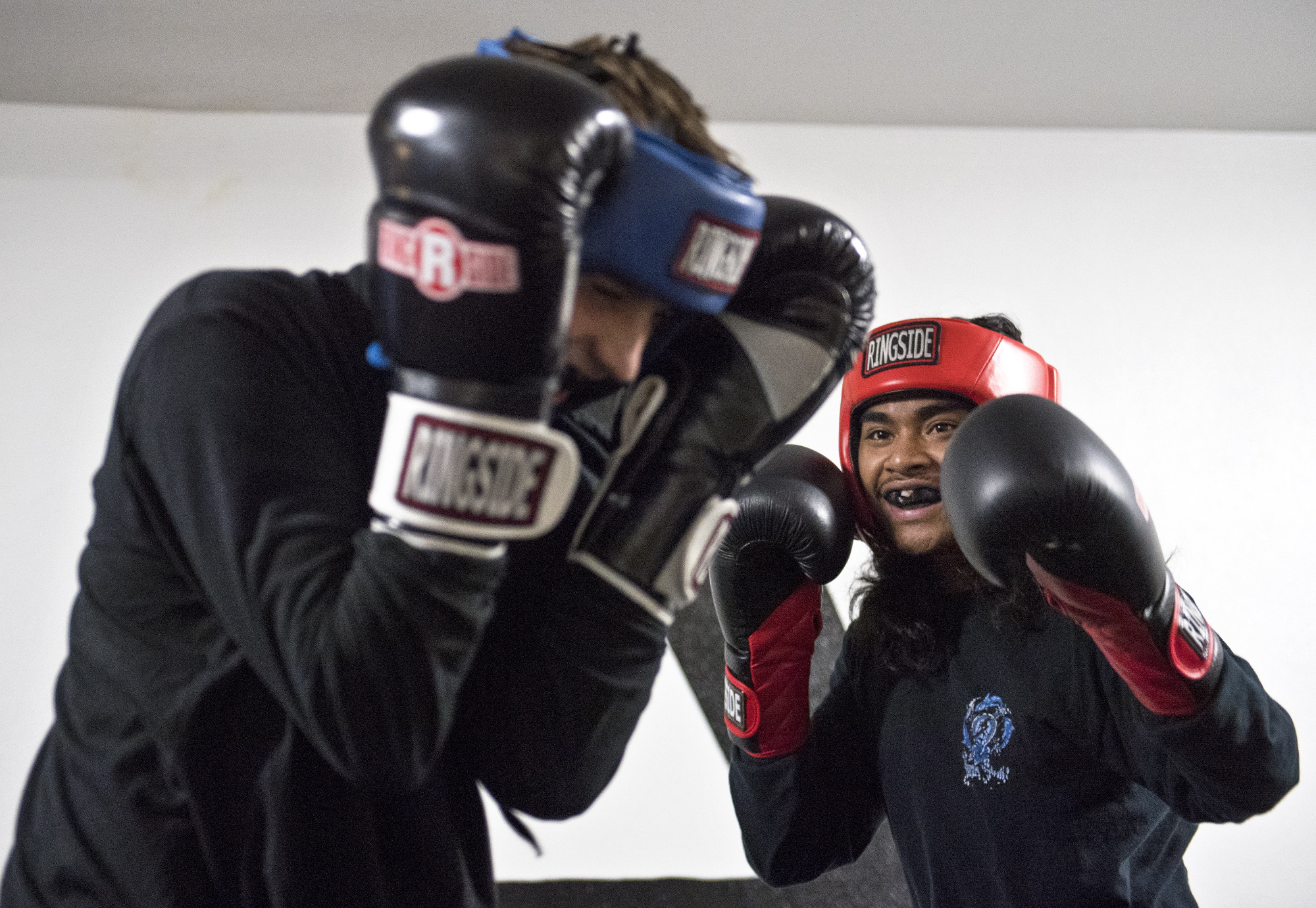 Part of the deal to participate, Beaman said, is that boxers have to show some kind of progress in school or professionally. That means better grades or attendance, or finding a job.

Indeed, as more young people are showing up, Kingsbury and Beaman have been able to bring in people to help facilitate that, through homework help and fixing up some computer equipment in the building. They’re also thinking about adding weight training.

Before he moved to training, Adams was working on a master’s degree in secondary education. Boxing, he said, is just another kind of learning.

“Through boxing we can do a lot of things,” Adams said. “It’s powerful for the ones that really get it and enter into it.”

He sees the program as a blueprint toward success in life. A lot of the young people he works with have yet to leave the nest, which makes now a good time to learn about hard work and time management, before jobs, relationships and paying the bills becomes as great a worry.

Josh Beaman, program coordinator for the county’s Safe Communities Task Force and one of the organizers for the boxing program at Lord’s Gym, said more are welcome to join, but space is limited. Participants must be between 13 to 24 years old, and those with questions can contact Beaman at 360-397-2075 ext. 5204 or josh.beaman@clark.wa.gov.

His speciality, he says, is spotting the ways young boxers try giving up on themselves. Boxing, like all those other things, is supposed to be hard. Everything in life is, he said, and boxing can help train young people to work through that impulse to quit.

“If it’s for you, you’re going to find more about yourself than you ever did,” Adams said.

Billimon is one of the more experienced members of the program, having participated in its earlier versions, as well. He said he’d been prodding Beaman about getting it up and running again, and joining back up.

In part, he said, the program saved him.

Not long ago, he was getting into drugs and making poor choices. Beaman helped get him a stint with a boot camp program through the Washington Youth Academy.

“It made me remember who I am, because I almost lost myself,” Billimon said. “I came back out and here I am, back in the gym, because, man, I wasn’t who I was before,” he said. “I love boxing, because it saved me.”

It keeps him in shape and his stress and anger in check.

“If I need somebody to talk to or to, like, let my anger out, I could just hit the bag until I gas out,” Billimon said. “Too tired to be mad.”

He persuaded his younger brother to join, as well, which made their mother happy.

“He’s not just in the house playing games,” he said.

Shadows of the past look different by candlelight at Fort Vancouver

by Tom Vogt
Next: Five Years of Love