Movin’ on up to Cowlitz County

First-time homeowners Nick and Nichole Ault live on a tree-lined street in Longview that’s a five-minute walk away from lovely Lake Sacajawea and about 1½ miles from Lower Columbia College, where Nichole plans to study engineering. Before this, the Aults, both 23, rented a two-bedroom townhouse in Vancouver’s Cascade Park neighborhood.

“Our mortgage is less to live here than our rent was,” Nichole said. The mortgage is $1,001; the rent was $1,035. And, “We’ve never really liked being apartment dwellers,” she said.

The Aults, who met at Evergreen High School, were longtime Vancouver residents until recently. Their fruitless search for a home to buy in Vancouver led them to look outside the city and eventually outside the county. They found nothing suitable in Clark County in their desired price range of less than $180,000, or $200,000 at the very maximum.

Their two-bedroom, one-bathroom bungalow in Longview cost $151,000. It has new carpet, new paint, refinished wood floors, a den that could be converted into a third bedroom and space both indoors and outdoors for their three pets. The home didn’t require any major repairs, although they replaced the old sawdust insulation. 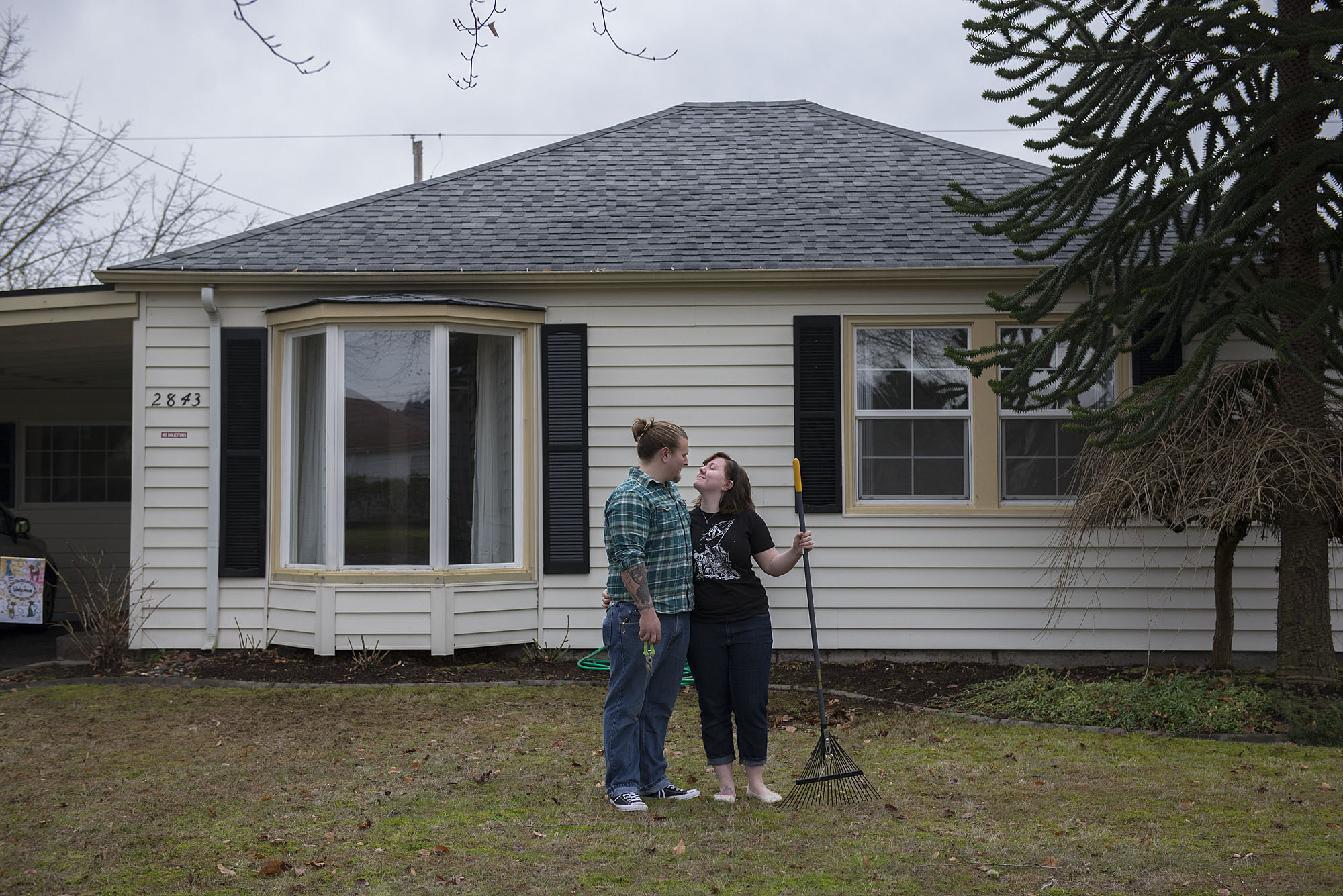 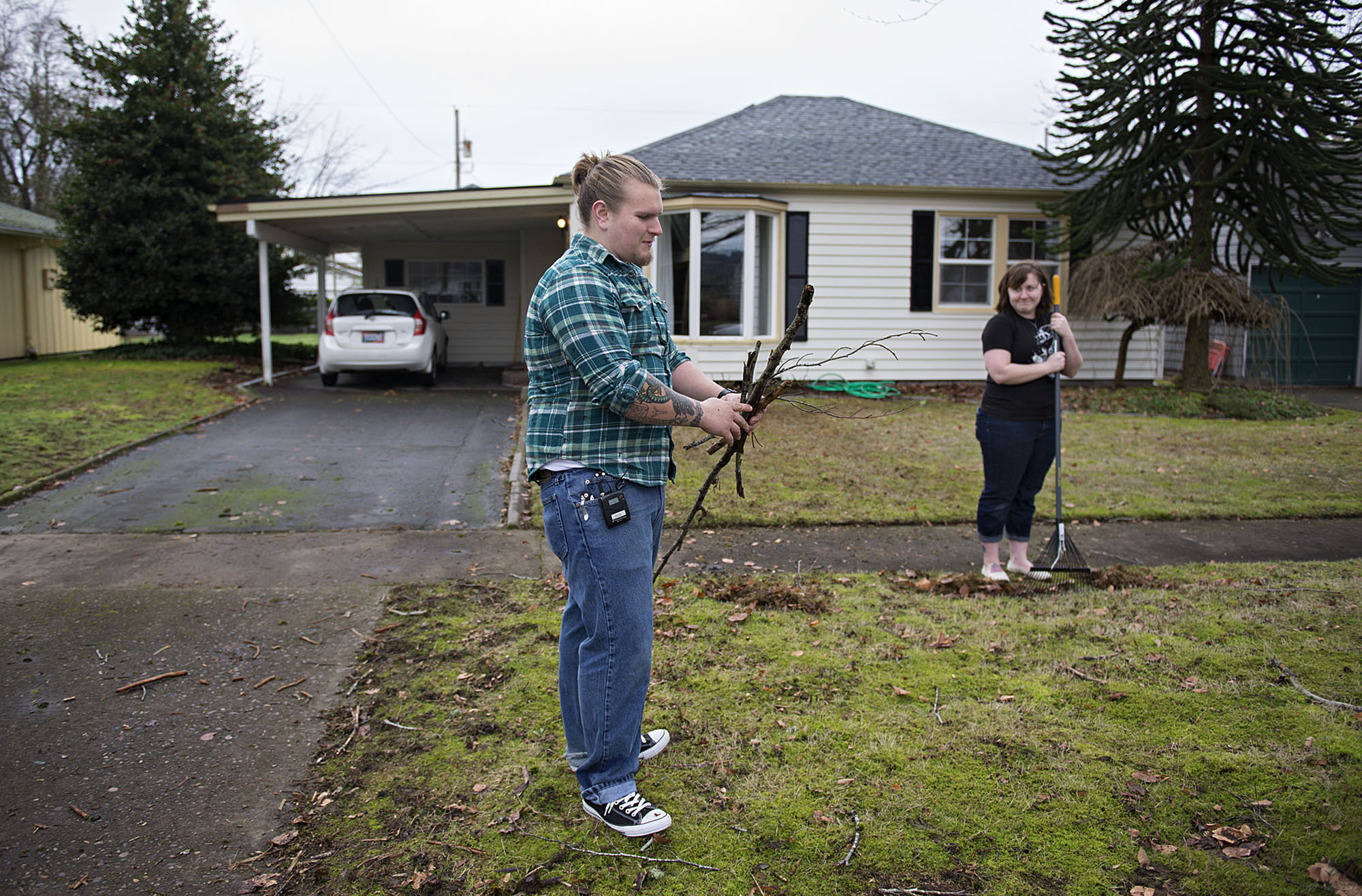 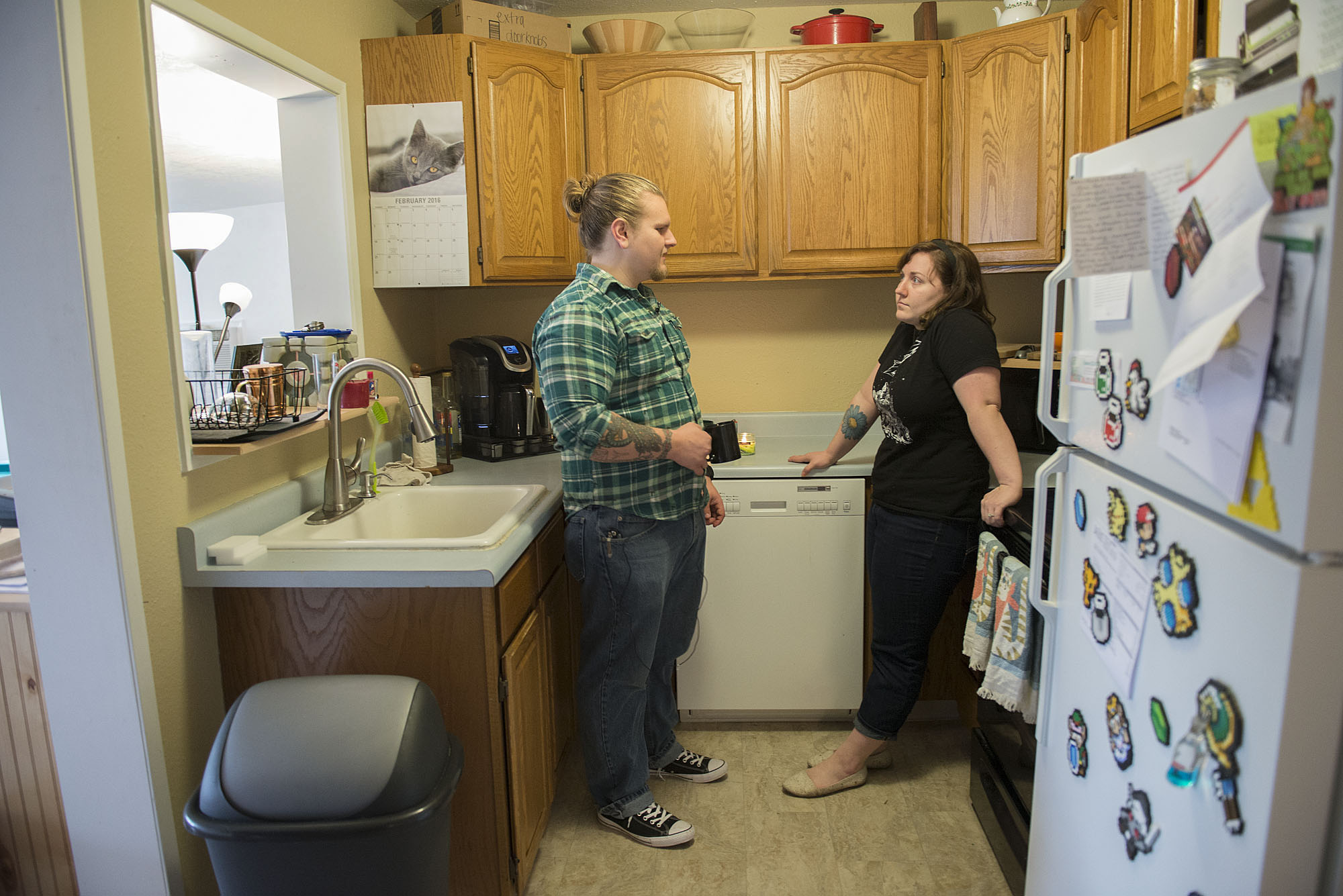 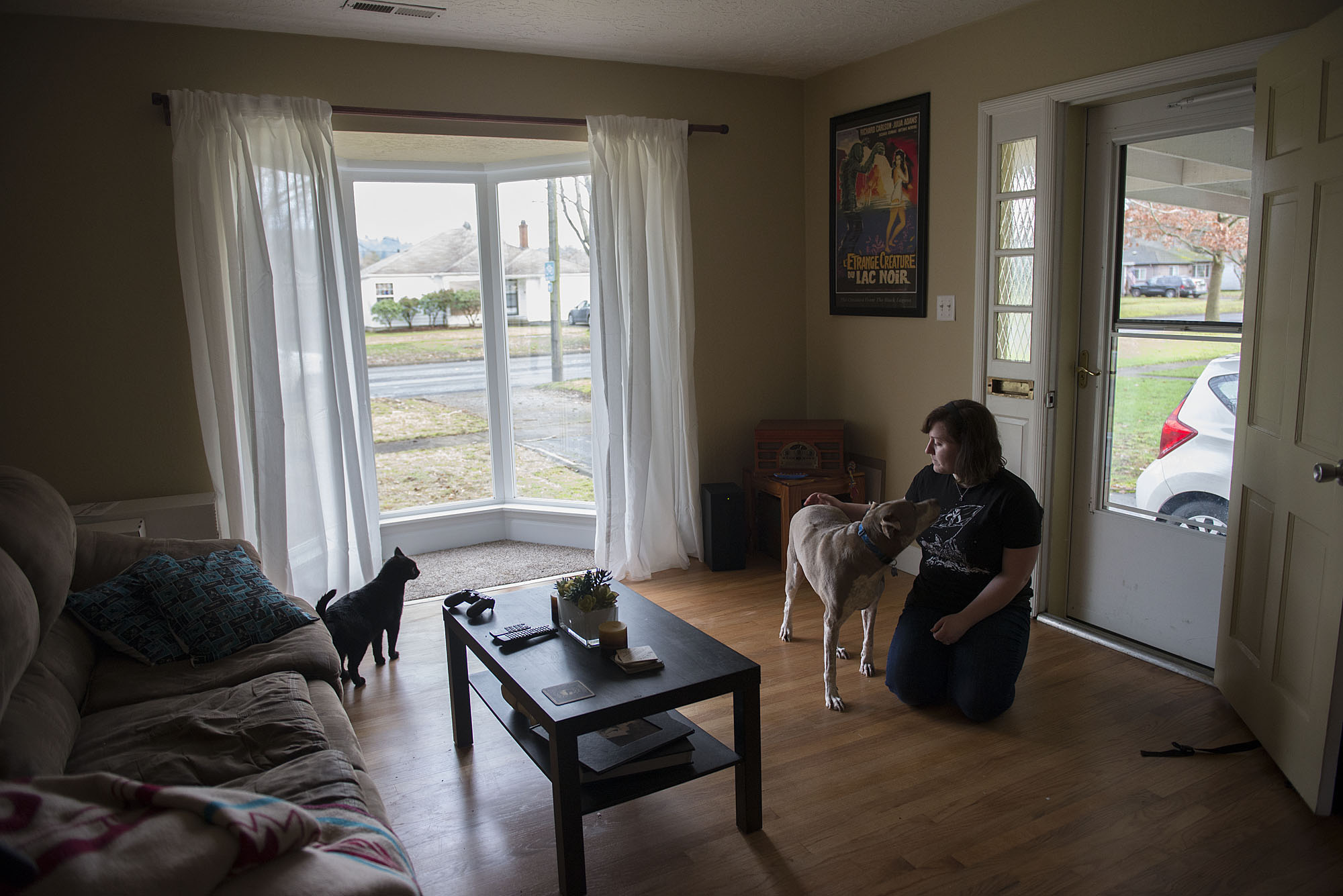 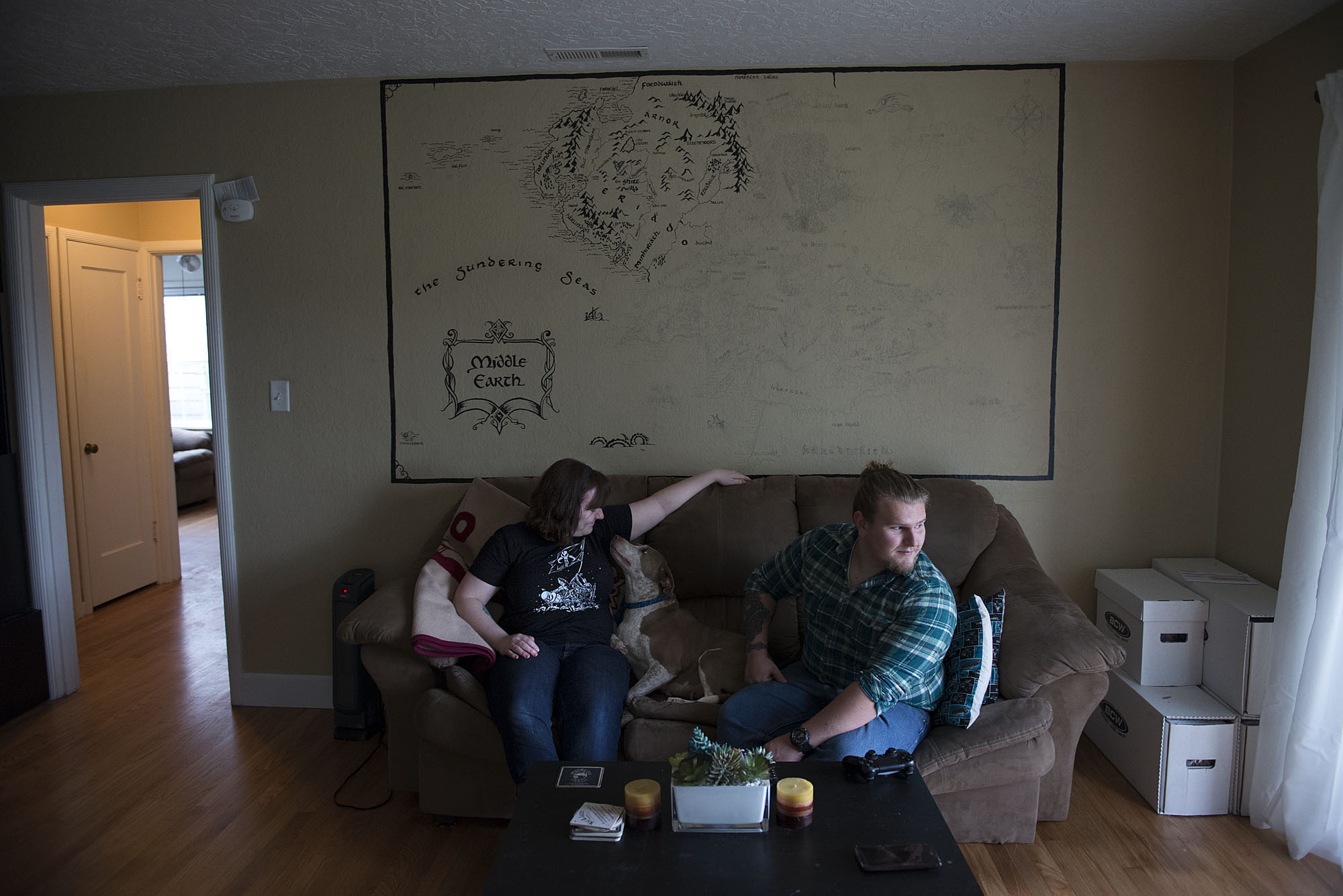 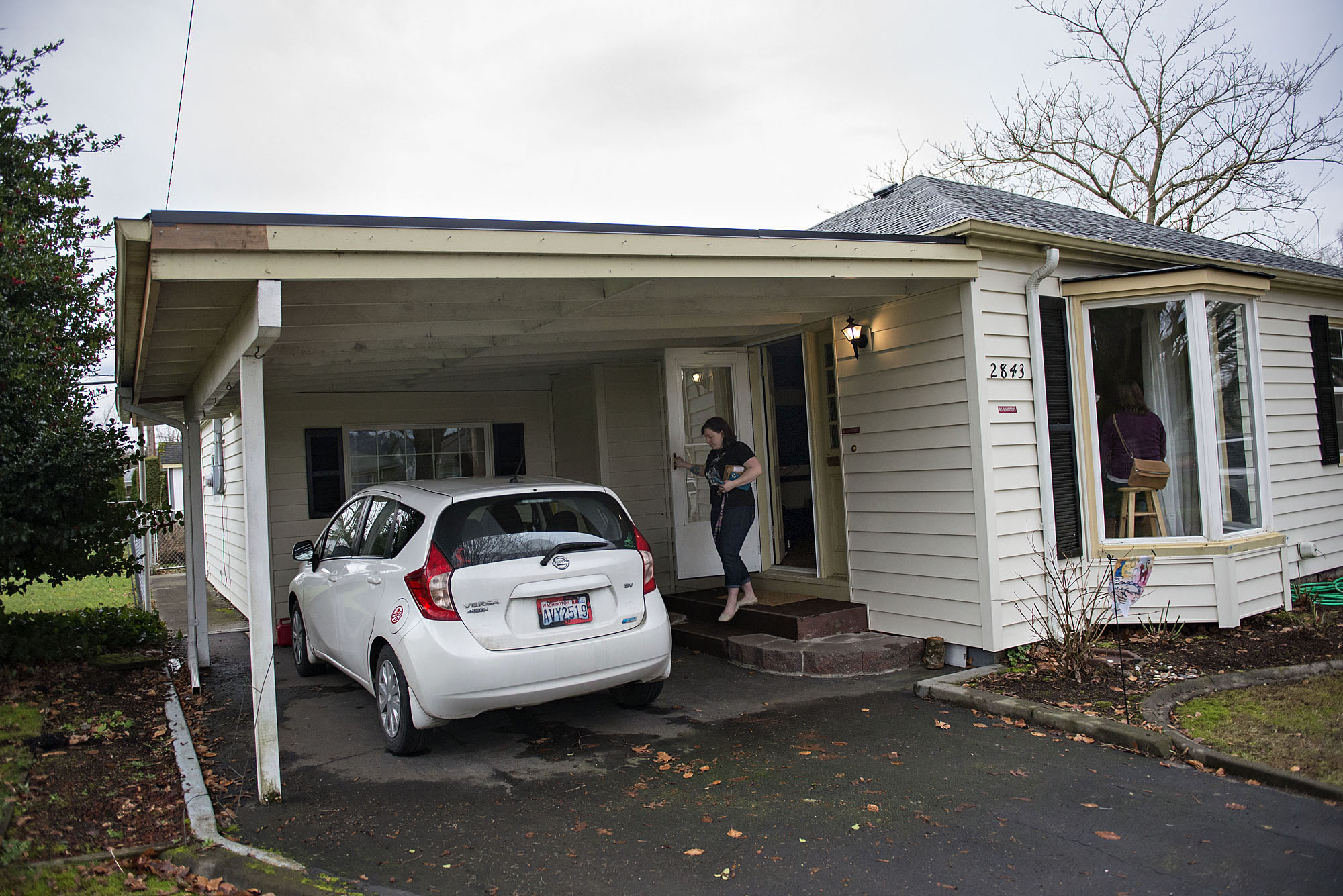 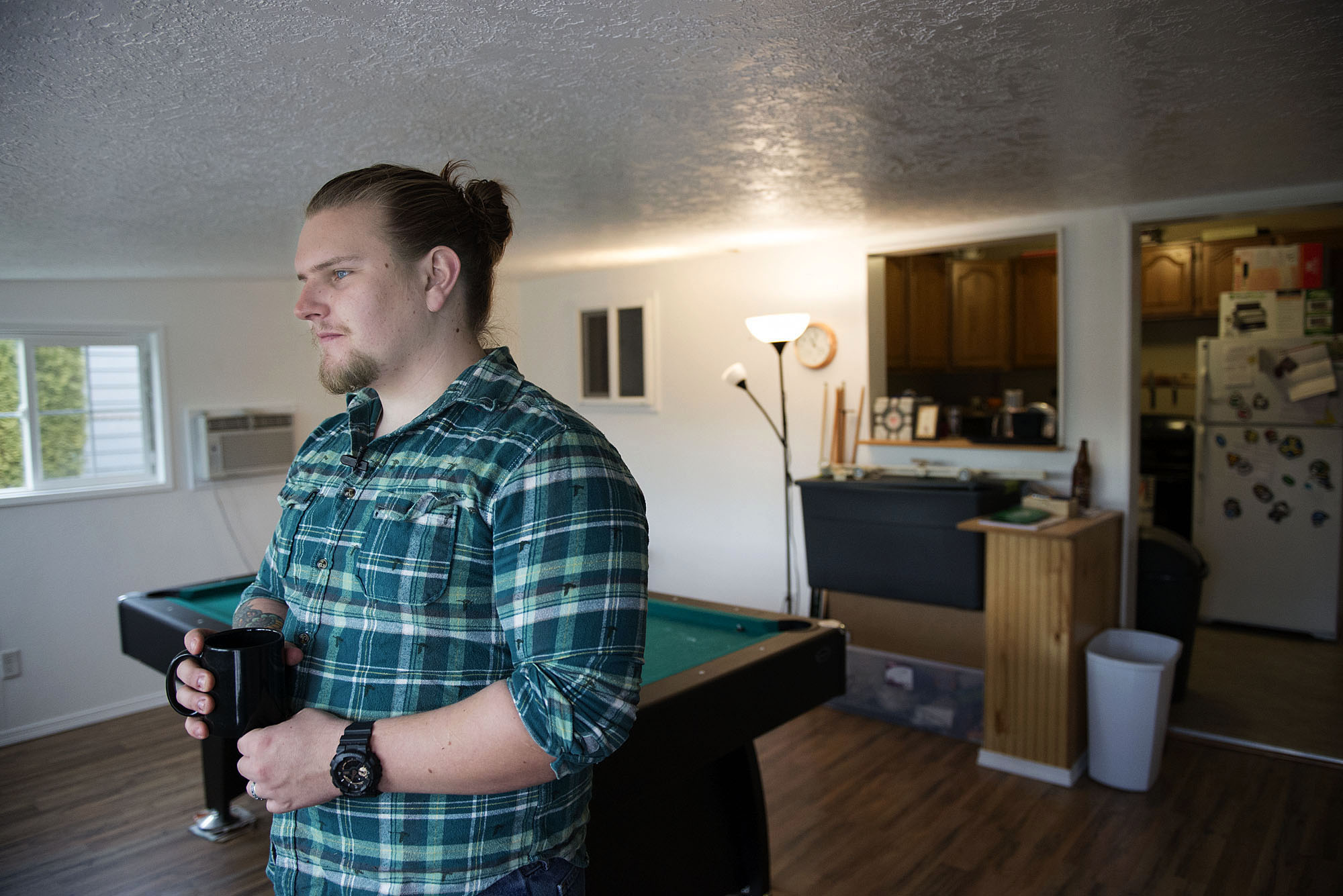 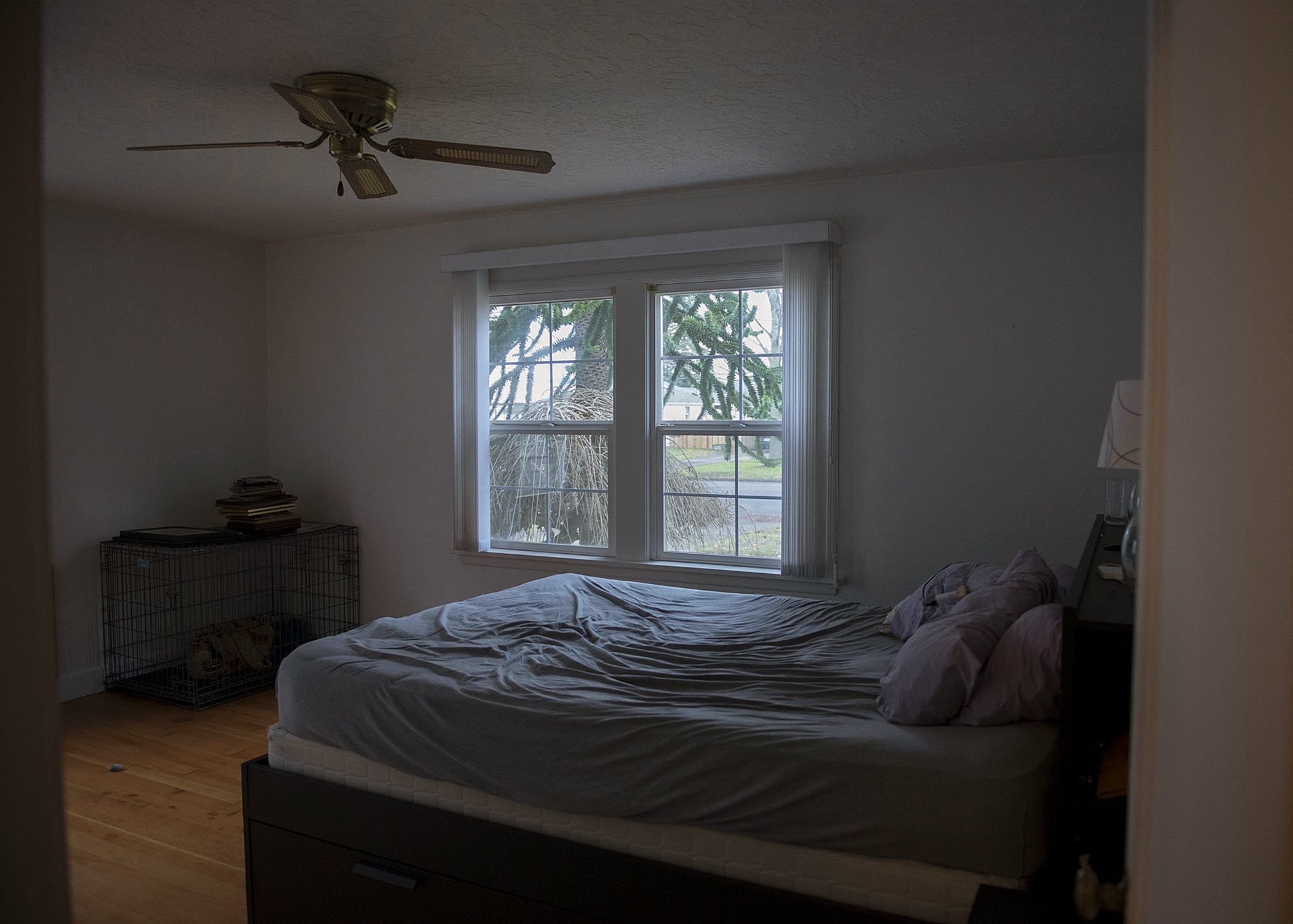 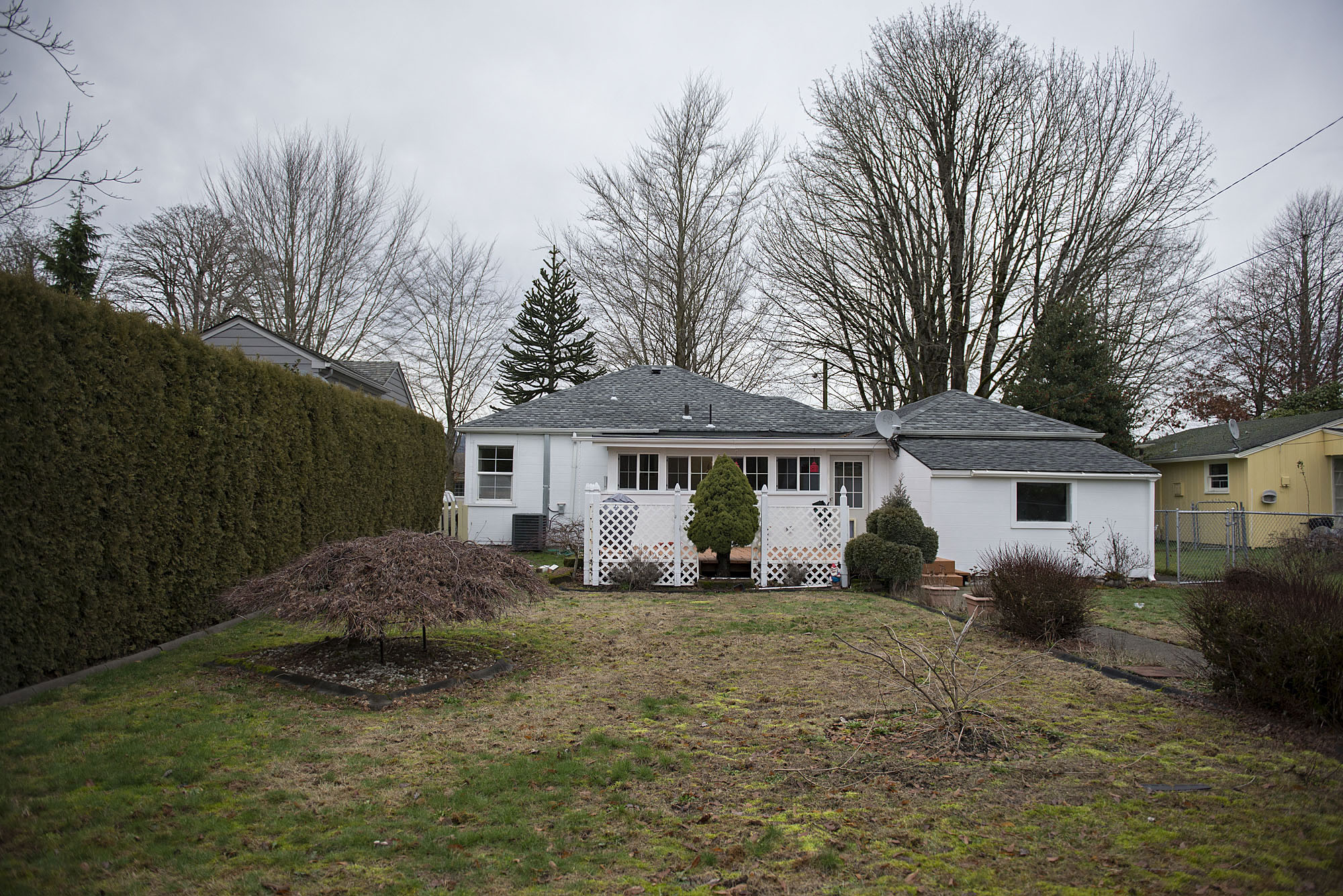 Cowlitz County is the last urban market along the Interstate 5 corridor that’s affordable to first-time homebuyers, based on data from the Runstad Center for Real Estate Studies. It’s increasingly a refuge for buyers who have been priced out of Clark County. In 2015, the median sale price of a home in Clark County climbed to $265,000, according to RMLS, a Portland-based real estate listing service, while the median for Cowlitz County homes was about $65,000 less. Buyers like the Aults are financially motivated to move to the exurbs — the areas beyond the suburbs — to get the kind of home they desire that’s also within their budget.

Perhaps it was inevitable that Clark County home prices would increase.

“Vancouver/Clark County is just always going to be a desirable place to live. If you look along the West Coast, we’re one of the last affordable markets left,” said Lee Schiller, real estate broker with RealLiving.

People have long been priced out of Los Angeles, Seattle and San Francisco. The increased demand for housing in Clark County and the greater Portland area puts upward pressure on prices. This is basic economics, Schiller said, but it comes with a twist.

Because rents are also going up, investors see the opportunity to buy entry-level homes for cash and rent them at a sizeable profit, she said. First-time homebuyers, who are often using government-backed loans that allow for lower down payments, can’t compete. The Aults looked at homes in Woodland, Washougal and Camas, but all of their offers fell through.

“The first-time homebuyer can’t afford the rent and can’t afford to buy the house,” Schiller said. “Whenever that happens, people move outward.”

These days, the largest brokerage in Cowlitz County, Coldwell Banker Bain, is working with more Clark County clients. Sales have gone up 45 percent and home prices across the county went up 14 percent from 2014 to 2015, which sales manager Mark Scroggins attributes to demand. Some people are looking for a more rural experience that’s getting harder to come by in Clark County.

“I’ve had more cash buyers this year than I’ve ever had,” he said.

Moving to the next town over to get a cheaper place is not unique to Clark County, said Peter Orser, director of the Runstad Center for Real Estate Studies at the University of Washington. People who want to buy a home in a particular city pick the closest community where they can afford to buy the kind of house they want. Clark County has long been the next place for people to go who can’t afford Portland or Multnomah County, Ore. Cowlitz County, then, has become the next place for people who can’t afford Clark County.

“We don’t grow quickly like some of the areas in Clark County,” said John Brickey, development director for the city of Longview. “I think we’re just a little too far north to see that just yet.”

With an estimated 37,130 people, the most-populous city in Cowlitz County has room to grow. The city’s infrastructure was designed to support about 75,000, Brickey said.

The city bears scars from the lingering economic recession and the loss of manufacturing jobs. Longview’s unemployment rate sits at about 7.5 percent, according to preliminary figures from the Bureau of Labor Statistics. That’s greater than the state unemployment rate of 5.5 percent and more than the Portland-Vancouver-Hillsboro, Ore., area’s rate of 4.7 percent. Median household income is $37,000 in Longview, about $13,000 less than in Vancouver, the U.S. Census Bureau says.

Kelso and Longview’s crime rates are about twice as high as Vancouver’s, though crime countywide is comparable.

Would you consider moving there? Take this poll and tell us which home would you rather live in?

Those who graduate from high school in Cowlitz County and go to college often don’t return because there aren’t enough professional jobs, said Dennis Weber, a Cowlitz County commissioner. It was tough recovering from the closure of major mills, he said.

“We definitely are open for business,” Weber said.

Buying a home in Longview means choosing among older homes. On Tuesday, there were 125 RMLS listings for 2016-built detached single-family homes in Vancouver. There were two listings in Kelso and none in Longview. Still, several subdivisions have been proposed for Cowlitz County this year, along with a multifamily complex, said Elaine Placido, the county’s director of building and planning.

Despite being new with amenities such as decent-sized yards, three-car garages and mountain views, homes at the Crown Estates subdivision built last year in west Longview were slow to sell, Maitland said. One of those homes was recently sold to a man who works in Portland.

Olin Homes is a local construction company building in north Clark County and south Cowlitz County. Sales manager John Lowe likes to tell customers that the drive to Portland International Airport is just four minutes longer from its Stone Forest subdivision in Kalama than from its Battle Ground subdivision, Parkview Trails. It helps orient people and gives them an idea of what a commute would look like from Kalama, a city of 2,500 that hugs Interstate 5.

“My biggest sale is people who can’t afford a house in Battle Ground or Clark County,” Lowe said.

Olin Homes is finishing out the current phase of Stone Forest and will start work on another group of homes up the street in September, Lowe said.

Cowlitz County’s price advantage is clear when comparing the same floor plans. At Parkview Trails in Battle Ground, a 1,522-square-foot house with three bedrooms and two bathrooms starts at $250,267. That same basic house on the same-sized lot in Kalama costs $219,444. The only different feature is the Kalama home comes with air-conditioning standard but the Battle Ground home does not, Lowe said.

“What changes the cost is the permits and the land,” Lowe said.

There are no impact fees in Cowlitz County because the county is not subject to the state Growth Management Act, said Nick Little, deputy director of building and planning in Cowlitz County. Clark County is fully zoned and Cowlitz County is partially zoned, though both have comprehensive plans and land-use laws.

“If you wanted to build a Wal-Mart 30 miles out in Cougar, we have no land-use law that says you can’t do that,” Little said. “We are not required to protect anything. We are required to identify and inventory it, and that’s it.”

“It’s not advantageous at all to see homes — from an industry standpoint — get unaffordable to most people,” he said. When home prices go up but wages don’t, the buyer pool shrinks. “I build homes that I would have a hard time affording,” he said.

It’s not just the increasing price of land, where standard lots range from $90,000 to $160,000, it’s also the fees and requirements that add to the starting costs, he said.

In Ridgefield, for instance, developers are required to devote 25 percent of the land they’re developing to parks and trails. That cost is passed to buyers, Harroun said. Impact fees, mandating certain lot sizes and lag times in processing building proposals all add to the cost of a home before the builder even pours the foundation, he said.

One solution, he said, is to reconsider the rules and make zoning more flexible to promote a wider variety of homes, such as duplexes, row houses and cottage-style houses, possibly all mixed in neighborhoods with single-family homes and apartments. Harroun once built three homes on a single parcel in uptown Vancouver, showing what a builder could do with denser, more flexible planning. With less land available to develop, he said it’s time for homebuilding to get creative.

“This is important because we’re talking about the places people call home,” Harroun said. “People shouldn’t have to move to Cowlitz to find an affordable place to live.”

The Aults already made their move and have no plans to leave Longview until, perhaps, Nichole finishes her degree. Besides making financial sense, it evened out their work commutes. Nichole’s drive to Georgia-Pacific in Clatskanie, Ore. dropped from 1½ hours to about 40 minutes when they moved. Nick, however, who works at PDX as a baggage handler, saw his commute jump from 10 minutes to 50 minutes.

“It was a good compromise,” he said.

In January, two homes, one in Longview and one in Hazel Dell, were listed on RMLS, a Portland-based real estate listing service, for the same price, $269,900 — just a few thousand over the median. Both are older, recently remodeled homes in established neighborhoods and both have four bedrooms.

The Hazel Dell home at 6607 N.W. Fourth Ave. is just south of Hazel Dell Elementary School and a few minutes’ drive to nearby shopping along Northeast 78th Street. It’s 1,569 square feet, has two bathrooms and a one-car garage. The front and backyards are, for now, dirt; the seller will plant grass seed in the spring, a flier said.

From the front yard, the Longview home at 1226 Spruce St. looks like a similar-sized, ranch-style home. But, it actually has a finished daylight basement that brings the square footage up to 3,020. It has 2.75 bathrooms, a two-car garage and sits on 0.27 acres with a stream running through the backyard. It’s a few minutes’ drive to the Triangle Shopping Center or Twin City Shopping Center, both strip malls off Ocean Beach Highway. Down the street is Lower Columbia College and Mark Morris High School.

So, the question is: Where does a potential buyer want to live and what kind of home are they willing to pay for? Lee Schiller, a real estate broker with RealLiving, said homebuyers should consider schools and work commute time before deciding. She said it’s a matter of having access to the things a family needs, such as health care, grocery stores and entertainment.

The Hazel Dell home has a pending sale at $269,900. The Longview home is still on the market, the price having been reduced to $259,900, said Jon Cacabelos, real estate broker for Real Home Network. A potential buyer put in a low offer, he said. Similar but smaller homes in the neighborhood have sold for about $240,000. Cacabelos said he’s seen home prices rise in Longview; the current prices are about where Clark County was at three years ago, he said. “We’re getting buyers that really had nothing to do with Longview two years ago,” Cacabelos said, adding that buyers also have come from Portland and Olympia.

by Patty Hastings
Next: 60 Seconds

by Lauren Dake and Ariane Kunze